Atlantic spotted dolphins are found in warm temperate and tropical waters of the Atlantic Ocean. They usually form groups of five to 50 individuals but sometimes travel in groups of up to 200. They are fast swimmers and often “surf” in the waves created by vessels.

Young Atlantic spotted dolphins do not have spots. As a result, they can look like slender bottlenose dolphins. Their distinctive spotted pattern starts to appear all over their bodies as they get older.

Atlantic spotted dolphins, like all marine mammals, are protected under the Marine Mammal Protection Act.

NOAA Fisheries and its partners are working to conserve Atlantic spotted dolphins and further our understanding of this species through research and conservation activities.

To manage Atlantic spotted dolphins in U.S. waters, we have divided them into three stocks:

Atlantic spotted dolphins are about 5 to 7.5 feet long and weigh about 220 to 315 pounds. They have a robust body with a tall, curved dorsal fin located midway down their back. Their beaks are moderately long. Like other cetaceans, their head has a distinctive melon, a rounded forehead that collects sounds from the environment. They have 30 to 42 pairs of small, cone-shaped teeth in each jaw.

Atlantic spotted dolphins are usually found in groups of less than 50 individuals but sometimes travel in groups of up to 200. In coastal waters, groups usually consist of five to 15 individuals. Within these groups, the dolphins are sometimes organized by age or sex. Atlantic spotted dolphins blow bubbles through their blowholes as one way to communicate with members of their group. They also communicate with sound.

Atlantic spotted dolphins are often described as “acrobatic” swimmers, frequently leaping out of the water or jumping at the water’s surface. They can also swim very quickly and often “surf” in the waves created by vessels. They sometimes interact with other cetacean species, such as bottlenose dolphins.

Atlantic spotted dolphins can dive up to 200 feet and have been recorded holding their breath for up to ten minutes. Most of their dives are less than 30 feet and last for 2 to 6 minutes. These dolphins eat small fish, invertebrates, and cephalopods, such as squid and octopi. They have 30 to 42 pairs of small, cone-shaped teeth in each jaw. Groups of dolphins often coordinate their movements to catch prey together. Individuals sometimes use their beaks to dig into the sand on the ocean bottom to catch hidden fish.

Atlantic spotted dolphins are found in warm temperate, subtropical, and tropical waters throughout the Atlantic Ocean. Their range includes the waters of the U.S. East Coast (Gulf of Mexico to Massachusetts), the Bahamas, Brazil, the Azores and Canary Islands, and Gabon. Warm currents such as the Gulf Stream may affect their distribution.

Atlantic spotted dolphins prefer the waters along the continental shelf (the edge of a continent below the ocean’s surface). They usually live in coastal or continental shelf waters that are 65 to 820 feet deep, but are found in deeper oceanic waters in the northern part of their range.

The estimated lifespan of Atlantic spotted dolphins is unknown. They reach sexual maturity when they are 8 to 15 years old. Females give birth to a single calf every 1 to 5 years. Mothers nurse their calves for 1 to 5 years.

One of the main threats to Atlantic spotted dolphins is getting caught in fishing gear. Dolphins can become entangled or captured in commercial fishing gear such as gillnets and purse seines. These interactions can cause dolphins to be injured or killed by entanglement in the gear.

NOAA Fisheries is committed to the protection of Atlantic spotted dolphins. Targeted management actions taken to secure protections for these dolphins include:

Dolphins fed by humans lose their natural wariness and learn to associate people with food, causing them to beg for handouts and take bait and catch directly from fishing gear. This puts them at risk from vessel strikes and becoming entangled in or ingesting fishing gear. Dolphins may teach these behaviors to their young, thereby putting them at risk.

More on protecting wild dolphins and admiring them from a distance 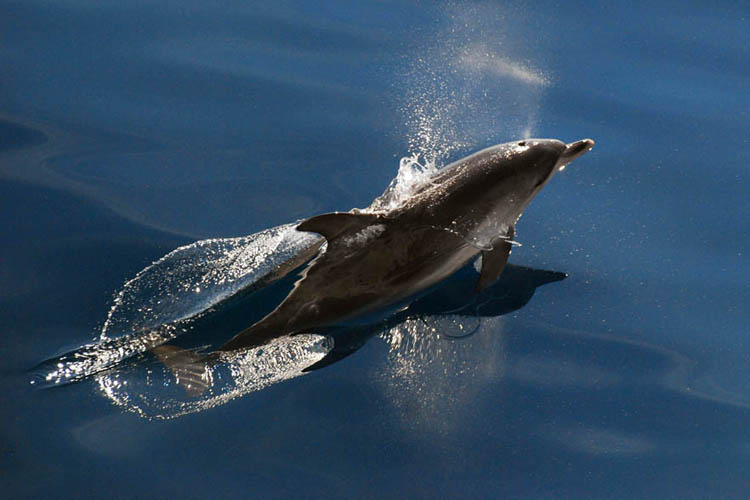 Underwater noise threatens dolphin populations, interrupting their normal behavior and driving them away from areas important to their survival. Increasing evidence suggests that exposure to intense underwater sound in some settings may cause some dolphins to strand and ultimately die. NOAA Fisheries is investigating all aspects of acoustic communication and hearing in marine animals, as well as the effects of sound on whale behavior and hearing. In 2018, we updated the marine mammal acoustic technical guidance for assessing the effects of anthropogenic (human-caused) sound on marine mammals’ hearing.

All marine mammals, including Atlantic spotted dolphins, are protected in the United States under the MMPA.

NOAA Fisheries conducts various research activities on the biology, behavior, and ecology of Atlantic spotted dolphins. The results of this research are used to inform management decisions for this species.

Scientists observe Atlantic spotted dolphins to record their numbers and distribution. By comparing numbers collected over multiple years, scientists can look for trends—i.e., whether the population is increasing, decreasing, or remaining stable during a given period.

Biological Opinion on the Issuance of Permit No. 20455 to Randall Wells for Research on Bottlenose and Atlantic Spotted Dolphins

This biological opinion is NOAA Fisheries' opinion on the effects of the permit No. 20455 for…