Pantropical spotted dolphins are found in all tropical and subtropical waters worldwide. These relatively small dolphins are quite social and often associate with other dolphin species, including the rough-toothed dolphin, short-finned pilot whale, and spinner dolphin.

NOAA Fisheries is committed to conserving and protecting pantropical spotted dolphins. Our scientists and partners use a variety of innovative techniques to study, learn more about, and protect this species.

NOAA Fisheries estimates population size for each stock of pantropical spotted dolphin in its stock assessment reports. The Pacific northeastern offshore spotted stock is considered depleted under the MMPA.

Pantropical spotted dolphins are relatively small, reaching lengths of 6 to 7 feet and weighing approximately 250 pounds at adulthood. They have long, slender snouts or beaks. Like the Atlantic spotted dolphin, pantropical spotted dolphins do not have spots at birth but accumulate them as they age until they are almost completely covered with overlapping patterns. They are also distinguished by a dark cape or coloration on their backs—stretching from their head to almost midway between the dorsal fin and the tail flukes—and by a white-tipped beak.

Pantropical spotted dolphins usually occur in groups of several hundred to 1,000 animals. They are considered quite social, often schooling with other dolphin species. Although their specific migratory patterns have not been clearly described, they seem to move inshore in the fall and winter months and offshore in the spring.

Pantropical spotted dolphins spend most of their day in shallower water between 300 and 1,000 feet deep. At night, they dive into deeper waters to search for prey. They feed primarily on mesopelagic cephalopods and fish.

Pantropical spotted dolphins can be found in all tropical and subtropical oceans worldwide. The depleted northeastern offshore spotted stock inhabits the eastern tropical Pacific Ocean, far at sea. Coastal spotted dolphins are found within 100 miles of the coast. In addition, a Hawaiian stock occurs throughout the Hawaiian Islands.

In the Hawaiian archipelago, there are genetically distinct populations of pantropical spotted dolphins found between Hawaiߵi Island, Maui Nui, Oߵahu, and offshore. Animals from each population can travel 120 to 300 miles offshore, but they are generally found closer to the islands.

The maximum lifespan for pantropical spotted dolphins is 46 years. Maturity occurs around age 11. Mating and calving occurs year-round, with gestation lasting around 11 months. Lactation usually lasts 2 years, but it may be as few as for 1 year. At 3 to 6 months old, however, calves will begin eating solid food. Calving intervals depend on the population, but they range from 2.5 to 4 years.

One of the main threats to pantropical spotted dolphins is becoming entangled or captured in commercial fishing gear. Entanglement is particularly threatening for the northeastern offshore spotted stock in the eastern tropical Pacific Ocean. Some species of tuna are known to aggregate beneath groups of northeastern offshore spotted dolphins in the eastern tropical Pacific. This close association led to the fishing practice of encircling a spotted dolphin school to capture the tuna concentrated below, to the detriment of the dolphin population, which were incidentally bycaught in the nets.

Because pantropical spotted dolphins are common and abundant throughout the Hawaiian archipelago (where they are the second most frequently sighted species during nearshore surveys), interactions with people are a growing issue for the Hawaiian stock. Illegal feeding and harassment of these dolphins have been reported.

Pantropical spotted dolphins are hunted for food in Asia, Indonesia, the Philippines, and parts of the Pacific.

Our research projects have helped us better understand pantropical spotted dolphins and the challenges they face. Our work includes:

Dolphins fed by humans lose their natural wariness and learn to associate people with food, causing them to beg for handouts and take bait and catch directly from fishing gear. This puts them at risk from vessel strikes and becoming entangled in or ingesting fishing gear. Dolphins may teach these behaviors to their young, thereby putting them at risk.

More on protecting wild dolphins and admiring them from a distance

Like all marine mammals, the pantropical spotted dolphin is protected under the Marine Mammal Protection Act (MMPA). The Pacific northeastern offshore spotted stock is listed as depleted under the MMPA. NOAA Fisheries is working to conserve this species to ensure populations remain stable. 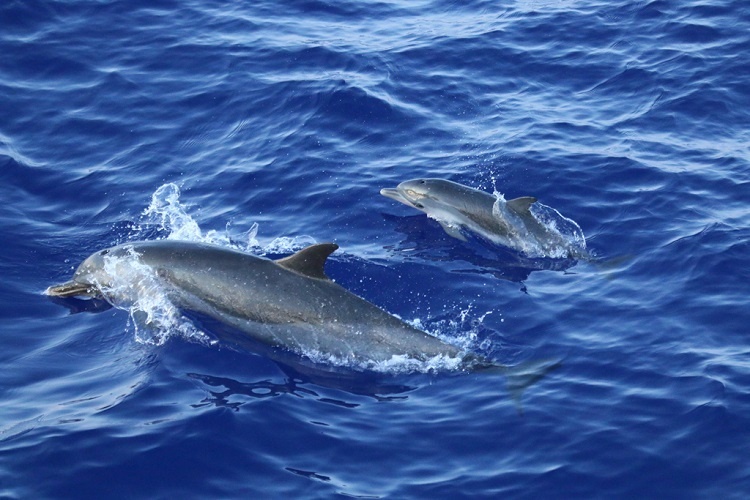 Pantropical spotted dolphins are caught as bycatch in fishing gear, leading to serious injuries and death, especially in the eastern tropical Pacific. NOAA Fisheries works with fishermen, industry, non-government organizations, and academia to find approaches and strategies for reducing bycatch in U.S. fisheries.

As human interactions with wild dolphins increase, so does the risk of disturbing or injuring these animals. The Hawaiian stock of pantropical spotted dolphins is especially vulnerable to disturbance and harassment from tourists. NOAA Fisheries provides guidance on how to safely and responsibly view dolphins, including the following initiatives:

Pantropical spotted dolphins, like other marine mammals, may become bycatch in fisheries. Some species of tuna are known to aggregate beneath schools of northeastern offshore spotted dolphin stocks in the eastern tropical Pacific Ocean. This close association led to the fishing practice of encircling a spotted dolphin school to capture the tuna concentrated below. The Dolphin Protection Consumer Information Act established a national tuna tracking program to ensure that tuna imported into the United States meets certain requirements. The program helps ensure the safety of dolphins—such as the northeastern offshore spotted stock—during tuna fishing operations.

Learn more about the Dolphin-Safe/Tuna Tracking and Verification Program

NOAA Fisheries and its partners are committed to research to help us better understand pantropical spotted dolphins and the challenges they face. 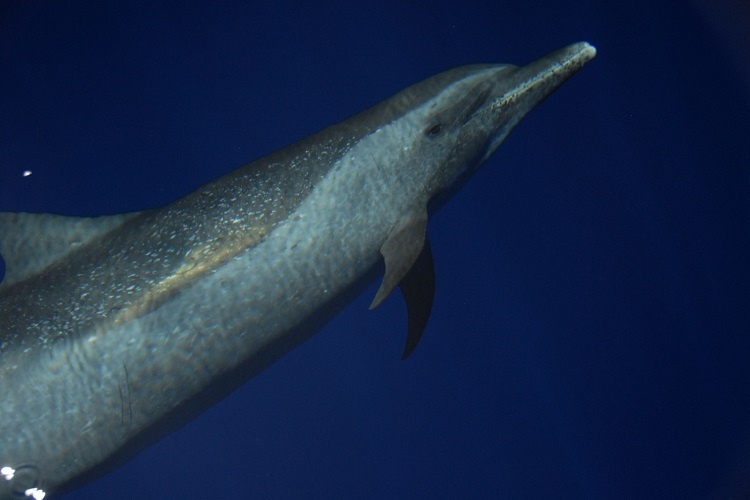 NOAA’s Southwest Fisheries Science Center (SWFSC) has conducted over 10 cetacean and ecosystem assessment surveys to collect information on pantropical spotted dolphins in the eastern tropical Pacific Ocean. The primary objective of these surveys is to investigate trends in population size of those dolphin stocks most affected by the tuna purse-seine fishery. The project takes a multidisciplinary approach. The SWFSC collects data on cetacean distribution, group size, and group composition to determine dolphin abundance. We also collect data on dolphin behavior to determine how that behavior influences our ability to detect dolphin schools and how dolphins respond to research vessels. Oceanographic data are collected to characterize habitat and its variation over time. Data on the distribution and abundance of prey, fish and squids, seabirds, and marine turtles further characterize the ecosystem in which these dolphins live. Skin biopsies provide a database for investigations of stock structure, phylogenetic relationships, and the reproductive potential of female dolphins. Acoustic recordings supplement visual survey data and provide information for ongoing studies of cetacean vocalizations.

NOAA Fisheries also implemented an observer program in the early 1970s that has collected thousands of biological samples to study eastern tropical Pacific stock structure and to quantify life history characteristics of the population. NOAA Fisheries can use information from the assessment surveys and the observer program to improve conservation and management plans for this species.