Longman's beaked whales, sometimes known as "tropical bottlenose whales" or "Indo-Pacific beaked whales," are one of the rarest and least known members of the beaked whale family. They generally live in warm, deep, pelagic waters of tropical and subtropical regions in the Indian and Pacific Oceans. Until recently, this species was only known and described from two skulls found on beaches. The first skull was found in Australia in 1882 and described by H.A. Longman—their namesake—in 1926; the second skull was discovered in Africa in 1955. In the early 2000s, genetic and morphological information were used to link these skulls with more specimens of individuals that washed ashore and at-sea sightings, thereby providing a more complete description of Longman’s beaked whales as a species.

Longman’s beaked whales are larger than most other beaked whale species and have other discernible physical characteristics that make them relatively easy to identify if spotted in the wild, such as a large pronounced melon and a distinct black band extending from behind the blowhole to the pectoral flippers. Little is known about the life history and ecology of this species. Most sightings in U.S. waters have been made offshore of the Hawaiian Islands.

Although they face threats from entanglement in fishing gear and human-caused noise, Longman’s beaked whales in the United States are not endangered or threatened. Like all marine mammals, they are protected under the Marine Mammal Protection Act.

There is little information on the abundance and population structure of this species worldwide due to the rarity of sightings at sea. An estimate of the population size for the U.S. stock in Hawaiʻi can be found in the NOAA Fisheries’ stock assessment reports. A stock is a group of animals that occupy the same area and interbreed. However, data are insufficient to estimate trends in population size of Longman’s beaked whales in Hawaii.

Longman's beaked whales have a large, robust body with a fairly large, hooked dorsal fin located behind (caudal to) the midpoint of their back. This species has dark, small, rounded, narrow flippers that fit into a depression on either side of the body. They have a well-defined forehead—or melon—that is almost perpendicular to their long, tube-shaped beak. A crease may distinguish the melon from the beak. As these whales grow older, the melon develops into a steeper, more bulbous shape that may hang over the beak. Like other beaked whales, they have V-shaped, paired throat creases.

Longman's beaked whales have a relatively small, low, bushy blow that is usually visible and slightly angled forward. They generally have a darker grayish, bronze, brown, or olive coloration that extends from their blowhole and eye down their back, as well as a facial band. The melon and a defined patch between their neck and abdomen are lighter in color, sometimes described as creamy or pale. The upper surface of the flippers is dark and the underside is light. The upper surface of the fluke is dark and the underside has a series of lighter streaks. The upper jaw of the beak is darker than the lower jaw, which has two conical teeth located at the tip. Adult males have a pair of visible, erupted teeth (difficult to see in the field, especially when the mouth is closed) and may have linear scratches and oval-shaped scars (e.g., bites from cookie-cutter sharks and lampreys) along their body.

Longman's beaked whales are usually found in tight groups averaging between ten and 20 individuals but have occasionally been seen in larger groups of up to 100 animals. Groups in the Western Indian Ocean have generally been smaller. They sometimes associate with other marine mammals such as pilot whales, spinner dolphins, and bottlenose dolphins. Dives may last from 14 to 33 minutes, and they have been observed swimming rapidly away from survey vessels while at the surface.

Their feeding behavior and prey are generally unknown, but scientists believe they are similar to other beaked whales. Beaked whales are known to dive deep to forage for their food. The analysis of stomach contents from one stranded Longman’s beaked whale implies that cephalopods (e.g., squid and octopus) comprised most of the whale's diet.

In U.S. waters, this species has been sighted in the Exclusive Economic Zone around the Hawaiian Islands and in the equatorial tropical Pacific. Strandings have occurred on the coasts of Africa (e.g., Kenya, Somalia, and South Africa), northern Australia, the Maldives, the Philippines, southern Japan, and Sri Lanka.

Little is known about the reproduction or lifespan of Longman’s beaked whales because of how infrequently they are encountered and their behavior when sighted at sea. Newborn calves have been measured at 7.7 to 9.5 feet. The specimen is the smallest reported individual of this species to date.

Longman’s beaked whales can become entangled or trapped in commercial fishing gear. They are sometimes caught as bycatch in fisheries operating in Sri Lanka.

This species may be sensitive to underwater sounds and human-made noise. Deep-diving cetaceans like beaked whales use sound to feed, communicate, and navigate in the ocean. Human-made noise, such as military sonar and seismic testing, has been implicated in mass strandings of beaked whales, including atypical events involving multiple beaked whale species. Sound pollution threatens whales by interrupting their normal behavior and driving them away from areas important to their survival.

All Longman’s beaked whales are protected under the MMPA. We protect this species by:

Our research projects have helped us better understand Longman’s beaked whales and the challenges they face. Our work includes: Like all marine mammals, the Longman’s beaked whale is protected under the Marine Mammal Protection Act. NOAA Fisheries is working to conserve this species to ensure populations remain stable. 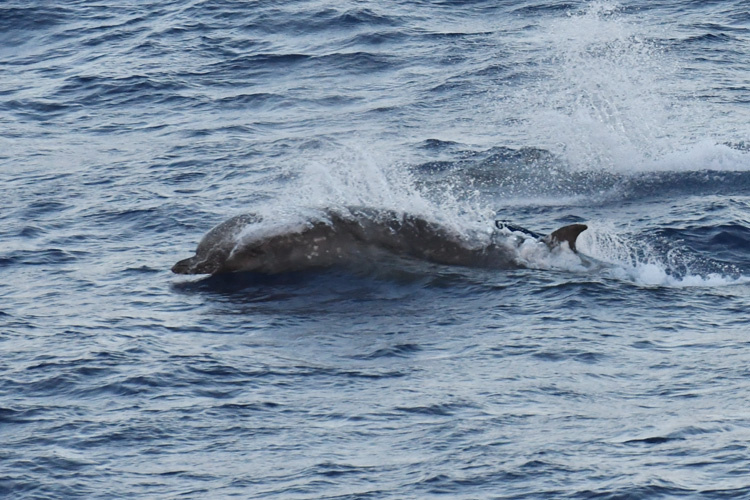 Longman’s beaked whales have been caught as bycatch in fishing gear, such as in fisheries operating in Sri Lanka, leading to deaths and serious injuries.

Increasing evidence suggests that exposure to intense underwater sound in some settings may cause some whales to strand and ultimately die. NOAA Fisheries is investigating all aspects of acoustic communication and hearing in marine animals, as well as the effects of sound on beaked whale behavior and hearing. In 2018, we revised technical guidance for assessing the effects of human-caused sound on marine mammal hearing.

Like all marine mammals, Longman’s beaked whales are protected under the MMPA.

NOAA Fisheries&nbsp;issued an incidental harassment authorization (IHA) to Lamont-Doherty Earth Observatory of Columbia University (L-DEO) to incidentally take, by Level A and/or Level B harassment, marine mammals during a Marine Geophysical Survey in the
Notice
,
Pacific Islands

NOAA Fisheries conducts various research activities on the biology, behavior, and ecology of Longman's beaked whales. The results of this research are used to inform management decisions for this species. 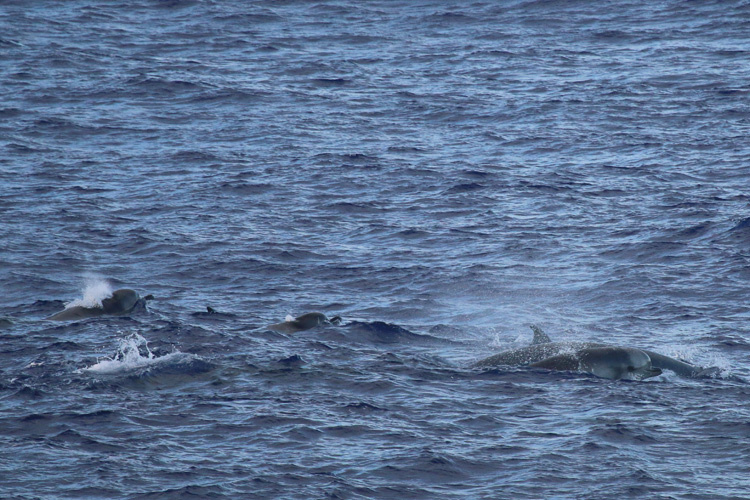 NOAA Fisheries conducts research cruises to collect information on beaked whale stocks, such as habitat preferences and feeding ecology. For example, we estimate the abundance of Longman’s beaked whales in the Hawaiian Islands Exclusive Economic Zone using oceanic research vessels to perform line-transect surveys. Information from this research can be used in management actions to protect these animals.

Our research is also focused on acoustics—the physics of the properties of sound. We study the basic acoustic behavior of cetaceans and fish, mapping the acoustic environment and finding better ways to find cetaceans using acoustic technologies. Our acoustic research also assesses the degree to which human-caused activities are changing the underwater soundscape, how these changes may potentially impact marine animals in their acoustic habitat, and what measures can be taken to mitigate these potential impacts.