Shell disease is an epizootic, or temporarily prevalent and widespread, disease found on lobsters. While out here on the Bigelow at the southern edge of the Northeast Channel, we’ve caught some lobsters, and just in time. Sailing with us is Joe Kunkel, a former professor and now professor emeritus at UMass Amherst, who is investigating a shell disease found on some lobsters.

Shell disease is an epizootic, or temporarily prevalent and widespread, disease found on lobsters.  Unofficially, it’s suggested to be caused by a bacterium called Aquamarina.  It’s denoted by circular lesions on the top part of the carapace.  The lesions start out microscopic, but once visible, hundreds of organisms, such as other bacteria, protozoans and nematodes, can be found living in the infected area.  During the 1980s, about 1 in 10,000 lobsters may have been seen with shell disease.  By the late 1990s, hot spots with up to 70% of the population showing signs of lesions were seen in the Narragansett and Buzzards Bay areas.

Joe suggests that the prevalence of the disease increases as the lobsters’ vulnerability to it increases.  This means the shell’s protective ability plays an important role.  Minerals composing the shell include calcium, phosphate and magnesium.  The chemical reactions between these minerals dissolving in the surrounding sea water create a basic (high pH), ‘unstirred layer’.  Think of it as a barrier between the lobster and seawater where a lot of mineral mixing is happening.  Have you ever noticed that a lobster feels a little slippery?  The slippery feeling is that protective barrier.

In order to grow, lobsters molt their hard, exterior shell.  Leading up to molting, a reserve of calcium carbonate and minerals in the endocuticle, or inner shell layer, are reabsorbed through the epidermal cell layer.  A new, soft shell matrix is formed underneath the old shell.  Once molted, they eat their old shell, bringing all the rest of the minerals back into their body.  They use the reabsorbed and eaten minerals to establish their new shell.  It takes about seven days for the shell to feel hard, and it’ll be several more weeks until the shell reaches its maximum hardness.  But their new shell has to be bigger so they also need to consume more minerals from their diet.  This time of shell establishment is the vulnerable phase when shell disease may sneak in. 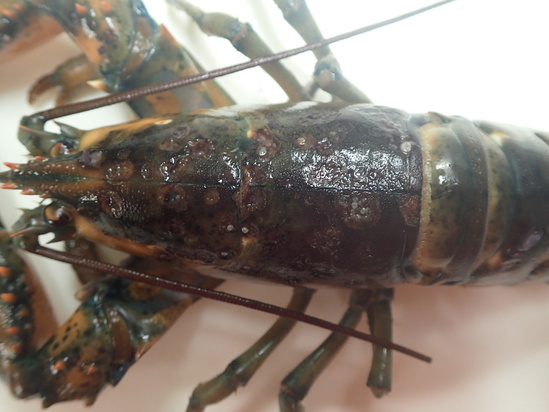 Lobster with extensive shell disease on its carapace.

If a lobster isn’t able to consume enough added minerals, the new shell could be thinner or weaker in some areas.  As global warming changes the temperature and chemistry of the ocean, lobsters may find it increasingly difficult to obtain the necessary amount of minerals, added to what they already have stored, and regrow a shell to its maximum thickness and hardness as well as building reserves for its yet bigger shell next year.  Possibly, those areas of mineral thinness, or shell weakness, are spots of vulnerability to shell disease.  If the protective barrier isn’t as effective, the lobsters are rendered more vulnerable, giving the bacteria a chance to establish a lesion.

The mineralization is a process that spans multiple years, and the lobsters need an adequate mineral supply to achieve a healthy cuticle that is not vulnerable to infection.  We are making it harder for the lobsters by feeding them low-calcium bait.  We could possibly have a healthier lobster population in the face of ocean acidification if we feed them a higher calcium carbonate bait.  – Joe Kunkel 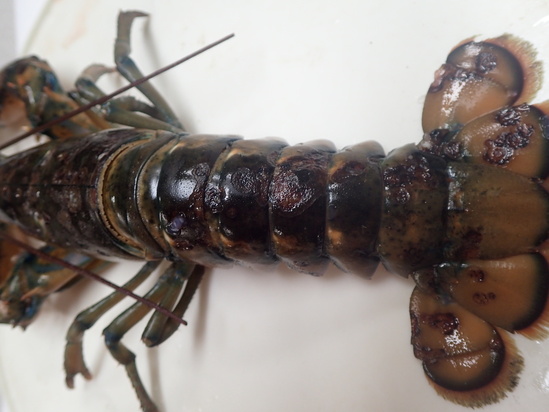 But if a lobster has shell disease, not all is lost!  If they are able to shed their shell, the disease goes with it, and they are safe.  Unfortunately, it’s not that simple.  First, younger lobsters benefit from multiple molts a year as they are growing very fast.  They are rarely killed because shell disease does not have the time to develop to advanced stages.  For older lobsters, molting is reduced to once a year in the summer.  This means that if the lobster is vulnerable to shell disease due to a compromised shell, it may develop lesions at some point during the year.  As a result, the most severe cases are expected right before molting.  As long as the infection hasn’t made its way through the epidermal cell layer, the lobster has a chance to molt the shell and have a new beginning, disease free with a new shell.  Otherwise, the infection enters the blood stream and kills the lobster.

Females have an added hurdle to overcome because they don’t molt while carrying eggs.  Molting for these females may be delayed for up to six months!  This means any lesions on the shell have six more months to reach the blood stream.  Large, healthy and reproductively successful females are extremely important for sustaining a population, so it’s disconcerting to see this condition having an exaggerated effect on females.

But where there are problems, there are people seeking solutions.  One idea is to supplement their diets by feeding lobsters in their traps with bait that contains more minerals needed for shell growth.  Another idea is to harvest them sooner after they molt.  This may decrease the amount of lobsters caught with shell disease as it hasn’t had time to establish itself.  Lobsters with shell disease are usually either discarded or if abundant they are sent to the cannery.  Since the lesions are only on the cuticle, the meat is perfectly fine.   Lobsters with shell disease are not desirable for boiling in the shell because the lovely cherry red color is replaced with a rusted-metal look.