About a quarter of the carbon dioxide released into the atmosphere by burning fossil fuels is absorbed into the ocean. There it causes a chemical change resulting in ocean acidification. This chemical change has the potential to profoundly alter marine ecosystems as some species have lower survival, decreased growth, or disrupted behavior when reared in high CO2 water.

Marine waters along the Pacific Northwest coast are naturally more acidic than other regions, making this area more vulnerable to acidification. As a result, many species of regional economic importance, such as oysters and crabs, and primary producers such as phytoplankton, are likely to experience direct effects from ocean acidification. In addition, change in the abundance or distribution of species directly vulnerable to ocean acidification will have ripple effects throughout the food web, creating greater impacts on harvested and protected marine resources.

Ocean acidification poses an economic threat to the health and prosperity of the $100 million a year West Coast shellfish industry. Calcifying species (those animals that make calcium carbonate shells) are particularly vulnerable to acidification. Acidification can cause additional indirect losses to the finfish industry because of declines in fish prey species, like krill.

We seek to understand which species are affected by increased carbon dioxide and why. We rear locally collected animals in our “ocean time machine”  - aquaria that mimic the seawater carbon dioxide concentrations of the past, present, and future. Our experiments focus on species of particular economic or ecological importance.

For example, current projects focus on Dungeness crab, the most valuable fishery on the West Coast, and Pacific krill, a critical link in the West Coast food web supporting salmon and other harvested species. Previous work at the lab has shown that both of these species do poorly in high carbon dioxide conditions, leading to concern about future impacts as carbon dioxide levels continue to rise.

We use ecosystem models to identify how changes in parts of the food web most vulnerable to ocean acidification will affect the entire regional food web. Our research looks at how changes in prey species will affect harvested fish, threatened species, and other valuable marine resources.

We collaborate with other researchers in the region to make precise measurements of ocean acidity. Then we sample shellfish, zooplankton, and finfish to understand the relationship between carbon dioxide and these key species. Current projects look at the distribution of Dungeness crab larvae in Puget Sound and the relationship between near-shore chemistry and oyster survival.

We work with other organizations to raise public awareness of ocean acidification. We develop community outreach through public lectures, tours, and exhibits. We have also helped develop hands-on educational resources. 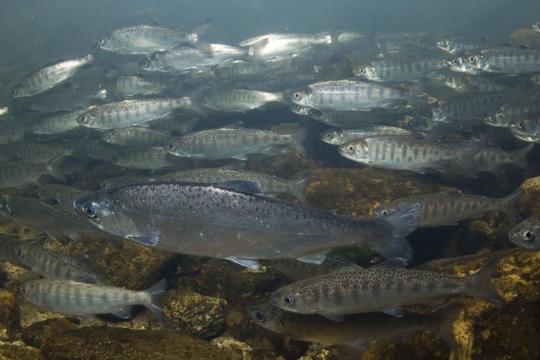