Green sturgeon are an anadromous fish, which means they can live in both fresh and saltwater. They have a relatively complex life history that includes spawning and juvenile rearing in rivers followed by migrating to saltwater to feed, grow, and mature before returning to freshwater to spawn. They are a long-lived, slow-growing fish. They are vulnerable to many stressors and threats including blocked access to spawning grounds and habitat degradation caused by dams and culverts. The southern distinct population segment is listed as threatened under the Endangered Species Act.

NOAA Fisheries is committed to conserving and protecting green sturgeon. Our scientists and partners use a variety of innovative techniques to study, learn more about, and protect this species.

Sturgeons are most closely related to paddlefish, reedfish, and numerous fossil groups within the infraclass Chondostei. These are primary cartilaginous fish with some degree of bony structures (ossification). They are not ancestral to modern bony fishes but represent a highly specialized and successful offshoot of ancestral Chondosteans. Their skeletons are composed of cartilage, and they have a series of external bony plates called scutes along their backs and sides.

Sturgeon are often likened to sharks because of the many features they share, including:

Sturgeon do not have teeth. Instead, they use their long, flexible "lips" (i.e., protrusible jaw) to suck up food from the bottom. 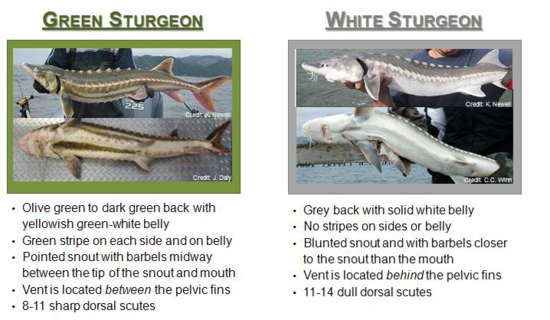 Green sturgeon reach maturity around age 15 and can live to be 70 years old. Unlike salmon, they may spawn several times during their long lives, returning to their natal rivers every 3–5 years. By comparing the DNA and movement patterns of tagged fish, researchers identified two genetically distinct population segments of green sturgeon. Although these fish may look identical, their genetic makeup is very different. This distinction allows NOAA Fisheries and other agencies to manage populations more effectively and helps preserve diversity.

During spawning runs, adult sDPS fish enter San Francisco Bay between mid-February and early May and migrate rapidly up the Sacramento River. Spawning occurs in cool sections of the upper Sacramento River where there are deep, turbulent flows and clean, hard substrate. In the autumn, these post-spawn adults move back down the river and re-enter the ocean. After hatching, larvae and juveniles migrate downstream toward the Sacramento-San Joaquin Delta and estuary. After rearing in the delta and estuary for a few years, they move out to the ocean. As adults, both population segments of green sturgeon migrate seasonally along the West Coast. They congregate in bays and estuaries in Washington, Oregon, and California during the summer and fall months. During winter and spring months they congregate off of the northern Vancouver Island in British Columbia, Canada. 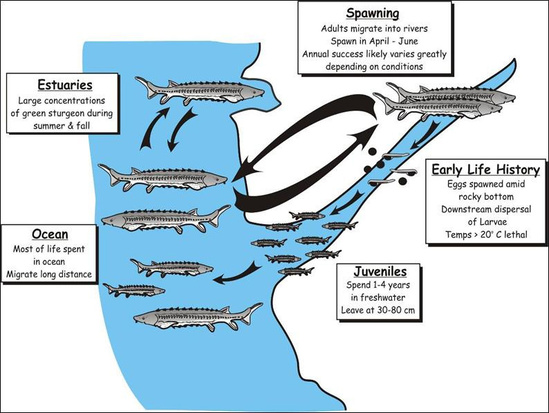 Green sturgeon populations successfully persisted throughout North America for 200 million years. They are thought to have experienced a precipitous decline during the past century. Harvest of adults likely resulted in direct declines in abundance and destruction of spawning and rearing habitats led to reduced population sizes and resilience. There are now regulations prohibiting harvest or take in effect. The most significant threats to green sturgeon likely relate to loss and inaccessibility of available spawning habitat. Much of this is driven by competing water resource needs between humans and fish.

Dams, altered flows, and entrapment in water diversions can impede or inhibit their migration. Other threats to the survival and recovery of this ancient fish include:

Regulations prohibit the retention of green sturgeon in both recreation and commercial fisheries throughout California, Oregon, Washington, and British Columbia. These regulations represent a significant reduction in the risk of loss of green sturgeon to fishing activities and are expected to have a substantial conservation impact.

In freshwater, the designated critical habitats are:

In marine waters, the designated critical habitats are:

In coastal bays and estuaries, the designated critical habitats are:

We, NOAA Fisheries, are announcing 5-year reviews of four species listed under the Endangered Species Act (ESA) of 1973, as amended. The four distinct population segments (DPSs) included in this notice are the southern DPS of eulachon (Thaleichthys…
Information Gathering
,
West Coast

NOAA Fisheries and our many partners are currently continuing numerous studies of the distribution, migrations, spawning habitat utilization, and population genetics of green sturgeon both in collaborative and independent efforts. These partners include:

The Southern Distinct Population Segment of green sturgeon is listed as threatened under the Endangered Species Act. These fish are sometimes caught accidentally in fisheries along the West Coast, including the California halibut bottom trawl fishery. This is known as bycatch. The impact to the species is difficult to understand given the lack of information on the effects of catch and release on green sturgeon in these fisheries.

The objective of this recovery plan is to increase sDPS green sturgeon abundance, distribution,…