Team Laysan had an exciting first few days at camp. Not only did we set up a field station and complete training, but we had two chunky seal patients to look after! Before settling in at Laysan, we outfitted the seals with scientific instruments to monitor their movements upon release. Ke Kai Ola patients Maiapilo (WK04) and ʻĀkulikuli (WK40) were set up in a fenced pen near camp. We held the seals in the pen in order to get them re-acclimated to Laysan, and to monitor their health and behavior. After 3 days of hourly checks and twice-daily feedings, it was time to release Maia and Akuli!

The humans on-island were thrilled for the release, and Maiapilo and ʻĀkulikuli appeared ready to go as well. Normally wary of us, they pressed up against the fence as we prepared to open the gate. After some finagling of fencing, we opened the gate, and both seals speedily burst forth (as much as two fat seals can speedily burst on land)! Maia led the way to the water, with Akuli hot on her hind-flippers. Both seals spent a few moments splashing in the shore break, and then were off to explore the reef. While seeming to take comfort in each other’s company in captivity, Maia especially seemed eager to strike off on her own. We watched the seals for some time as they swam near the shore, and it was easy to imagine them happy to be stretching their swimming muscles in their home surf.

Our main task on Laysan is to walk the sandy beaches and record individual seals we see. Since both of our rehabbed seals have instruments on their backs with antennae and tags on their hind-flippers, they are easy to spot. On average, we see both seals (usually snoozing) every 2–3 days. We are always excited to see them and track their progress around the island. They both have been looking nice and healthy, and it has been interesting to compare their size to other 1-year-olds on the island. We continue to be shocked and amused at how much larger Maia is compared to other seals her age—she clearly took advantage of feeding time at KKO!

As the data from the scientific instruments is processed back in Honolulu, researchers will know exactly where these two seals are going. While it is great to see them safe on land, a better measure of their future success is time spent foraging and learning to hunt as wild seals. Good luck, Maia and Akuli! 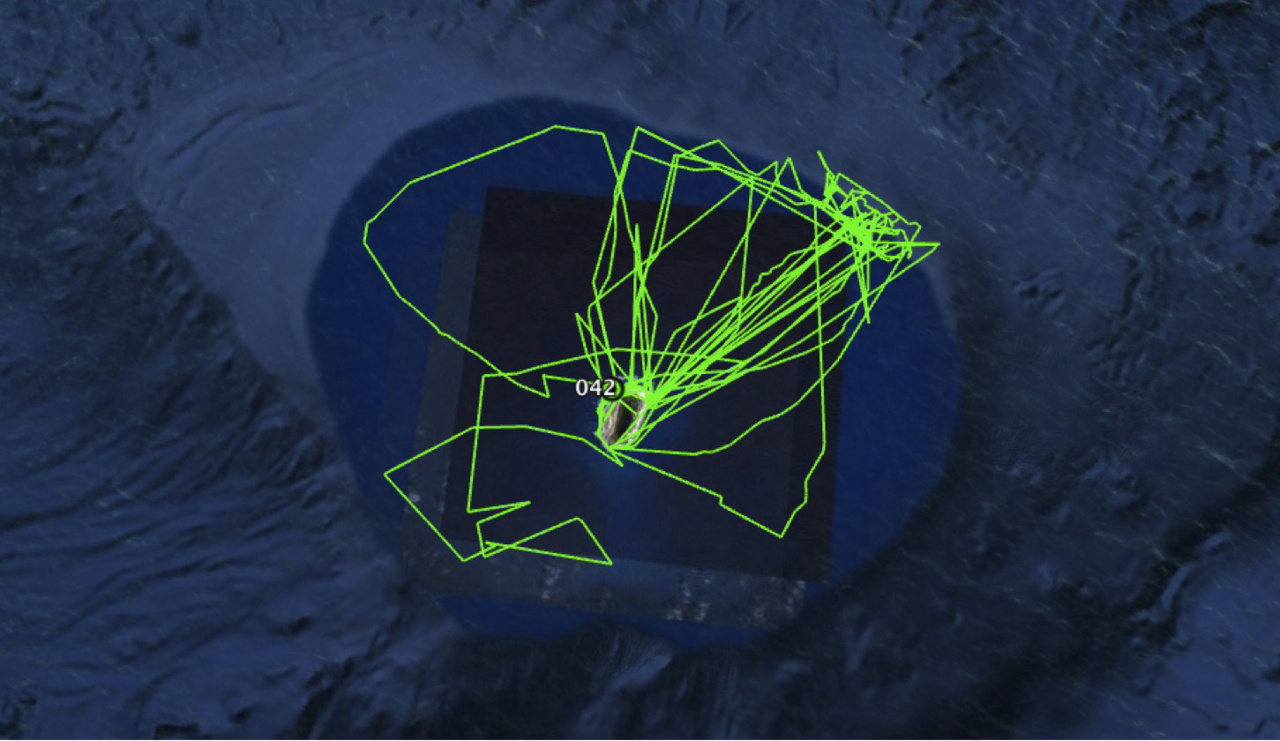 GPS tracks show WK04 (Maiapilo) exploring widely around the lagoon surrounding Laysan Island.  Her favored foraging spot shows up as a cluster of lines northeast of the island. These tracks show all movements from the release date through July 6th.

Update, July 8:  We continue to see Maiapilo and ʻĀkulikuli every 3–4 days around the island, and while both have slimmed down to look more like normal seals, they still dwarf their fellow yearlings. ʻĀkulikuli started molting this week and unfortunately no longer has his instrument. Maiapilo was also observed this week with only one antenna coming from her 2 instruments. However, both look great and we are happy to see them with so much regularity. 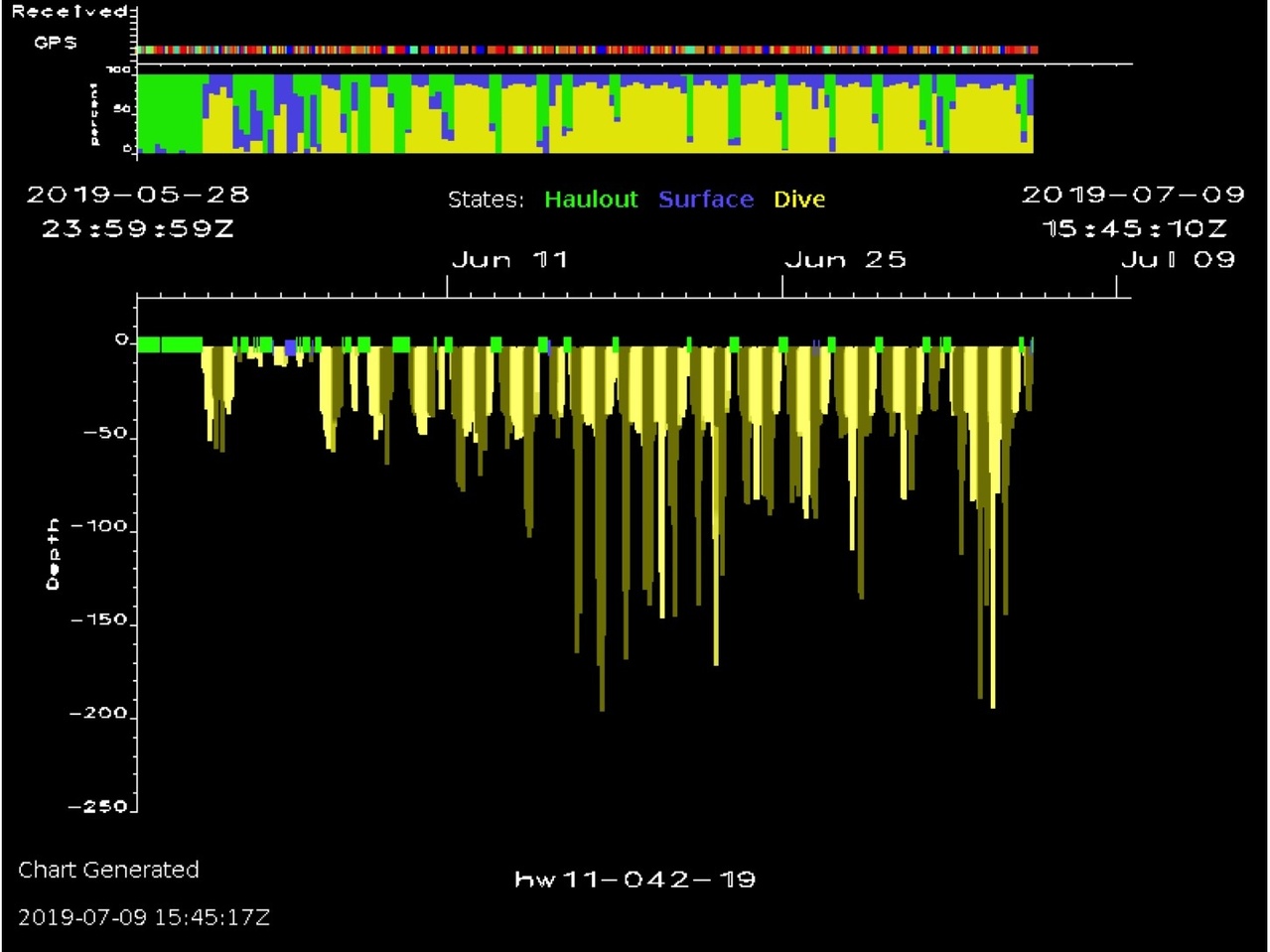 This graph shows the dive pattern for WK04 (Maiapilo) from her release date through July 6th. The pattern of dives (long yellow lines) and haul outs (short green lines) shows trips with deep diving and regular returns to land to haul out and rest. 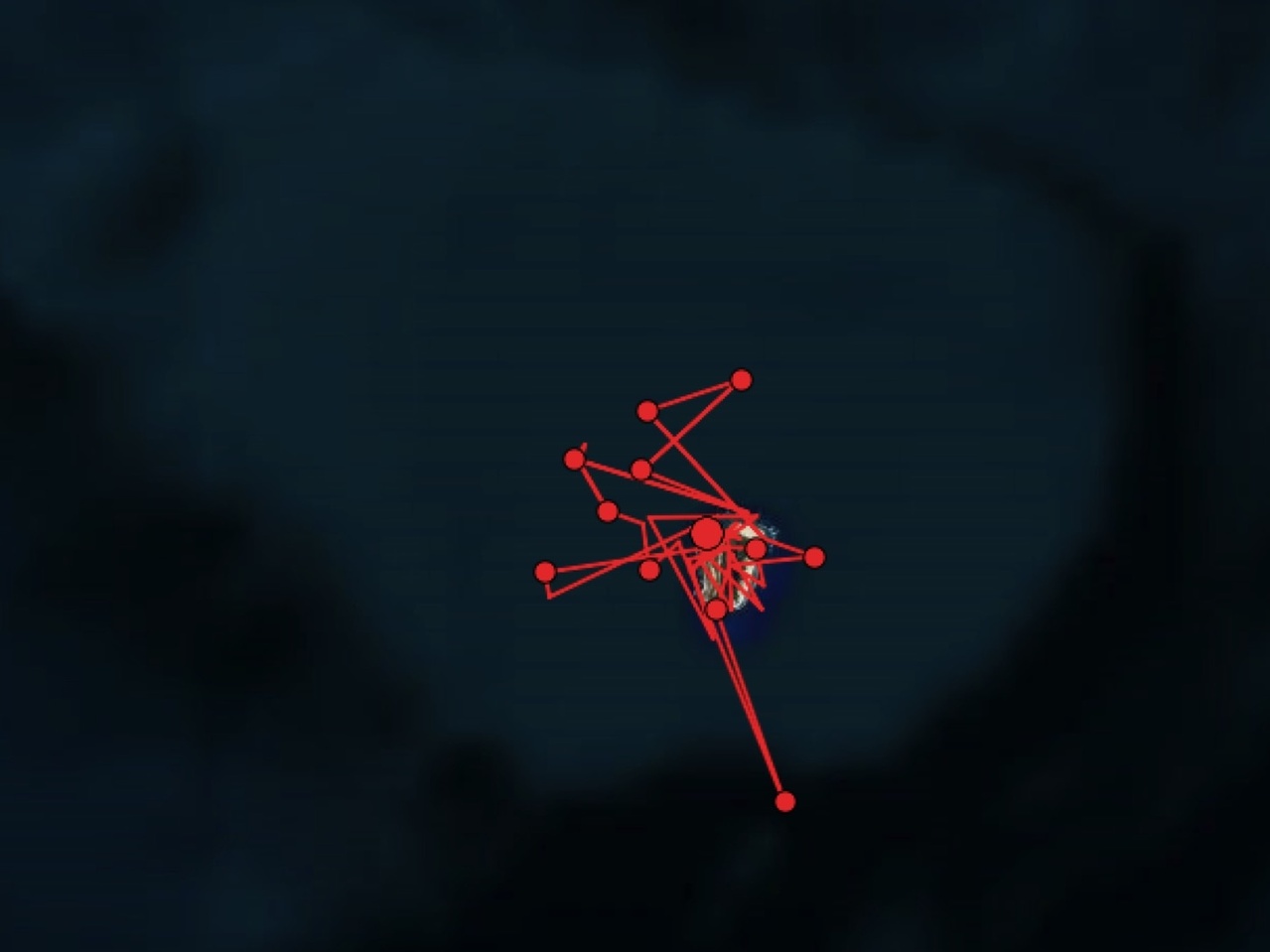 Argos satellite tracks show the movements of WK40 (ʻĀkulikuli) for June 30th-July 6th . He tends to use foraging locations closer to Laysan Island. On July 6th, the Laysan biologist team reported that ʻĀkulikuli had molted, thus shedding his satellite tag.

Previous: Notes from Nihoa Next: I Found a Message in a Bottle Marjorie Cox lives in northern California, where she likes to spend time with elephant seals. She is super excited to experience a new ecosystem in Hawaii, and get to know the Hawaiian monk seal!