The main focus of the Aerial Surveys of Arctic Marine Mammals (ASAMM) project may be bowhead whales, but the “MM” (Marine Mammal) part of the project name is also taken very seriously. This season is a good example of why we record sightings of all marine mammals and compare them to previous years.  Bears, bears, and more bears!  More specifically, polar bears!

July 2019 tallied more polar bear sightings than any previous July since ASAMM Beaufort Sea summer surveys began back in 2012. Previously, seven bears was ASAMM’s record for the most bears seen in July on sea ice or land or in open water, for the western Beaufort and eastern Chukchi seas combined.

This July we had 38 polar bears! Thirty. Eight. 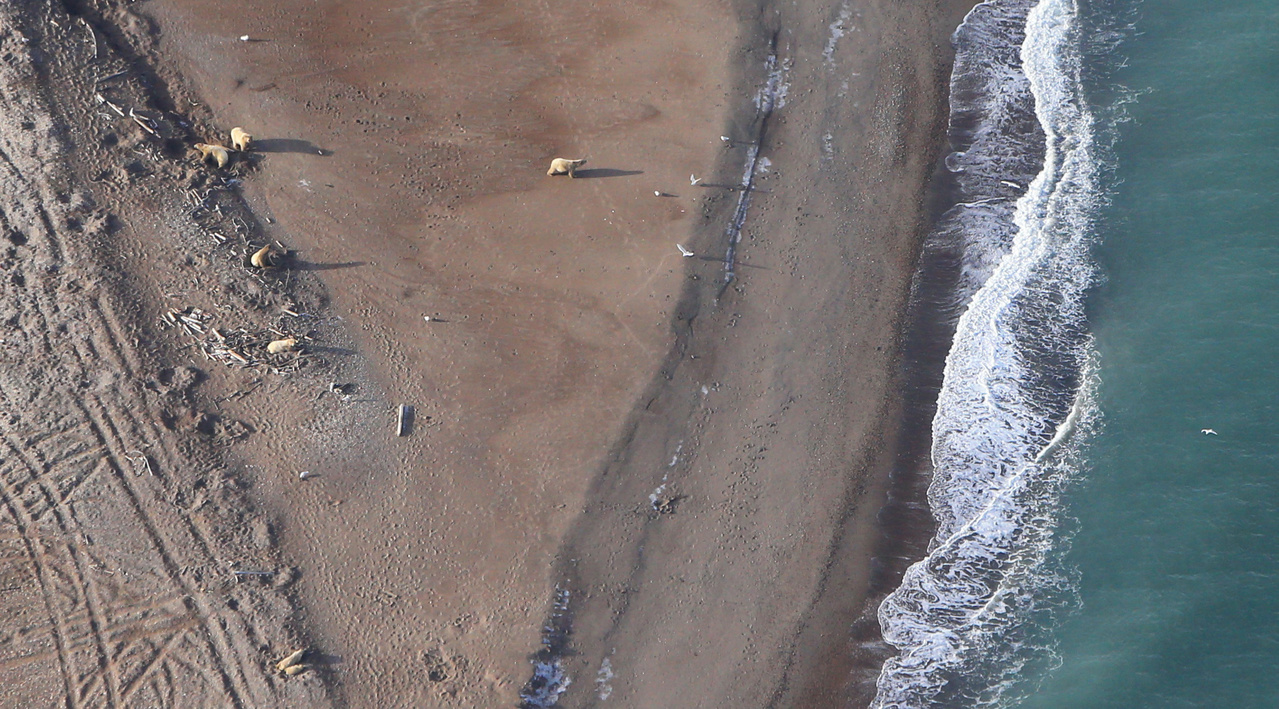 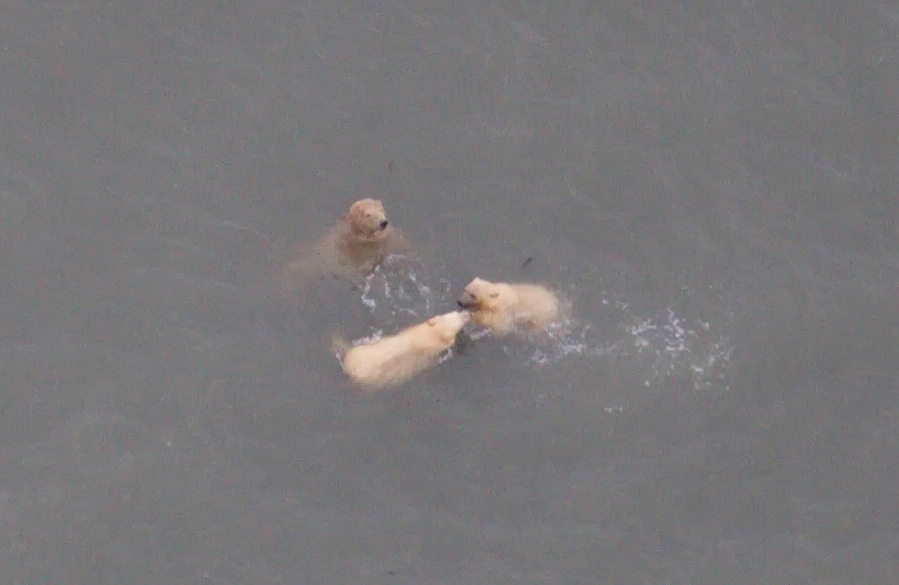 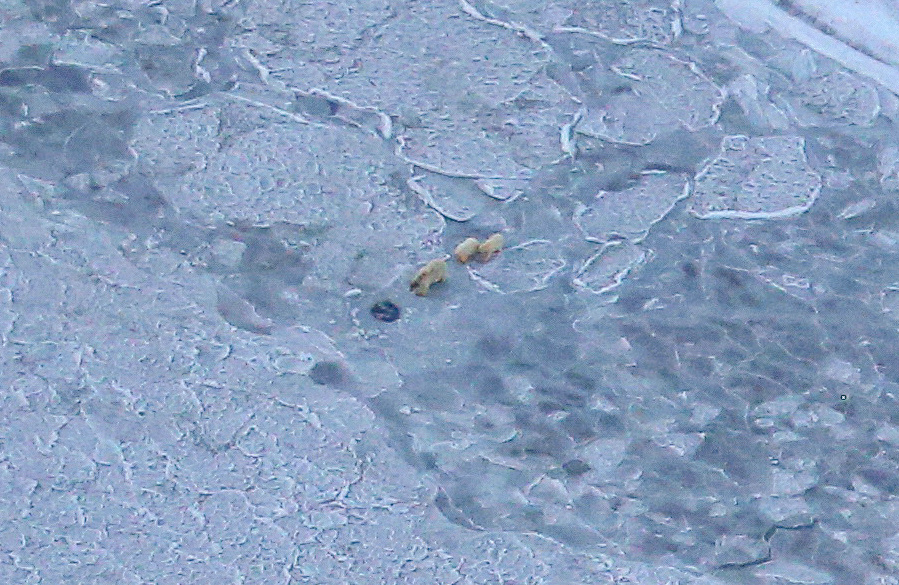 We found bears resting, sleeping, eating, and walking; on ice, tundra, islands, and along shorelines; and swimming miles from shore.  Polar bears doing what polar bears do – their best to make a living in the Arctic.

While it may seem like a good thing to see so many bears, we cannot assume that increased sightings equals an increasing population. In fact, it may be quite the contrary.
Historically, polar bears in the Beaufort Sea spent their entire year on sea ice, except for females that spent winter in dens on the coastal plain. Recently, an increasing number of polar bears are coming ashore in the western Beaufort Sea and they are arriving earlier, leaving later, and staying for longer periods overall.

From 2012 to 2018 during the month of July, ASAMM recorded only three polar bears on shore. Those three bears were seen in 2017, a year when sea ice retreated earlier in the season than most other years. In July 2019, 31 of the 38 bears recorded were seen on shore. 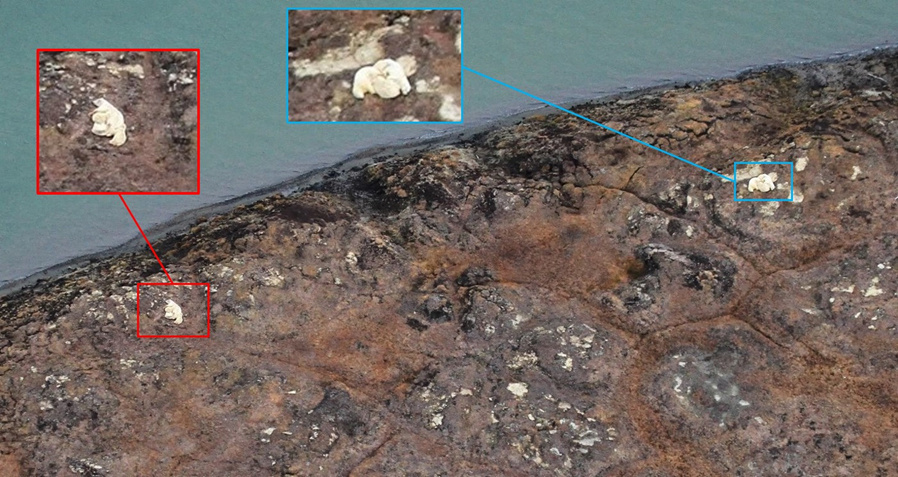 Two mother polar bears rest on the tundra above the beach, one with three cubs (left) and one with two cubs (right).

This is happening because of sea ice decline.  Arctic sea ice in 2019 tied with 2007 and 2016 for the second lowest sea ice extent since modern recordkeeping began in the late 1970s. A marked decline in sea ice coverage and an increased period of ice absence in the southern Beaufort Sea in September has been documented over the last 15 years. 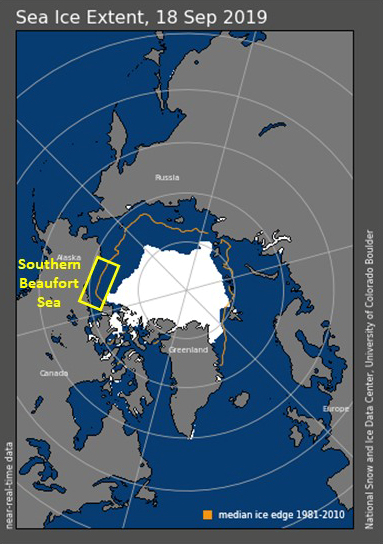 Polar bear density is greater over the continental shelf (<200 m depth) than in deeper waters.  This is because polar bears’ primary prey, ice seals (including ringed, spotted, and bearded seals), are found over the shelf. When sea ice retreats north beyond the continental shelf in summer, there are fewer ice seals associated with that ice. Polar bears must choose between staying with sea ice far offshore or relocating to shore.  ASAMM data suggest that more bears now are opting to spend time on shore in search of food.

Loss of sea ice habitat has been associated not only with increased time on land for polar bears, but with significant changes in food sources and declines in body condition, successful reproduction, survival, and abundance. ‘Coastal’ polar bears that spend more time ashore during periods of reduced sea ice appear to be changing their diets from mostly seals to scavenged whale carcasses. But as more and more bears come ashore, whale carcasses will likely not be enough to sustain the population. 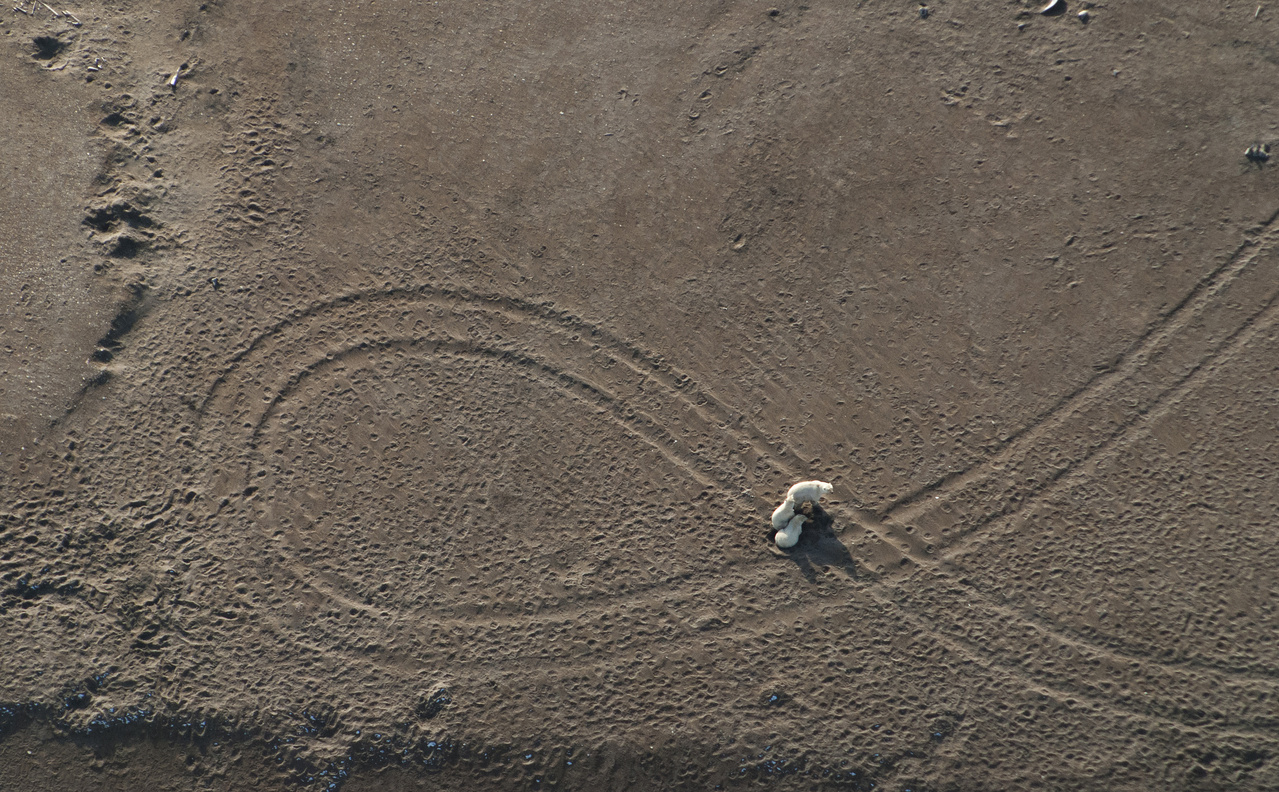 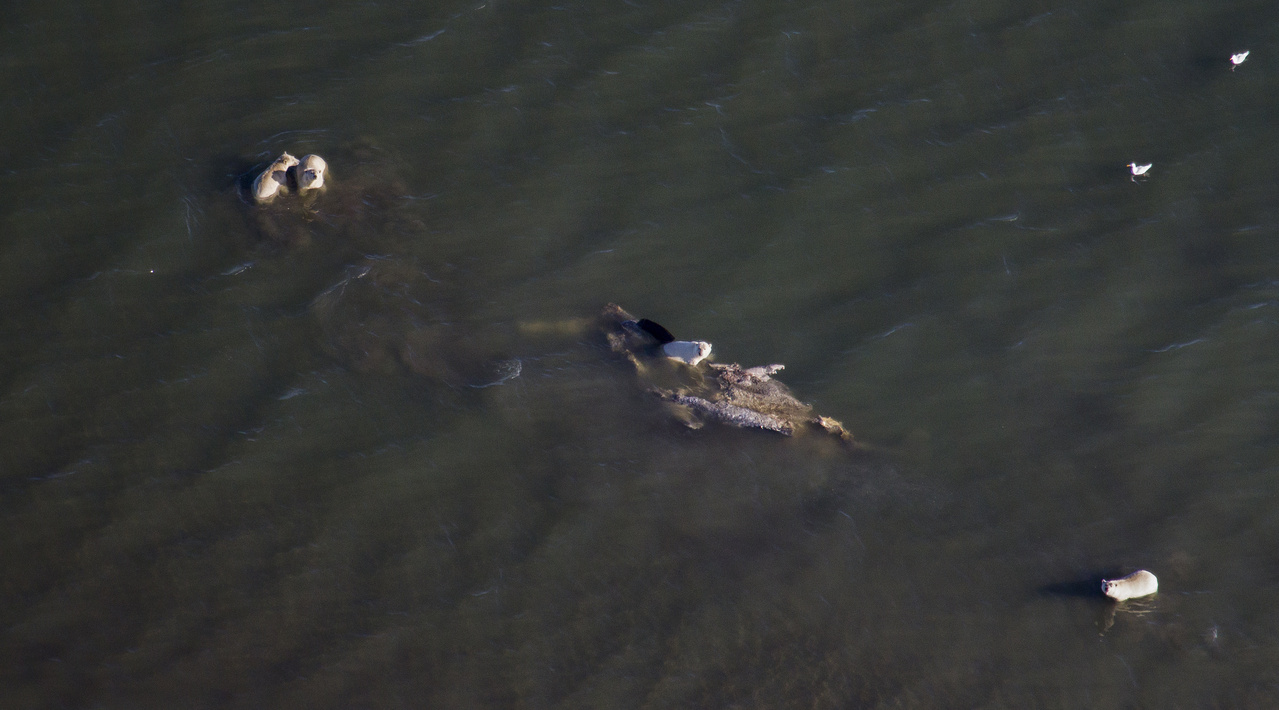 Each year, polar bears congregate on Cross Island and Barter Island, two small islands on the western Beaufort coast where Inupiat hunters leave the remains of bowhead whales taken each year during the fall subsistence hunt. The fall hunt in this region usually ends by mid-September, and aggregations of bears typically appear on the islands around that time. Prior to 2019, the earliest ASAMM has recorded large aggregations of polar bears was August 15, in 2016 (13 bears).  In 2019, ASAMM documented 20 polar bears on Cross Island by late July. 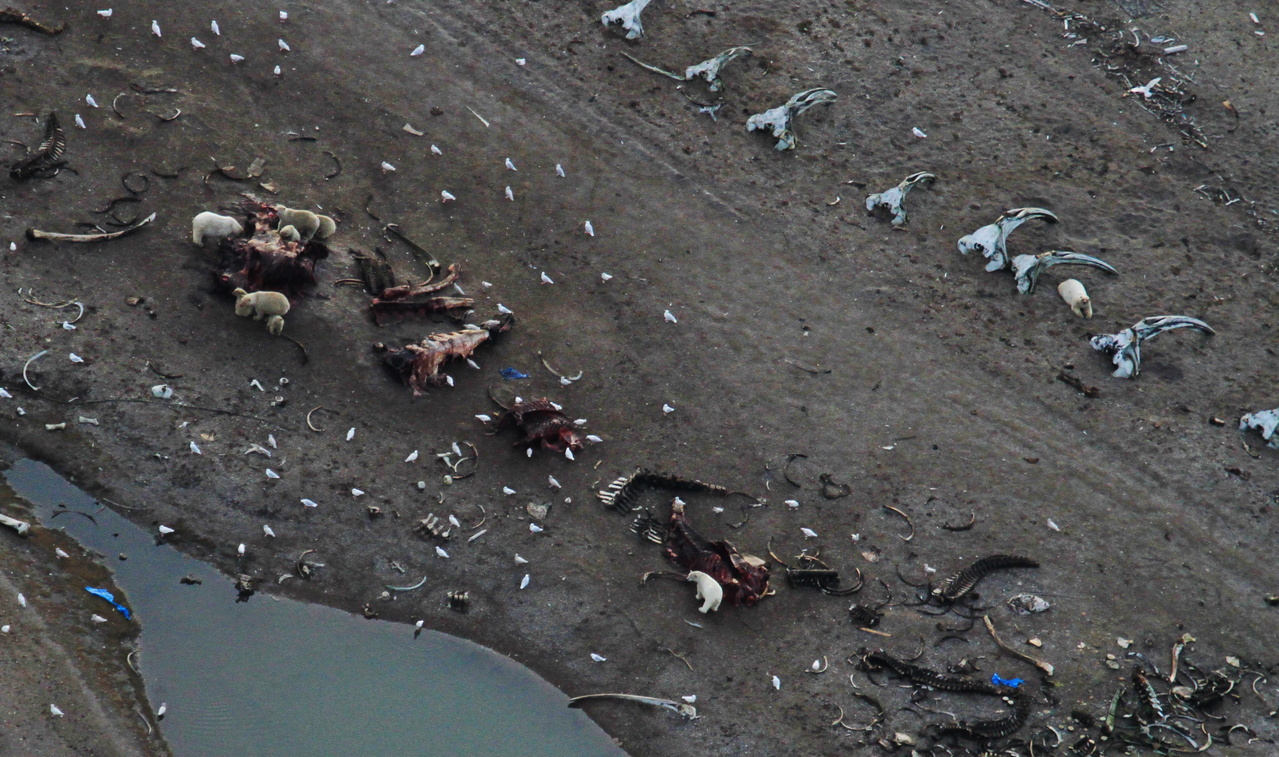 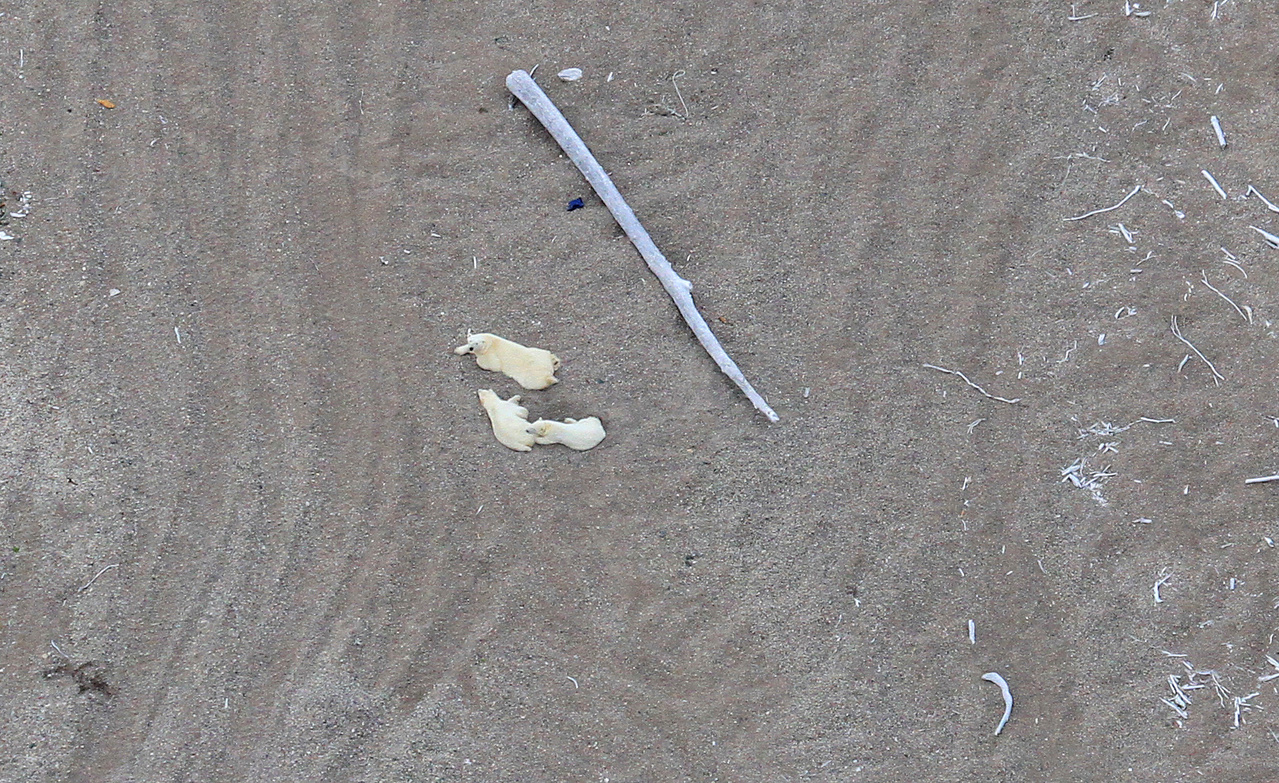 Throughout the remainder of the 2019 field season, ASAMM continued to see high numbers of polar bears along the western Beaufort Sea coast on several occasions.  On October 23, ASAMM documented 32 polar bears - mostly mothers with cubs - on Cross Island. Vicki Beaver has been an independent aerial marine mammal observer with the ASAMM team since the 2011 spring bowhead whale census. She has worked with marine mammals since 1992 as a field biologist, photographer and educator, studying whales from vessels and shore.

This aerial survey of whales, seals, and other marine mammals in the U.S. Arctic has been ongoing since 1979 with support from the Bureau of Ocean Energy Management. It provides a invaluable resource for detecting marine mammal movements and distribution in this remote region. 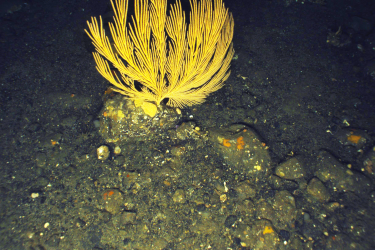 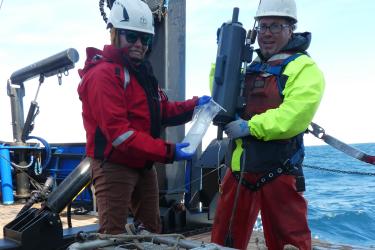 Meredith Pochardt (left) and Sean Rooney (right) collecting water samples from a Niskin bottle. The bottles are attached on the cable above the drop camera and can be triggered to capture water at targeted depths and locations to look for eDNA. Image courtesy of Sean Rooney, NOAA
Science Blog 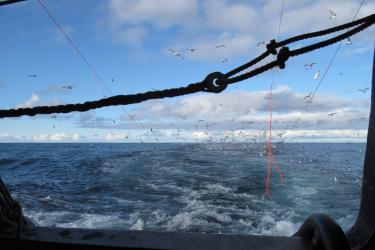