Each year we conduct aerial surveys of the northern and western coasts of Alaska, in the Beaufort and Chukchi seas.

In 2019, a large part of the Aerial Survey of Arctic Marine Mammals (ASAMM) project’s research is to estimate the number of bowhead whales from the Bering-Chukchi-Beaufort stock in the Arctic. That’s a difficult thing to do since we can only count whales at or near the surface. Our new study is to follow and observe a small group of whales (2-5 animals, as well as mother/calf pairs) for as long as possible to better understand their behavior. With enough data, we will be able to estimate the proportion of the total whales in the study area that are visible to the team as we fly by. For example, we may find that a small group of whales spends 10 minutes diving and 2 minutes breathing. So,we only can see them 2 out of a total of 12 minutes, or 17% of the time. Data already exist for individual bowhead whales that have been tracked with satellite tags and by aerial observers on other projects. That’s why we are focusing our efforts on groups of whales.

Our first two bowhead whale sightings were single adults swimming west.  Admittedly, I was very excited because I didn’t expect to see any bowheads as most of the population is normally farther east in Canadian waters at this time of year. 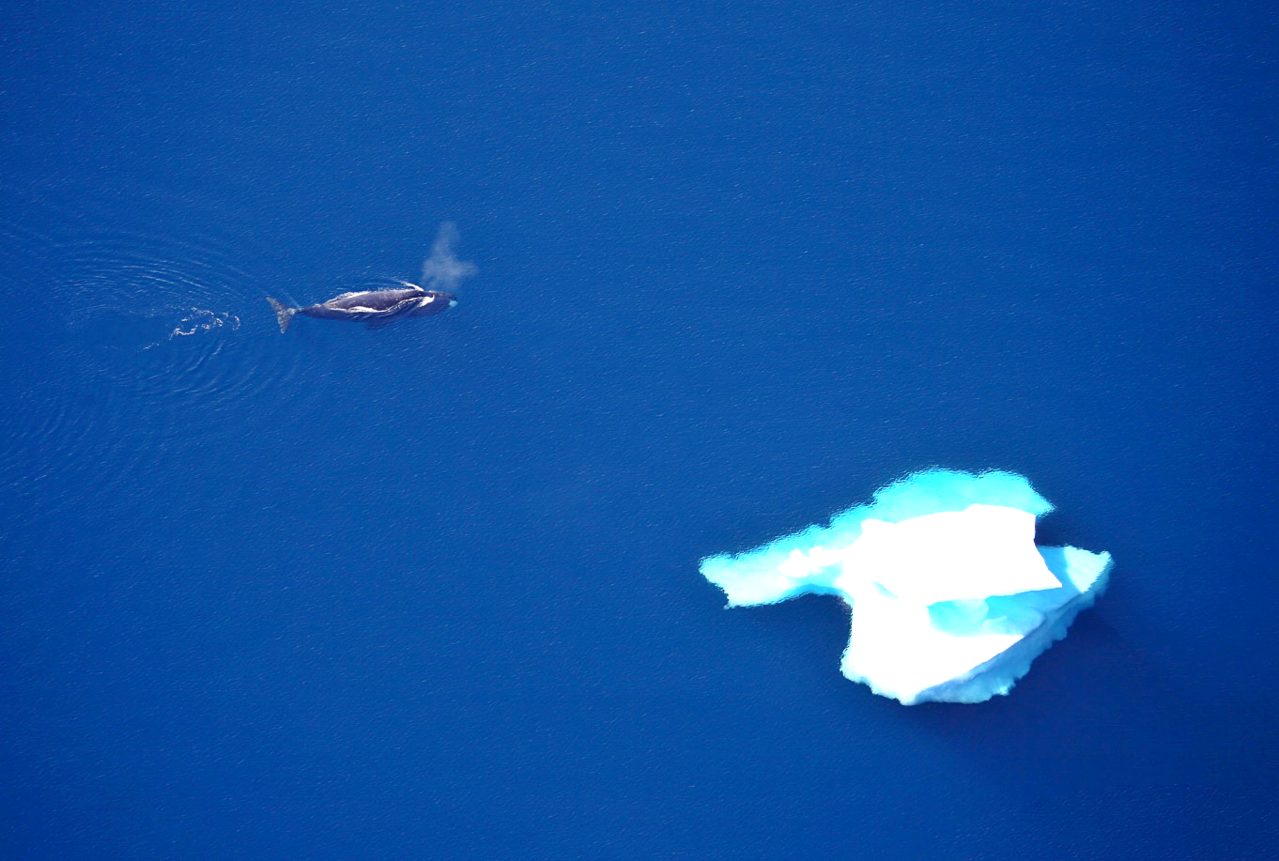 Bowhead whale as seen from the air.

As we continued offshore, I noticed ripples on the water at a distance – too far to distinguish what caused the disturbance. This held my attention until I spotted a whale blow. We broke from our survey trackline to investigate. It turned out to be three adult bowheads – a perfect group size for a focal group follow (FGF) session. 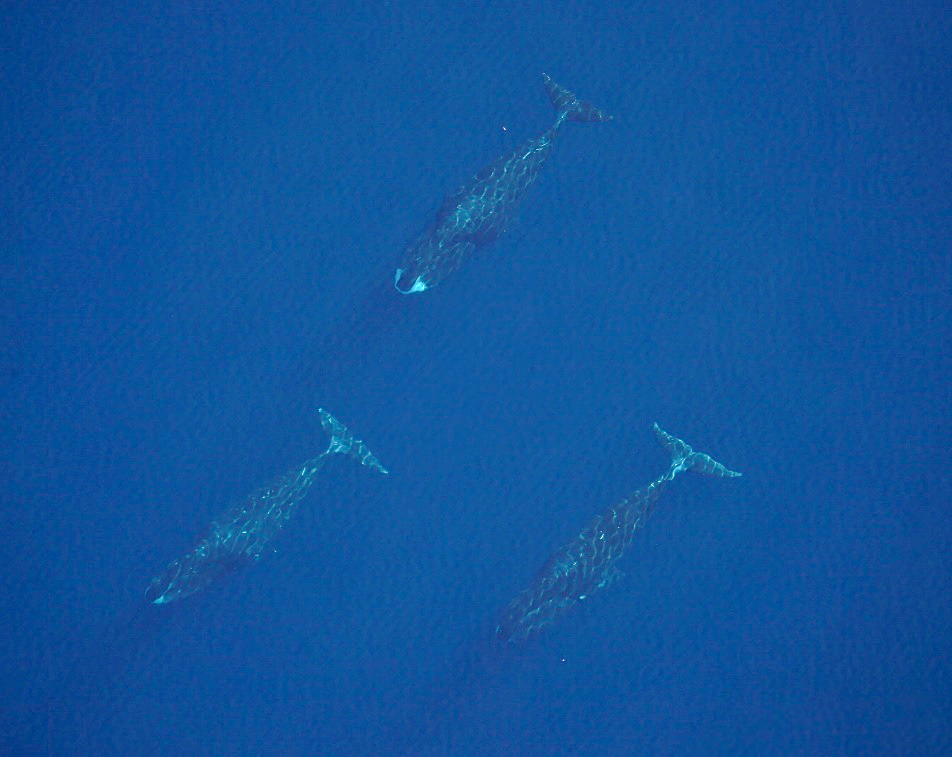 The whales appeared to be resting – swimming slowly on autopilot. Initially they were in close formation in open water. With ideal environmental conditions and clear blue water, we jumped on the opportunity to whale watch and learn! Normally we catch only very short glimpses of whales, just enough time to confirm species, estimate groups size, and detect a calf. So, you can imagine how special it is for us to spend hours with the same group.

We used the whale’s spatial orientation to quickly nickname them Lefty, Malcolm (in the middle), and Righty. Upon circling, it became easy to differentiate each whale from another by the white chins, scars, and peduncle/fluke coloration –  unique characteristics used by researchers to identify individuals over a whale’s lifetime. 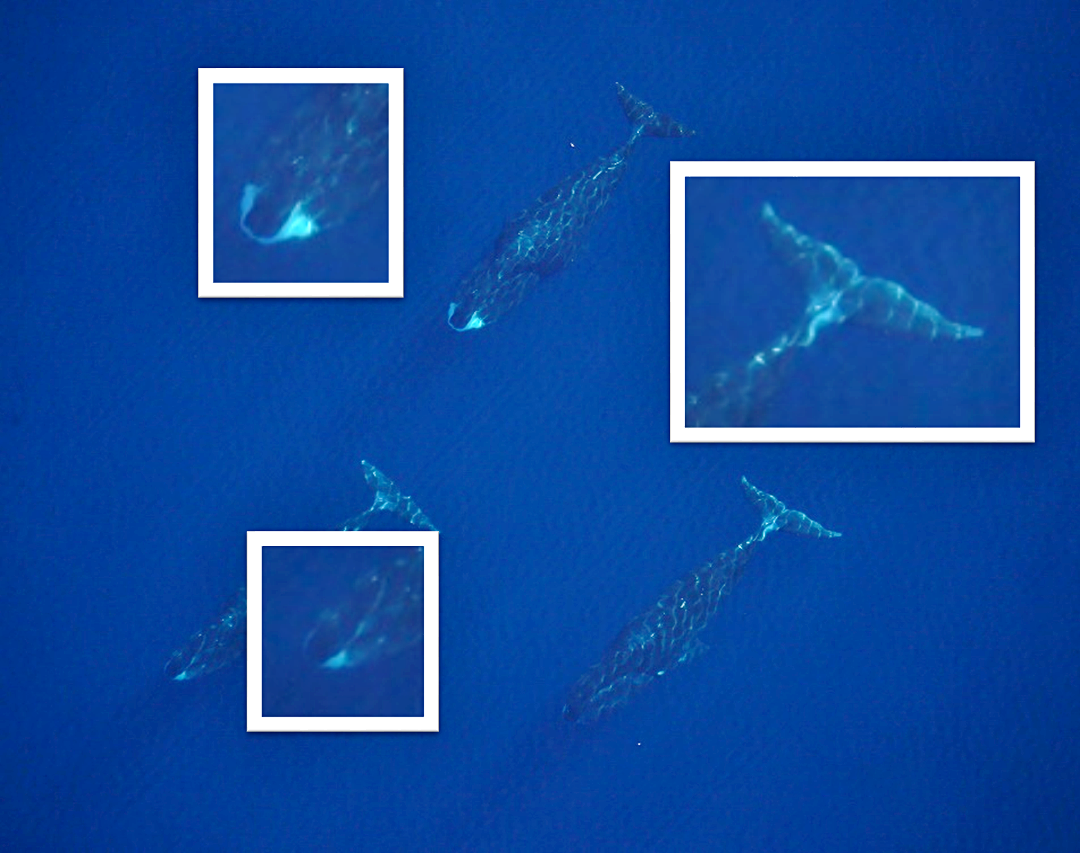 After some time, Lefty dove deeper than we could observe, so we continued tracking the other two whales.  Eventually, the three approached scattered ice floes.  It was remarkable that the whales never changed their course.They swam under each ice floe as if it were not there. 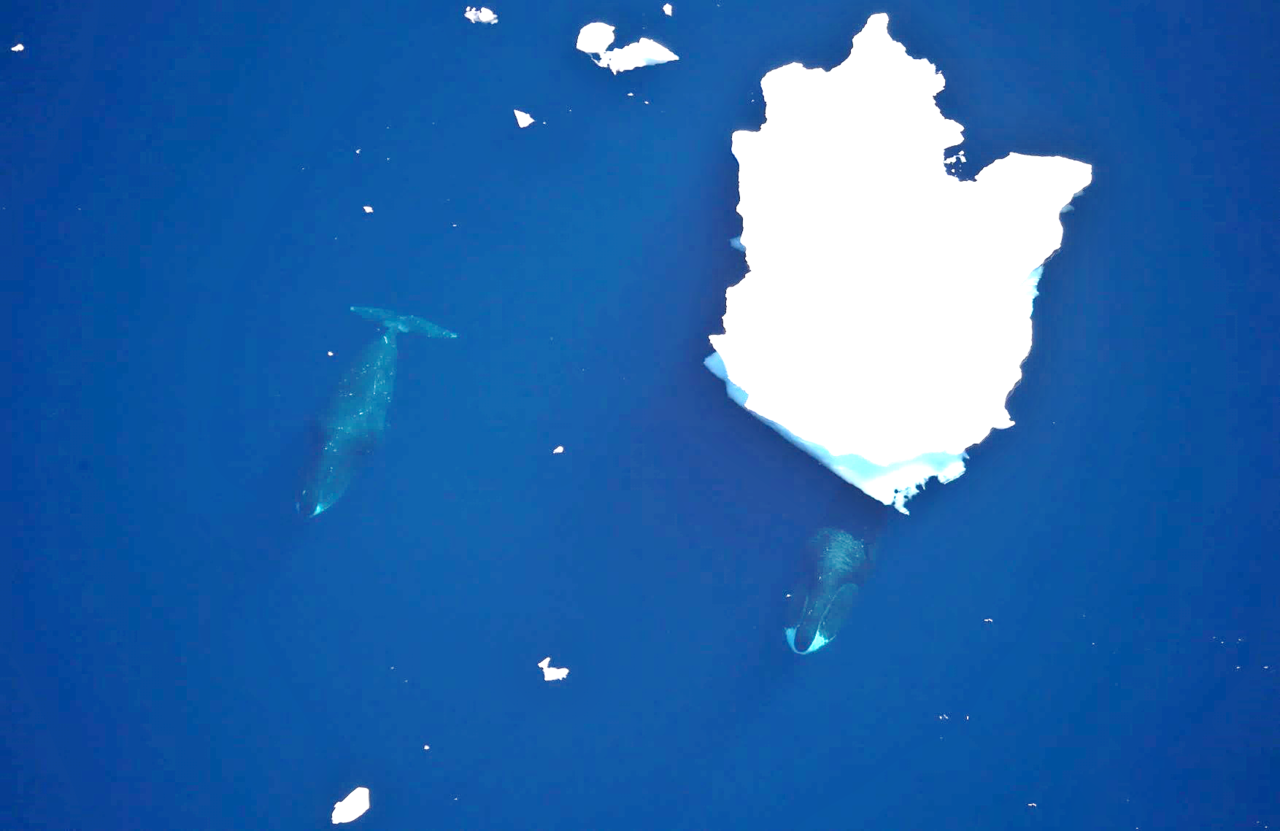 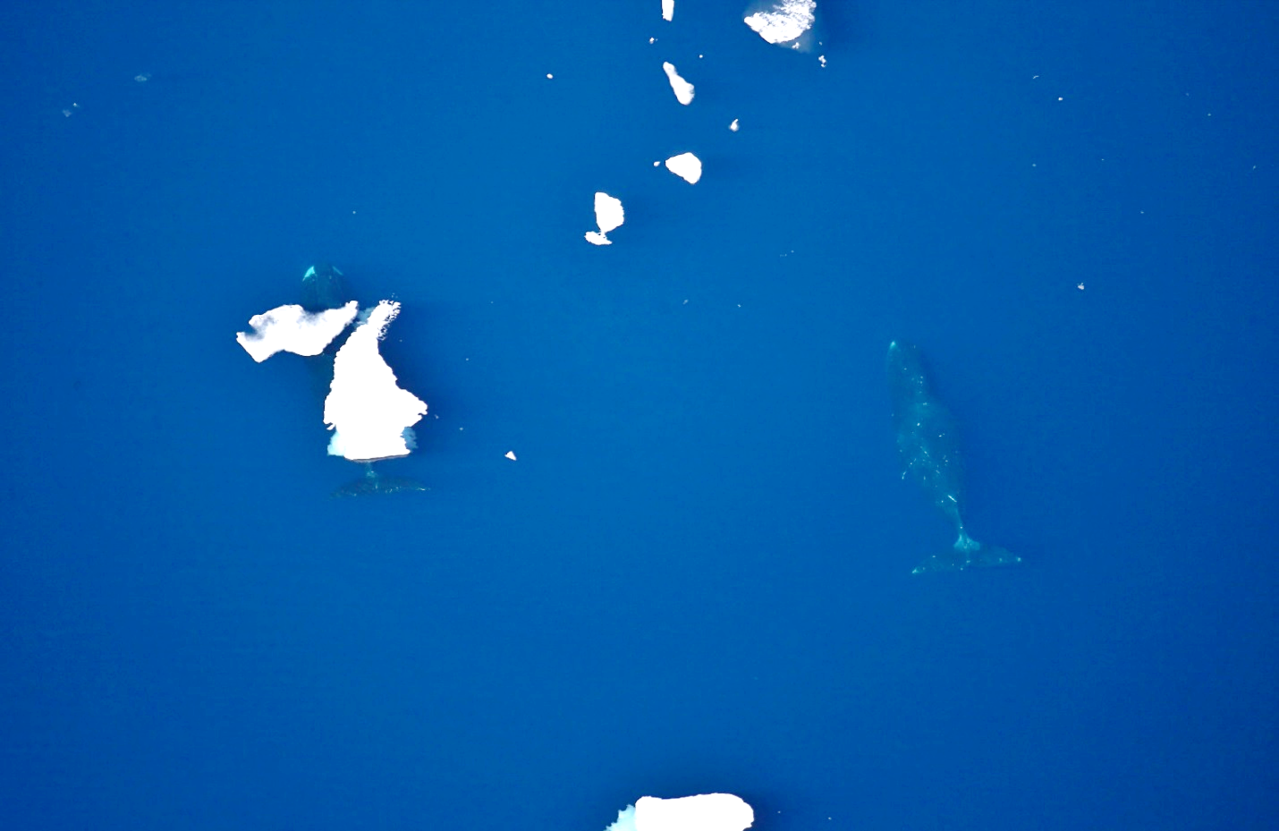 Soon, the whales approached a large sheet of ice. We knew that we’d lose sight of them for a while. We had to remain diligent because they could surface anywhere. 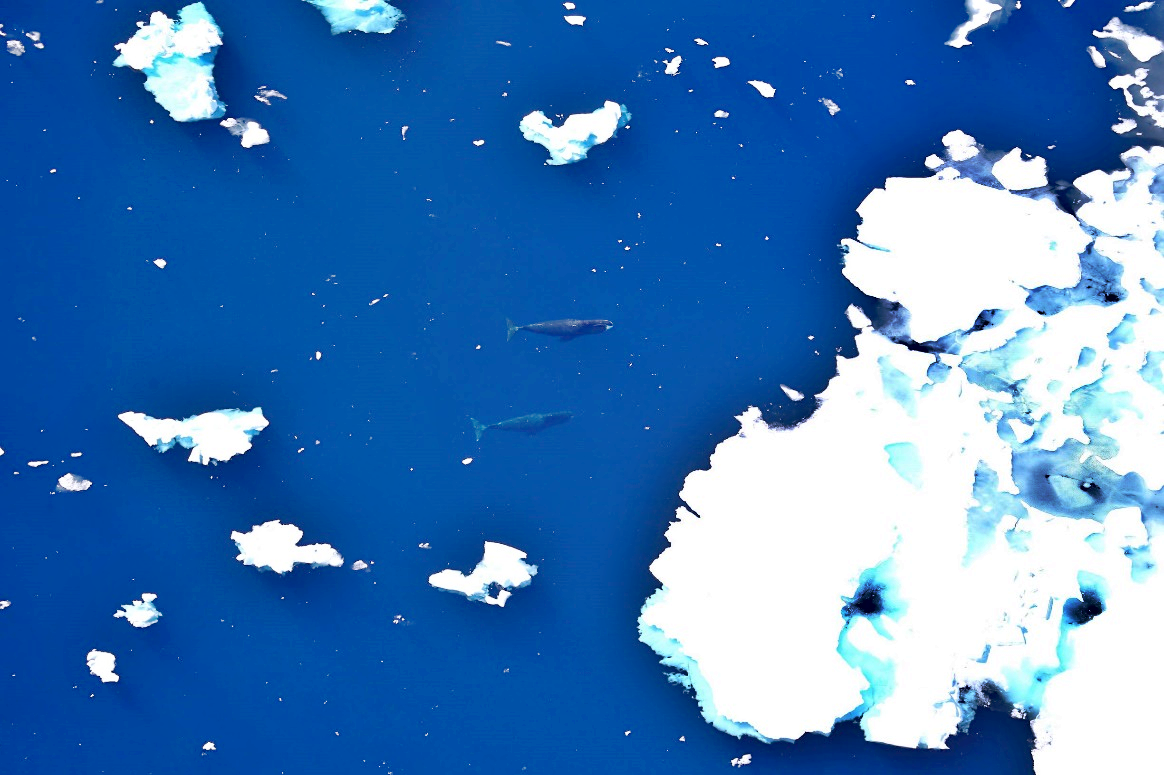 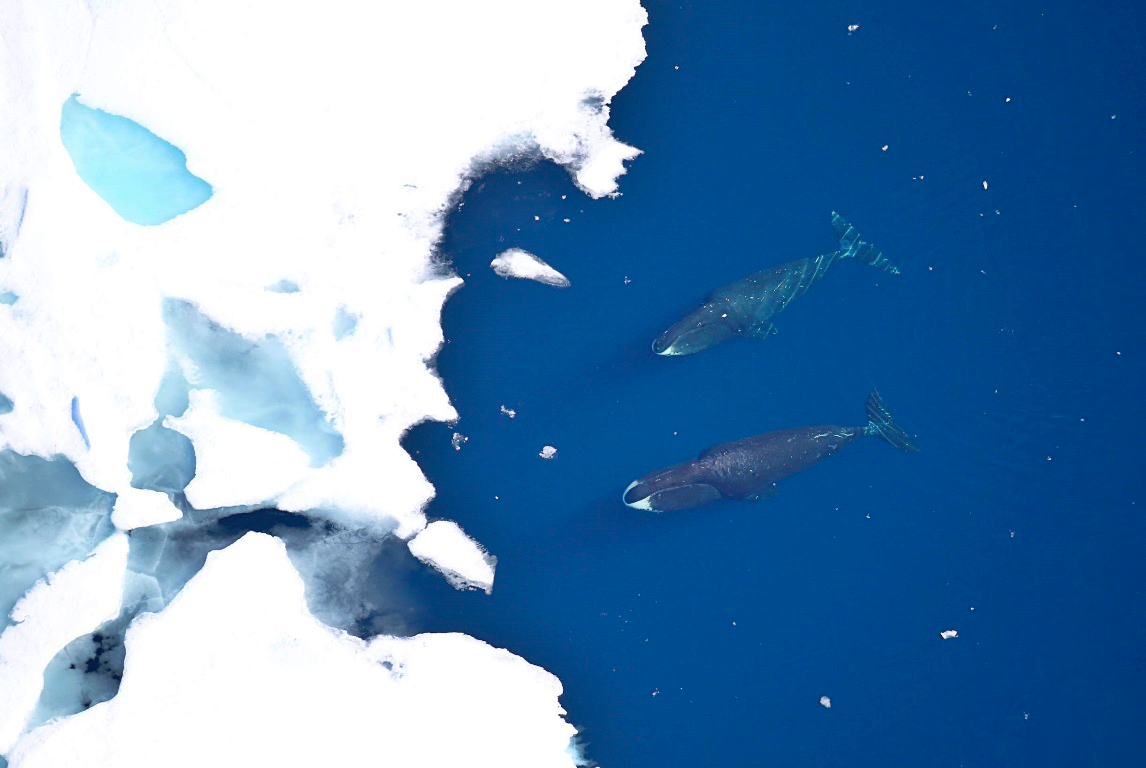 Bowhead whales continue to approaching a large sheet of ice

Malcolm and Righty surfaced together in a large hole, only to continue back under the ice, in the same WSW direction.

When the whales reached the end of the ice sheet, all three surfaced together. 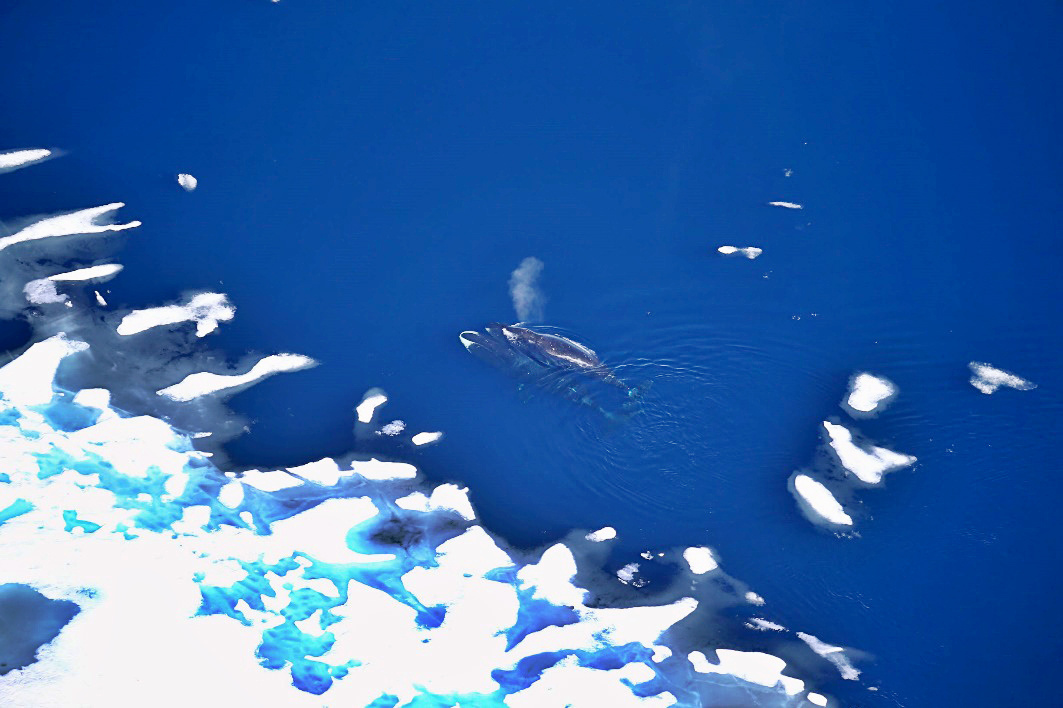 Bowhead whales surfacing in a large hole, before continuing back under the ice. 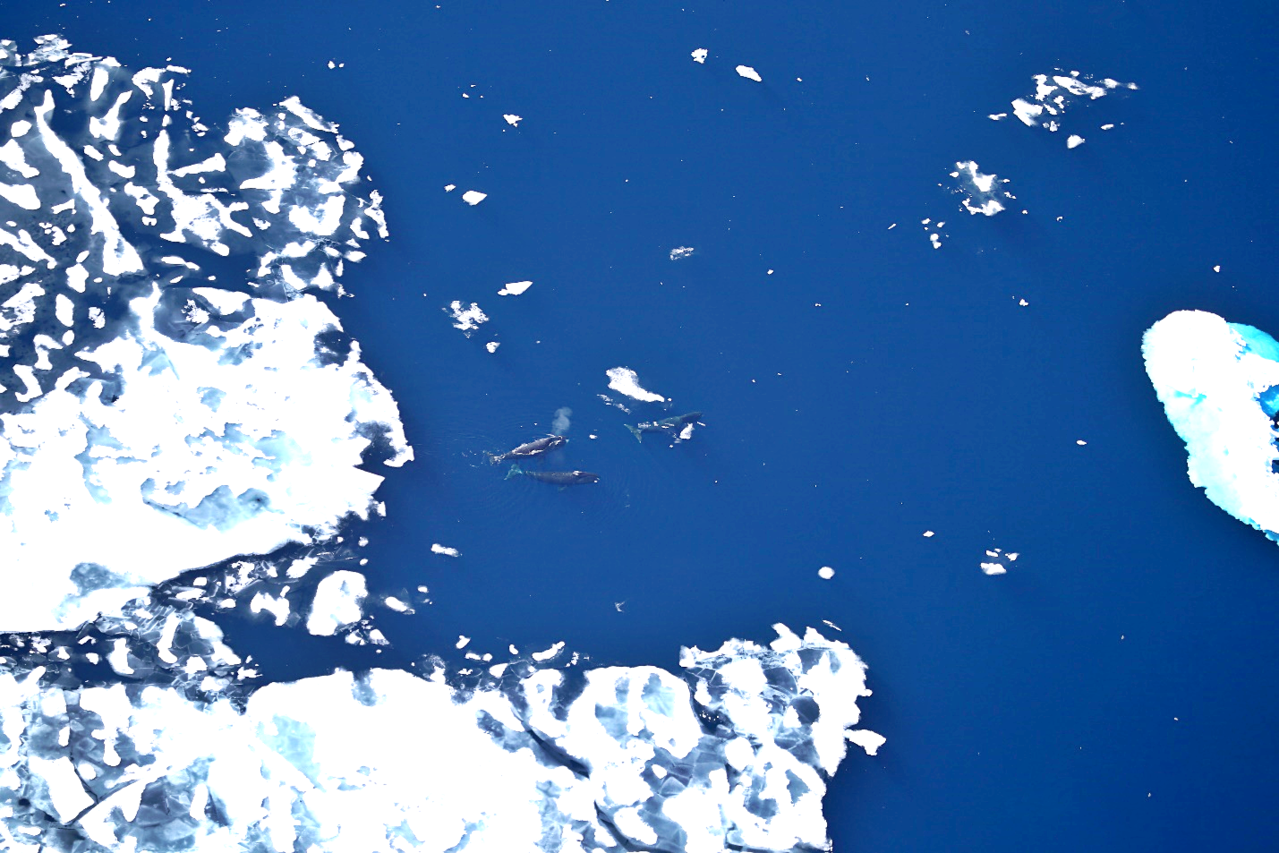 As the whales continued on their course, Malcolm slowed and began tail slapping.

Malcolm ended this bout with a fluke-up dive – normally an indication of a deep dive. Next, Malcolm surprised us by breaching repeatedly. This behavior is not fully understood. But, the leading theory is that it’s used for long-distance communication. 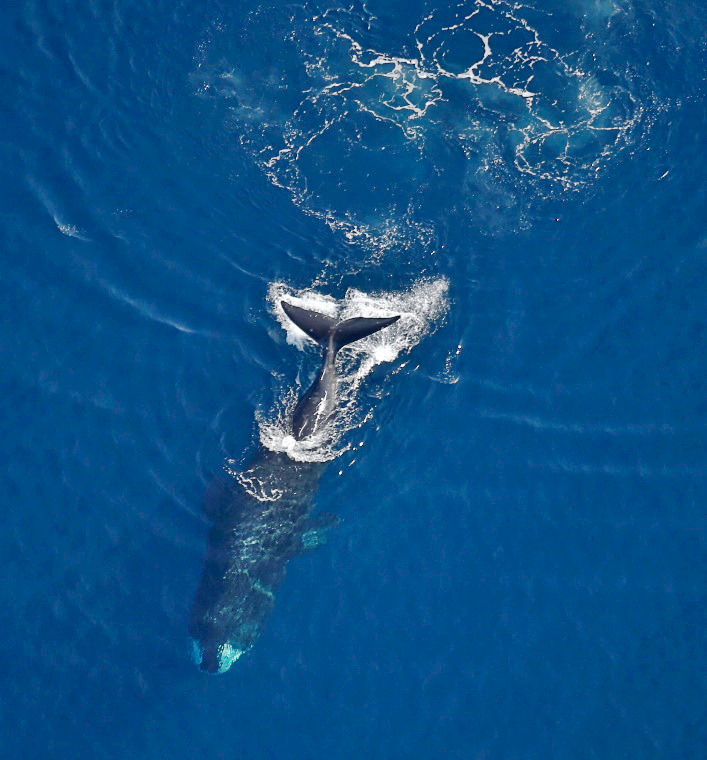 By this time the group split up, thus ending our focal follow. We had spent nearly three hours circling the group and gathering valuable data on whale behavior that will inform our abundance estimate. We headed back to Utqiaġvik to refuel and continue surveying back in the western Beaufort Sea. 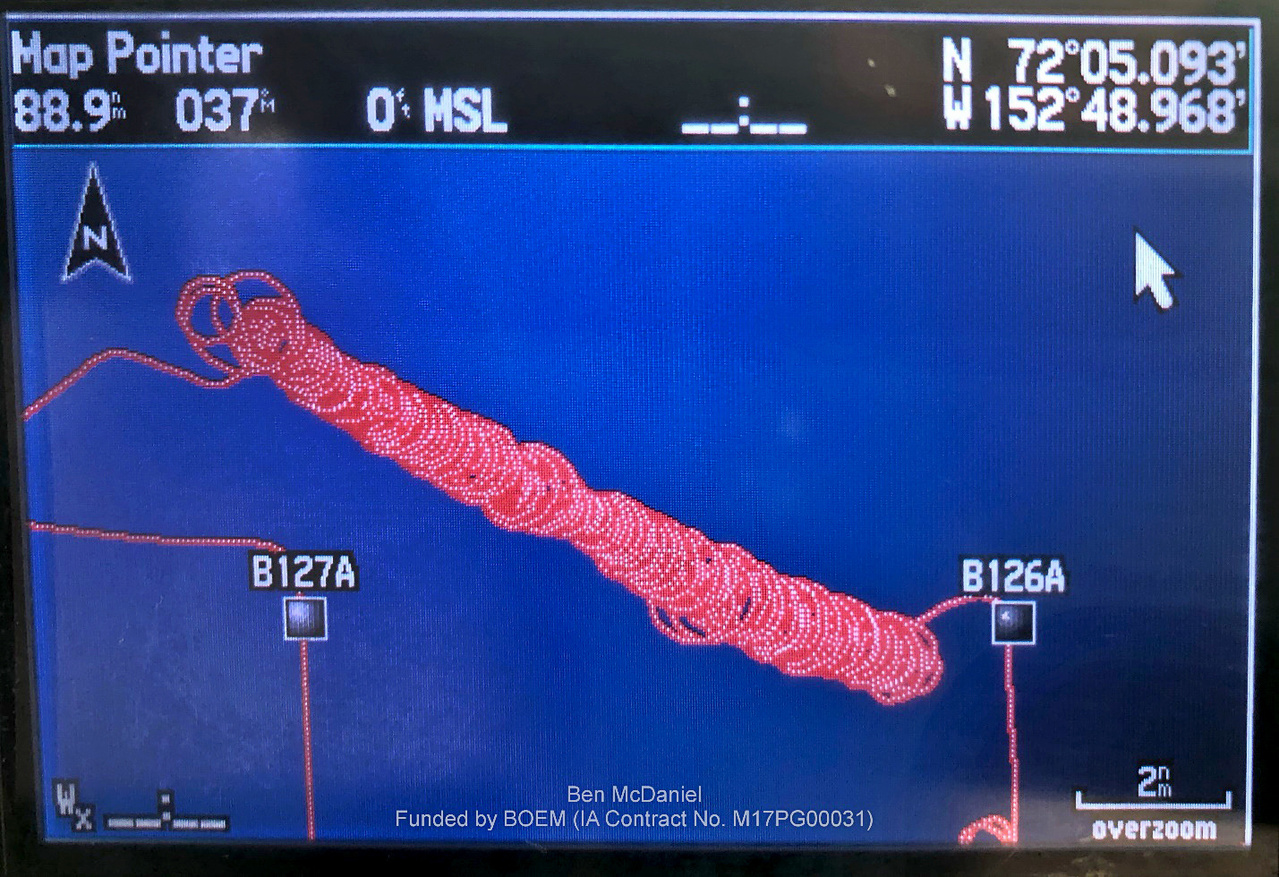 Later that evening (we are in the land of the Midnight Sun!) we spotted a bowhead mother with a very young calf! 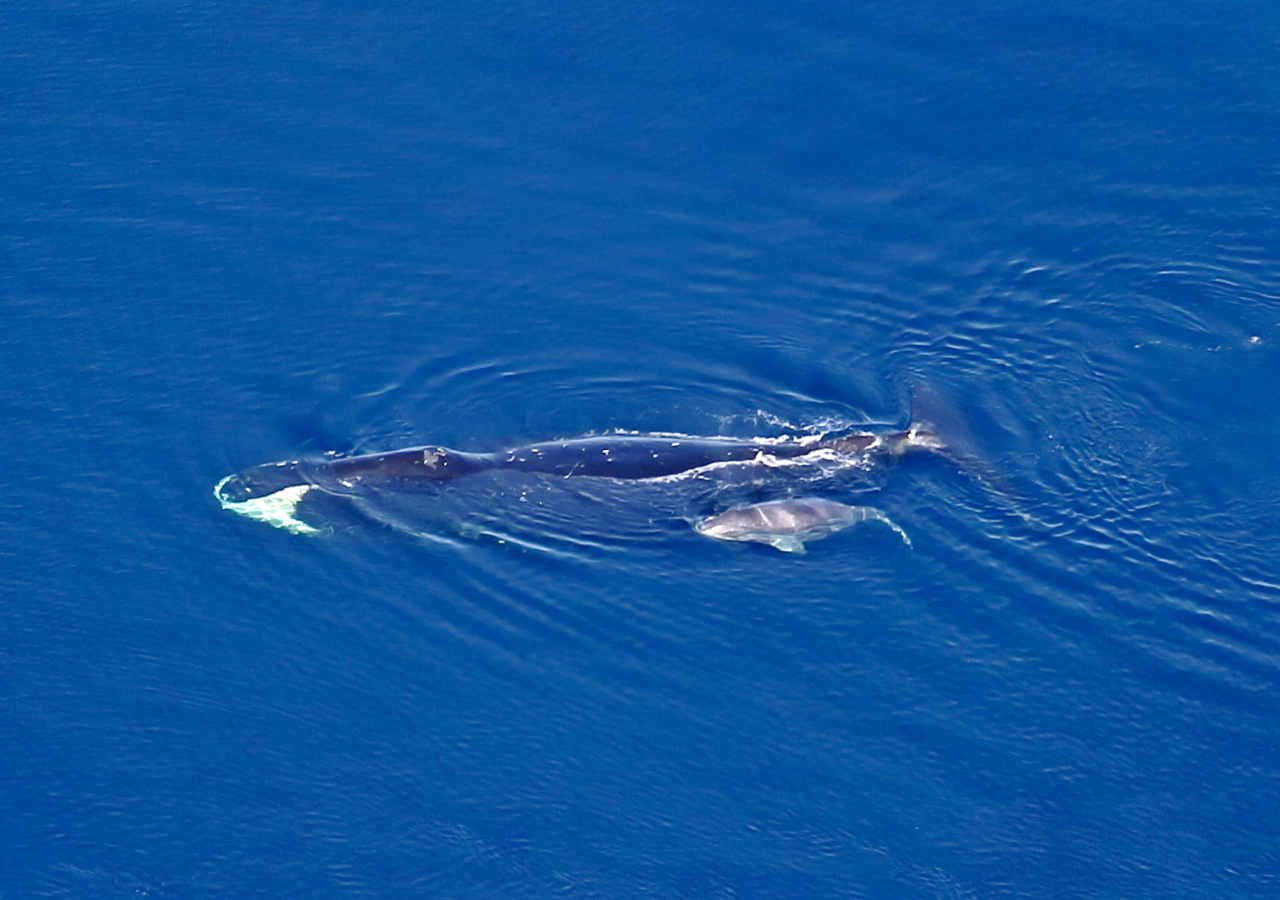 Our last remarkable sighting was a large pod of beluga whales. The estimated high count for the entire group was about 200 animals.

Question: Look at the photo below for 5 seconds. How many belugas can you count?  Can you see any calves? 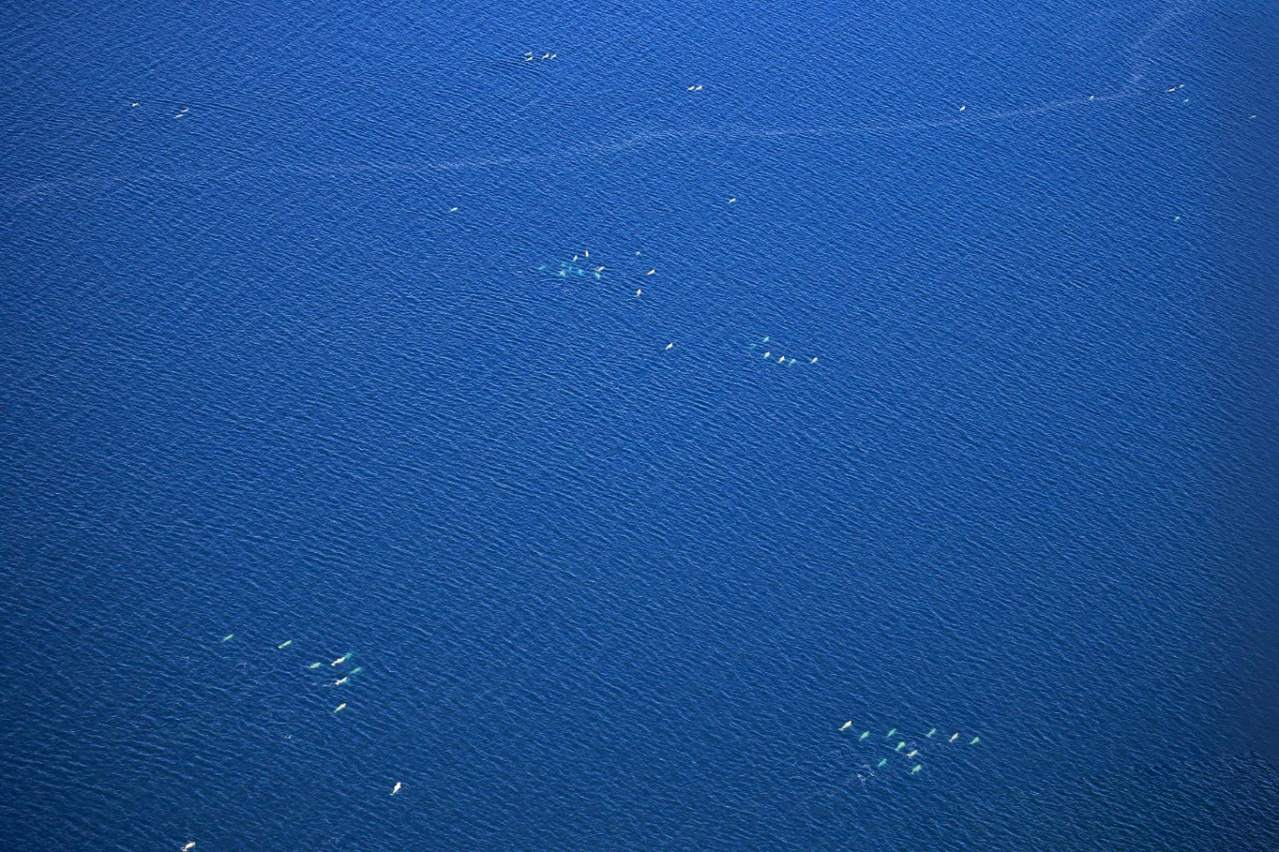 A large pod of beluga whales

Answer: 58 belugas (no calves in the photos, but a few were seen upon circling). 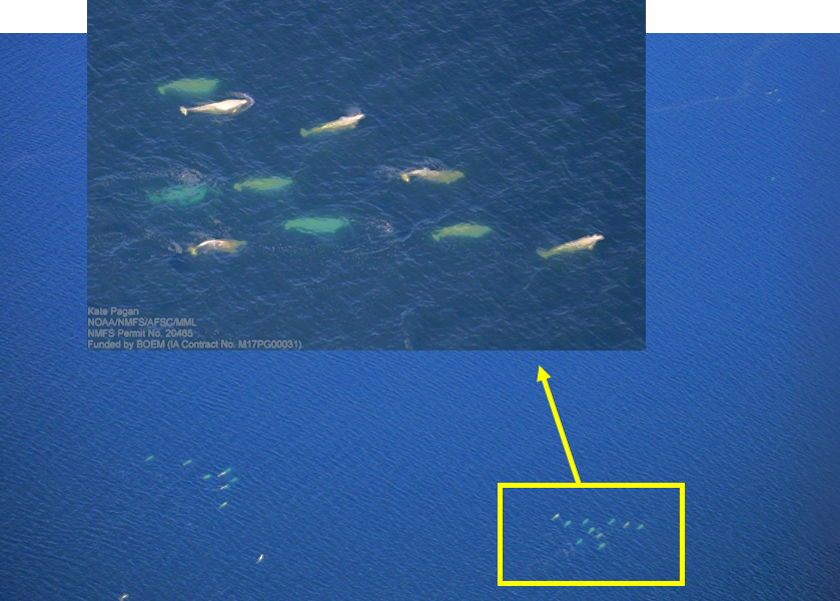 Be sure to check back to stay current on ASAMM’s blog. For our next posting we will have lots more to share since we are adding another survey plane to explore the Chukchi and Beaufort Seas! Kate Pagan is a marine biologist with experience working from land, sea, and air to research and protect manatees, sea turtles, and whales.

This aerial survey of whales, seals, and other marine mammals in the U.S. Arctic has been ongoing since 1979 with support from the Bureau of Ocean Energy Management. It provides a invaluable resource for detecting marine mammal movements and distribution in this remote region. 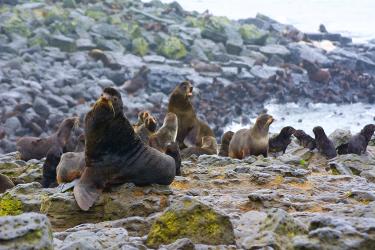