We focus on science-based conservation by developing effective tools and activities to mitigate threats to Hawaiian monk seal survival.

We focus on science-based conservation by developing effective tools and activities to mitigate threats to Hawaiian monk seal survival.

In the Northwestern Hawaiian Islands, our team conducts many recovery activities: 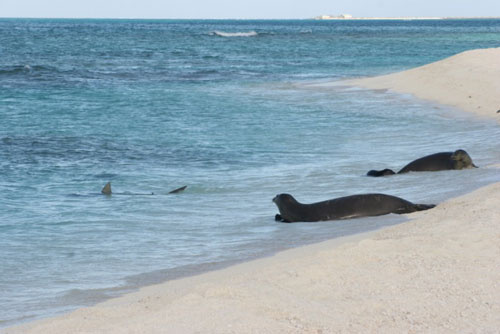 In the main Hawaiian Islands, most of the threats are caused by human activities:

Our scientists, with the support of the public, address these threats with proactive and innovative measures for monk seals in the main, populated islands.

Our research found that about 30 percent of seals are alive today due to direct interventions to protect and support their survival. Indirect interventions, such as removing dangerous debris from pupping areas, likely contribute to a higher number of saved seals. Even small-scale, seemingly minor interventions can have a profound positive effect for an entire endangered population over time.

At French Frigate Shoals, pup survival has been lower than any other location in the Northwestern Hawaiian Islands for about two decades. This is primarily attributed to Galapagos shark preying on nursing and recently weaned pups in nearshore waters. It is estimated that up to 30 percent of all pups at French Frigate Shoals are lost to shark predation every year. Galapagos sharks are found throughout the Hawaiian Archipelago, yet shark predation on young seal pups of other subpopulations is exceedingly rare. It is hypothesized that a relatively small group of sharks are involved in this source of monk seal mortality. They penetrate the shallow, nearshore waters where young pups reside. Dedicated efforts to reduce or eliminate Galapagos shark predation on monk seal pups are ongoing. 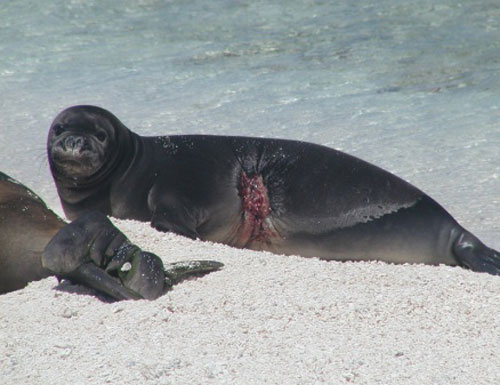 A Hawaiian monk seal pup with a healing shark bite.

Historically, the largest subpopulation of Hawaiian monk seals were found at the small islands in the atoll. This population increased from the early 1960s through the late 1980s. However, from 1989 to 2010, the population decreased by more than 75 percent, largely driven by high juvenile mortality. The demographic structure of the French Frigate Shoals population is now skewed, with relatively few reproductive age individuals. This has led to concerns that this subpopulation is likely to further collapse.

Beginning in the late 1990s, we started a dedicated effort to characterize and mitigate shark predation through intensive observation (direct and via a remote camera system). We are observing both Galapagos sharks and monk seal mother–pup behavior. We identified areas of high shark use, frequency and time of day of shark activity, and individual sharks likely responsible for seal mortality. In addition, Carl Meyer, PhD from the Hawaii Institute of Marine Biology tagged Galapagos sharks for a more detailed analysis of their movement behavior.

In 1997, we began mitigation efforts by moving (translocating) weaned pups from areas with high Galapagos shark predation risk to relatively safer islets within French Frigate Shoals. Nursing pups are at the greatest risk of shark predation, but cannot be moved until they wean because they need to stay with their mothers. Moving weaned pups to low shark use areas may alleviate predation pressure, but alternative methods are required to protect nursing pups.

In 2008 and 2009, visual deterrents and electromagnetic and auditory instruments were deployed to reduce shark predation. While such non-lethal deterrents are preferable to shark removal, their effectiveness was inconclusive. We may test other deterrents as they become available. Lethal removal of a limited number of Galapagos sharks from the atoll could alleviate this source of seal mortality. The Galapagos shark is a top predator at this atoll and the decision to remove a limited number of sharks would involve intensive evaluation. Their removal will likely maintain the overall biodiversity of the atoll.

We work to improve the survival of individual seals with rehabilitation or by moving them to more favorable locations (e.g., with lower predation or disease risk and/or better foraging conditions). We move aggressive male seals that pose a survival threat to the population, or move seals that have developed behaviors which pose a risk to human safety.

When we observe poor juvenile survival, we evaluate multi-year survival trends for each subpopulation. We identify appropriate islands and atolls for collection and release of immature seals to take advantage of favorable conditions elsewhere. The most successful activity to mitigate shark predation on pups at French Frigate Shoals is moving the pups to other islets within the atoll with lower shark predation risk. 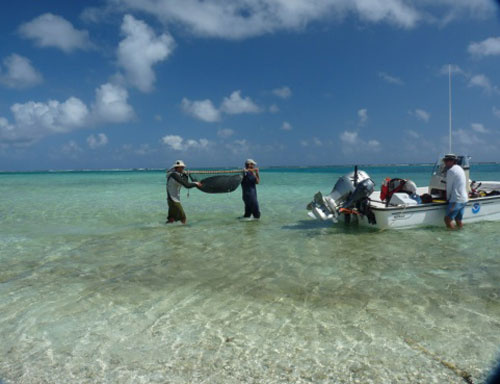 Genetic studies have determined that the entire monk seal population is not genetically differentiated between subpopulations. It is considered a single "stock" (a group of potentially interbreeding individuals) across its entire range. Because seals naturally travel among the islands, seal translocation is not likely to result in genetic or adaptive incompatibilities. Also, prior to a translocation, candidate seals must pass a health screening to minimize the potential of introducing diseases to another site.

We rescue and rehabilitate monk seal pups in close partnership with The Marine Mammal Center’s Ke Kai Ola monk seal hospital in Kona, Hawai‘i. Our field teams identify young pups that are malnourished or underweight and bring them to Ke Kai Ola. They are rehabilitated and eventually released back to their island homes.

Hawaiian monk seal male aggression is typically categorized as either involving multiple or single males. These appear to be two distinct phenomena in terms of the male behavior and the age and sex of the subject seals. Multiple male aggression involves several adult males simultaneously competing to mate with a single seal. 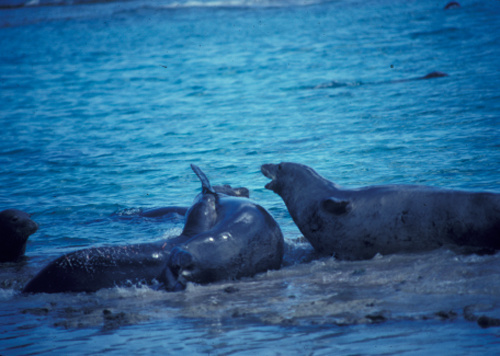 They typically target an adult female, although younger animals and males are targeted in some cases. This can lead to severe traumatic wounds and death. Single male aggression involves one male harassing, mounting and biting a young seal, typically a recently weaned pup of either sex. In the process, the young seal may be drowned or sustain bite wounds that become infected and lead to debilitation or death.

Aggressive interactions between males and other members of the population (for a variety of species, not just monk seals) are normal. They often lead to scratches and relatively minor bite wounds. However, single male aggression in seals becomes a particular concern when an adult male displays an aberrant focus on young animals. Frequent, repeated, and severe aggressive behavior threatens their survival. This is highly unusual behavior among Hawaiian monk seals and cannot be well explained. Previous experience shows that the impact of such aggression on smaller seals can be considerable.

Events involving multiple and single adult male Hawaiian monk seals exhibiting aggression towards adult females and immature seals has led to a significant number of severe injuries and deaths. The loss of even a single female, and her lifetime reproductive potential, represents a significant setback to population recovery of this endangered species. 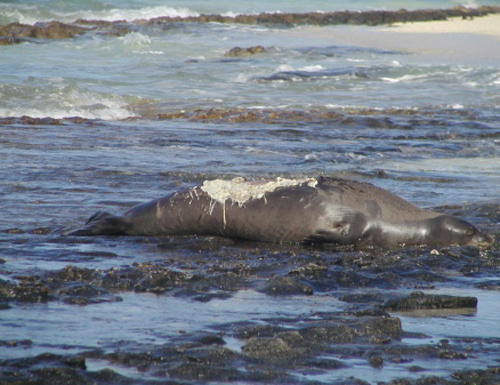 A Hawaiian monk seal with an injury from multiple male seals' aggression.

Single male aggression events have most notably occurred at French Frigate Shoals and more recently at Kure Atoll. Intervention efforts include moving pups from areas where aggressive males frequent, treating injured seals when appropriate, and removing the aggressive adult male. We observed three adult males at French Frigate Shoals repeatedly targeting pups. Two were translocated to Johnston Atoll in 1998, and one was euthanized in 1991. One adult male was brought into permanent captivity in 2012 after he was observed injuring pups at Kure Atoll. This mitigation strategy effectively reduced pup deaths as a result of adult male aggression at this site.

There are unique concerns and management challenges associated with more seals in busy, populated beach areas. The number of fishery-related injuries and mortalities (from hooking or entanglement) has been increasing and additional vessel traffic increases the potential for collision.

Also, there have been serious human-seal interactions. This occurs when a small number of seals that have become habituated to humans have become a safety risk for humans or incurred injuries as a result of interacting with people. Other potentially harmful interactions include human and dog disturbances to seals on beaches and intentional killing. Addressing these increasing threats requires proactive and innovative measures along with public support for recovery of the species.

Harmful human interactions may arise when seals have been fed, either accidentally or intentionally, from fishing gear or fish discards from boats and docks. As a seal becomes focused on this source of food, begging behavior may become increasingly aggressive. Additionally, seals may sustain injury from boat propellers or ingestion of hooks.

Moving seals from high-density human areas to more remote areas in the main Hawaiian Islands has been successful when pups were moved shortly after weaning. It is not as successful for older animals. In most cases, once certain behaviors are established, there are few options available to change behavior that developed as a direct result of human actions. Therefore, our efforts are focused on early detection, including careful review of seal sighting reports and social media.