Coral reefs are underwater structures built by tiny sea animals. Their beautiful shapes and colors are a magnet for divers. They also provide an excellent home for thousands of marine creatures, including fish we love to eat. 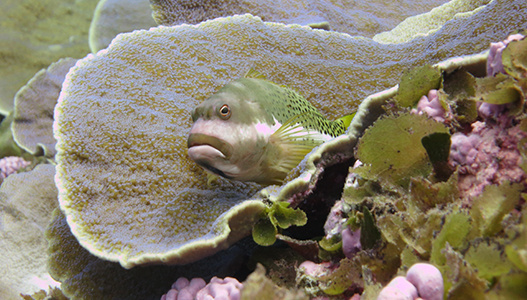 Coral Reefs: Rainforests of the Sea

Coral reefs are the most diverse habitats on the planet. Reefs occur in less than 1 percent of the ocean, yet are home to nearly one-quarter of all ocean species. These ancient structures make a perfect home for millions of species of fish, crabs, clams, starfish, squid, sponges, lobsters, seahorses, sea turtles, and more. That exceptional diversity has given them the nickname, “rainforests of the sea.”

While corals may look like plants or rocks, they are in fact animals who take root on the ocean floor. You can think of them as small jellyfish, glued inside a little rock cave. Their small, soft bodies, called polyps, built that cave—a strong skeleton of calcium carbonate—like a clam grows its shell.

Inside the polyp’s body live tiny one-celled algae, called a zooxanthella. This creature contains chlorophyll and, like plants, turns sunlight into sugar. By producing food and oxygen for the polyp, the zooxanthella gets a safe home. That’s why coral reefs need to be in clean, sunlit waters.

Corals have been on earth for at least 400 million years. Coral colonies create the structure of the reef, growing at a typical rate of 0.008 to 0.12 inches per year. Mature coral reefs can be thousands of years old and as big as a small car. 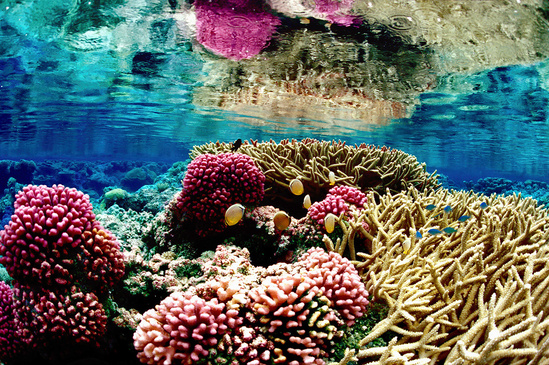 Many commercially important fish species, like grouper, snapper, and lobster, depend on coral reefs for food and shelter. The fish that grow and live on coral reefs are a significant food source for billions of people worldwide.

Reef-related fisheries in the United States are valued at more than $100 million. Half of all U.S. fisheries depend on healthy coral reefs. In Florida, where many fisheries depend on reef-raised species, an estimated $28.7 billion in sales come from commercial and recreational fishing industries.

Coral ecosystems are an important source of new medicines. For example, anti-cancer drugs are derived from certain marine algae, the mucus of cone snails yields a potent painkiller, and a deep-sea sponge shows promise in the treatment of pancreatic cancer.

Despite their great economic and recreational value, coral reefs are threatened throughout the world. For example, elkhorn and staghorn coral populations in the Caribbean have declined by more than 90 percent in the last 25 years. In Florida, an ongoing multi-year outbreak of stony coral tissue loss disease is impacting the continental United States' only living barrier reef.

Threats to coral reefs include:

Once reefs are damaged, they become less productive. Fewer reef residents means less food for young fish, and that leads to declining fisheries. With the loss of colorful marine life, snorkeling and scuba-diving tourists stay away and the local economy suffers.

When carbon dioxide is absorbed into the ocean from the atmosphere, it causes seawater to become more acidic. This dissolves the shells of ocean creatures like corals, and decreases the rate at which they’re able to rebuild. The reef grows more fragile and less able to protect its residents.

Prolonged high water temperatures can cause coral polyps to expel their symbiotic partners, the tiny algae that help them produce food. The coral colony will turn white because the algae provide the color to most hard corals. The polyps cannot live long without their zooxanthellae partners, placing the whole reef at risk.

A healthy habitat is a balanced, interdependent system that can be toppled by non-native species. When new species with no local predators are introduced, they can take over, altering reef habitats by consuming light, oxygen, food, and other resources. When the reef is weakened or corals die, native species will decline and disappear.

Located close to the ocean’s surface, coral reefs are at risk for physical impacts caused by ship groundings, anchor damage, and storms. This can result in significant local losses of corals that are hundreds of years old.

The best way to conserve coral reefs and reduce future habitat loss is to know everything we can about them. We address coral conservation priorities by locating, surveying, and monitoring America’s coral reefs in the Caribbean (Florida, Puerto Rico, U.S. Virgin Island) and the Pacific (American Samoa, Guam, Hawaii, Northern Marianas Islands).

As part of the NOAA Coral Reef Conservation Program, our Coral Reef Information System organizes data from all NOAA and partner actions, including:

The Office of Habitat Conservation’s NOAA Restoration Center provides funding and technical assistance to habitat restoration projects across the country, including efforts to restore coral reefs. We work with the NOAA Coral Reef Conservation Program, the Damage, Assessment, Remediation, and Restoration Program, and other NOAA offices to help threatened shallow coral species recover.

For example, NOAA and partners are working in the Florida Keys to implement Mission: Iconic Reefs, a first-of-its-kind approach to restoring corals at seven ecologically and culturally significant reef sites in Florida Keys National Marine Sanctuary. By the end of this effort, coral cover across the seven sites will be restored from 2 percent to an average of 25 percent.

We participate in a diverse set of coral-related restoration activities across the Caribbean and Florida, as well as in the Pacific. Our work includes:

To address the complex nature of threats that face shallow and deep sea coral, we work to protect these valuable habitats through the NOAA Coral Reef Conservation Program and with partners.

Restoration funding provided by the program enables state and local organizations to conduct projects of value to their communities. For every million dollars in grants we award, 15 or more jobs are created in addition to the resource recovery value.