Wetlands are a pivotal part of the natural system, providing tremendous benefits for coastal ecosystems and communities. They provide us with clean water, flood protection, abundant fisheries, and more.

Coastal Wetlands: Too Valuable to Lose

Look beyond the beauty of our coastal wetlands, and you’ll find this habitat hard at work. Wetlands filter our water, protect our coastal communities from floods, and provide habitat for fish and other wildlife.

A wetland is an area of land that is saturated with water and characterized by plants that can tolerate wet soils​ and low oxygen levels at their roots. Coastal wetlands include all wetlands in coastal watersheds—the entire area from which tidal streams drain to the ocean or inland seas.

Types of coastal wetlands include:

If you love seafood, thank a coastal wetland for your favorite dish! Many kinds of fish—from salmon to striped bass, as well as lobster, shrimp, oysters and crabs—depend on coastal wetlands for places to live, feed, or reproduce.

Coastal wetlands are some of the most productive ecosystems on Earth. They are crucial for healthy estuaries, which generate approximately half of commercially harvested seafood in the United States. The quantity and quality of our seafood is directly related to the quality and extent of wetland habitats.

In 2018, U.S. commercial and recreational fisheries supported 1.7 million jobs and contributed $238 billion in sales. Coastal communities that support these industries depend on healthy habitats for continued seafood production.

Wetlands provide countless opportunities for recreation, from hunting and fishing, to hiking, to observing wildlife. More than a third of all U.S. adults hunt, fish, birdwatch, or photograph wildlife found in natural wetlands. Visitors to beaches and coastal habitats are a major economic driver for local communities, supporting substantial revenue and job growth.

Wetlands act as natural sponges, absorbing and temporarily storing floodwaters. By holding back some of the floodwaters and slowing the rate that water enters a river or stream, wetlands can reduce the severity of downstream flooding and erosion. Wetlands can lower overall flood heights, protecting people, property, infrastructure, and agriculture from devastating flood damages. This protection saves vulnerable coastal communities $23 billion each year.

Salt marshes, seagrass beds, and mangroves play an important role in addressing climate change by removing greenhouse gases like carbon dioxide from the atmosphere and storing them in plants and in the soil. Coastal blue carbon is the term used for carbon that is stored in these coastal habitats.

Efforts to conserve coastal habitats play an important role in preserving coastal blue carbon, preventing the release of carbon into the atmosphere, and reducing the effects of climate change.

According to a 2009 study, the coastal watersheds of the lower 48 states lose 80,000 acres of coastal wetlands each year to erosion, subsidence, sea-level rise, development, and drainage. That’s approximately seven football fields every hour, and a 25 percent increase over the previous 6-year study period.

Some of the most dramatic coastal wetland loss is occurring in Louisiana. In the lifetime of a child born today, approximately 800,000 acres of Louisiana wetlands will disappear, pushing the coastline inland as much as 33 miles in some areas.

This loss of habitat has significant economic and social consequences. For example, habitat degradation and loss has reduced the size and diversity of fish populations. This in turn decreases opportunities for commercial and recreational fisheries.

Almost half of the U.S. population lives in coastal counties. Over time, humans have significantly altered coastal and marine habitats, including coastal wetlands. Development, infrastructure, agriculture, and other human activities have played a role in the disappearance, degradation, and disconnection of wetland habitat.

For example, dikes, tide gates, and ditches have disconnected rivers from their historic floodplains. This limits the amount of floodwaters that wetlands are able to soak up, putting nearby communities at risk of frequent flooding.

If you live near a river, even hundreds of miles from the coast, that river eventually flows into a coastal wetland. Rivers pick up excess fertilizer, pesticides, and sediment as they flow downstream. These pollutants can then accumulate in wetlands.

In healthy wetlands, plants help filter out impurities before they reach the ocean. Unfortunately, high concentrations of pollution can overwhelm a wetlands’ filtration capacity. Excess nutrients and toxic chemicals can then concentrate in waterways, causing algal blooms and “dead zones” where underwater life is unable to survive.

The effects of climate change—such as warmer temperatures, more extreme weather, and rising sea levels—can pose challenges for wetlands. For example, rising sea levels can inundate shallow coastal areas with seawater. Salt marshes, mangroves, and other coastal wetlands may be at risk of being converted to open water.

At the same time, wetlands can provide protection from the effects of climate change, such as flooding caused by more extreme weather. During Hurricane Sandy, for example, wetlands protected areas of the East Coast from more than $625 million in direct flood damages. But the continued loss of coastal wetlands means less protection for coastal communities from the impacts of strong storms.

Once valuable habitat is damaged or lost, it is costly to recover the benefits it provides. NOAA’s work sustains valuable coastal and marine habitats and the communities that depend on them.

Many coastal wetlands have been identified as “Essential Fish Habitat,” indicating an increased urgency and value in protecting these areas. Using our extensive scientific and management expertise, we provide recommendations to avoid, minimize, and compensate for the adverse effects of dredging, fill, and other actions that threaten healthy habitats.

When a coastal wetland is lost or degraded by oil spills, invasive species, or decreased tidal or river flow, we help restore these valuable areas. The Office of Habitat Conservation’s NOAA Restoration Center provides funding and technical assistance to habitat restoration projects across the country, including in coastal wetlands. We’re involved in large-scale wetland restorations in Louisiana, where the most dramatic coastal loss is occurring, as well as locally significant projects across the U.S.

We Partner to Support Wetland Habitat 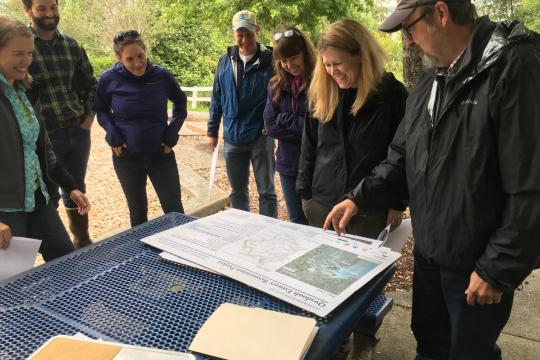 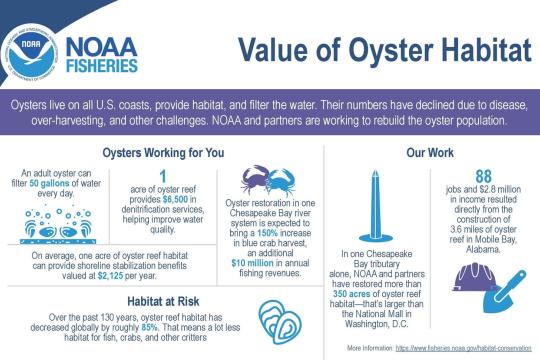 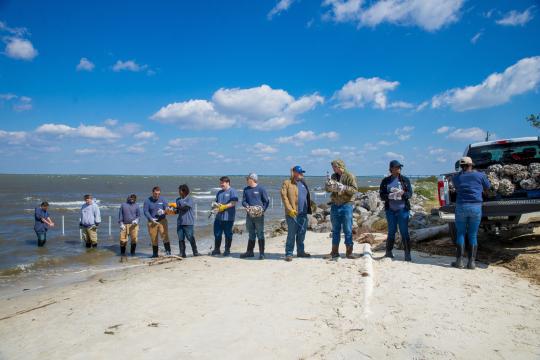