Skimmer trawls differ from most other trawls in that vessels push nets in shallow, nearshore waters.

A skimmer trawl consists of an L-shaped frame constructed from metal pipe, which keeps the trawl mouth open. Skimmer frames keep the net on the bottom but are flexible to glide over obstacles. A chained footrope and the tickler chain are used to stir up the bottom and raise the catch into nets ranging from 25 to 72 feet across.

Skimmer trawls are fished from booms on either side of the vessel. Nets remain in the fishing configuration while the codend is emptied (approximately every half hour), allowing fishermen to more quickly retrieve the catch. 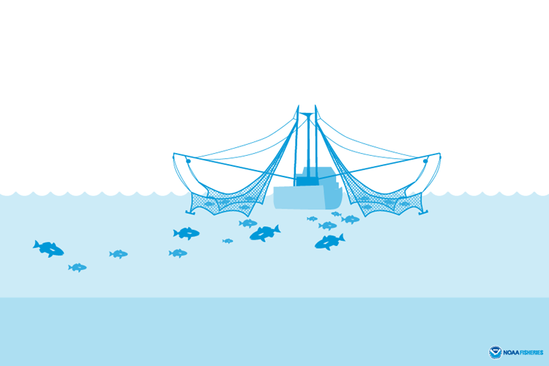 Sea turtles can become captured in skimmer trawls as they rest and breathe at the surface. Because skimmer trawls operate in shallower depths with shorter tow times, mortality has historically been considered low for this fishery.

Fishermen empty the net throughout the tow so turtles are not held underwater for prolonged periods of time and often can be brought on board soon after they are observed captured. However, stress and injury can still occur within the trawl, including broken appendages and entanglements around the head, neck, or flippers.

Small cetaceans, like dolphins and porpoises, spend the majority of their time at the surface of the water while swimming and can easily become caught in the path of skimmer trawls.

While shorter tow times at the surface allow fishermen and observers to more quickly identify, respond to, and release entangled marine mammals, being caught in fishing gear can still be stressful and may cause lasting damage.

Smaller marine mammals such as harbor seals, common dolphins, and bottlenose dolphins can become twisted and wrapped in netting while trying to escape, making it even more difficult to facilitate safe release.

NOAA Fisheries observers deployed on skimmer trawl boats have helped characterize bycatch for this gear type, although the amount of observer coverage is very limited and more sea turtle bycatch data is needed.

NOAA Fisheries has partnered with the fishing industry to develop turtle excluder devices for skimmer trawls that reduce bycatch of sea turtles.