An annual effort to count the number of river herring migrating through historic Town Brook is underway. NOAA’s partners in the Town of Plymouth are asking citizen scientists to help.

As river herring migrate upstream in Town Brook, they swim past an underwater monitoring camera near the Jenney Grist Mill. From April through June, the 24-hour camera records short videos (10 to 60 seconds) of river herring passing by. Each video is then immediately uploaded to an online repository.

That’s where the citizen scientists come in. Anyone can help count the number of herring passing past the camera. Simply visit the Plymouth river herring website, read through a brief list of instructions, and start counting. You can also watch a live-stream video of current conditions in Town Brook.

Scientists use these video counts to estimate the total number of herring that migrate through Town Brook. They also track changes in river herring populations over time. Every video count brings us one step closer to an accurate estimate of the total herring run.

Volunteers have been counting fish in-person at Jenney Grist Mill since 2008. The underwater monitoring camera was installed in 2019 with funding provided by the NOAA Preserve America Initiative.

The 1.5-mile Town Brook flows from the freshwater Billington Sea to the Atlantic Ocean near Plymouth Rock. For hundreds of years, dams in the stream blocked fish from passing and caused populations to decline. By the early 2000s, the stream was blocked by six dams and barriers. Herring runs were reduced from an estimated capacity of nearly one million fish to just 150,000. 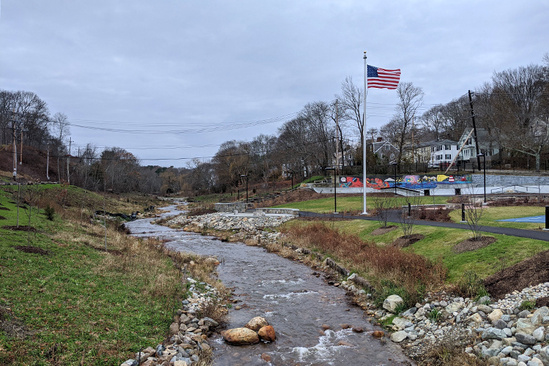 The site of the former Holmes Dam is home to a new playground for Plymouth residents to use.

The NOAA Restoration Center worked with the Town of Plymouth, Commonwealth of Massachusetts, and others partners to remove these barriers to reopen the stream. The first dam was removed in 2002. As of 2019, five dams had been strategically removed and major improvements to fish passage had been implemented at the sixth dam site. The final barrier, Holmes Dam, was removed just in time for last year’s spring herring run.

The Town of Plymouth provided more than $9 million toward the effort. NOAA’s Office of Habitat Conservation, through the NOAA Restoration Center, contributed $3.7 million in grants. NOAA also provided additional technical support, permitting guidance, public outreach and education. We also provided monitoring support to restore the ecology of this stream system for the Plymouth community. Last updated by Office of Habitat Conservation on April 17, 2020