Sea turtles have long been a key part of the cultural and natural resource heritage of Hawaiʻi. Once sought for their meat, Hawaiian green sea turtles, or honu, suffered a sharp population decline from overharvest in the early 20th century. Today, honu in Hawaiʻi are making a comeback thanks to the support of dedicated community members, and state and federal protections. Increasing numbers of honu in Hawaiʻi mean there is more opportunity for observing them on beaches and in nearshore waters, and where their behavior can be predictable, honu have become a sought-after tourist attraction.

The convergence between turtles, tourists, and traffic can create challenges in areas where the infrastructure may not be sufficient to support large numbers of wildlife viewers. For instance, residents of the North Shore of Oʻahu have expressed concerns about traffic congestion near the popular turtle viewing beach of Laniākea. This situation is not unique to Oʻahu. Communities throughout the Hawaiian Islands are experiencing similar issues that require collaborative solutions.

The Hawai‘i Department of Transportation is working to address traffic and pedestrian safety issues at Laniākea. We continue to study the basking honu population and work collaboratively on the management and conservation of honu at this and other locations throughout the state.

A History of Conservation at Laniākea Beach

Reports of green turtles basking (resting or sleeping on the beach) at Laniākea—a popular surf spot in the Kawailoa ahupua‘a (land division) of Waialua, O‘ahu—began in 1999. Turtle sightseeing began soon after. By 2005, significant reports of disturbance and disrespectful public behavior toward the turtles was occurring. The community rallied and joined federal efforts to protect the turtles. A non-profit organization named Mālama na Honu formed in response to the public pressure on honu at Laniākea.

Mālama na Honu’s mission is “to protect Hawaiian green sea turtles through education, public awareness and conservation, all in the Spirit of Aloha.” In 2007, under the authority of the Endangered Species Act, NOAA Fisheries began providing grant funds to this non-profit group to support public outreach activities that promote respectful behavior around the honu at Laniākea. Mālama na Honu’s presence on the beach has significantly helped reduce public disturbance to basking turtles.

Mālama na Honu volunteers are caring and dedicated educators. From 10 a.m. to sunset, 365 days a year, they brave the blazing sun, storms, and monster winter swells to help protect the honu. They educate onlookers on the turtles’ protected status; encourage responsible viewing from the recommended minimum distance of 10 feet; and share each turtle’s history. The volunteers also collect and report data to help NOAA Fisheries understand the behavior and trends of basking honu at Laniākea, where a total of 35 individuals have been documented since the program’s inception. Volunteers, however, are not responsible for enforcing laws, managing traffic or tourism, or controlling the number of people on the beach.

The information collected by Mālama na Honu has contributed much to what we know and understand about basking turtles in Hawaiʻi. This information has also helped us determine what constitutes harassment to sea turtles or a violation under the Endangered Species Act. The fact that honu are still basking at Laniākea, instead of moving to a less popular location, is testament to the outreach program’s success.

“When people follow our guidelines to keep a distance of at least 10 feet, the turtles’ basking or foraging behavior exhibits little to no change,” said Irene Kelly, sea turtle recovery coordinator for the NOAA Fisheries Pacific Islands Regional Office. “Wildlife will often leave their habitat if they’re chronically harassed or disturbed. That is not what is happening at Laniākea as we’ve witnessed more, not fewer, turtles basking over time.”

According to Kelly, there are currently 18 to 20 honu “regulars” that consistently bask at Laniākea (though not all on the same day!).

“We have documented and tagged a total of 35 individuals that have basked at Laniākea since 1999. We have some regulars, but there’s usually anywhere from zero to four turtles basking at Laniākea each day,” she said. “While guidebooks and social media spotlight the area, the turtles there only make up a very small portion of the green sea turtle population.”

Basking is a behavior unique to Hawaiʻi where green turtles deliberately crawl out of the water to rest and warm up on the beach. There are a few theories as to why, but scientists believe basking has to do with thermal regulation, which may also aid in digestion. What is interesting is that not all Hawaiʻi honu bask on the beach—some also bask by floating at the surface of the water. Research suggests there is a correlation between basking behavior and the ocean’s sea surface temperature, which supports the thermo-regulation theory.

Thankfully, the Hawaiʻi honu nesting population is increasing at a rate of 3 to 5 percent per year statewide, and as a result, they are on a positive path to recovery. Still, honu are a threatened species, and achieving their full recovery requires the collaborative efforts of community members, wildlife enthusiasts, and government agencies. Primary threats to the species include nesting habitat loss due to sea level rise and storms, fishery interactions, disease, and boat strikes.

At popular basking beaches, it is important to find the right balance between providing opportunities to respectfully observe and learn about Hawaiʻi honu in the wild, and giving them sufficient space and peace to rest and carry out their normal behaviors without interference. It is also important to foster turtle viewing opportunities that are respectful of resident communities. Work remains to recover the Hawaiʻi honu, as well as address the challenges, like traffic, that result when guidebooks and social media spotlight where turtles can be observed.

Relocating turtles from areas like Laniākea, as some have suggested, isn’t a viable solution. Turtles are excellent long-distance navigators and would return to their preferred basking sites.

However, outreach and education can have a major impact when it comes to protecting honu and other species. The grants that NOAA Fisheries issues under the Endangered Species Act are critically important for the continued operation of education and outreach groups, like Mālama na Honu, which help to protect honu through expanded public education, outreach, and monitoring.

As we continue collaborating with partners on research, education, and enforcement—there are ways that you can help, too.

What Can You Do?

You can help Hawai’i honu by reporting the following:

If you’re unsure what to report, check out this reporting and enforcement guide. 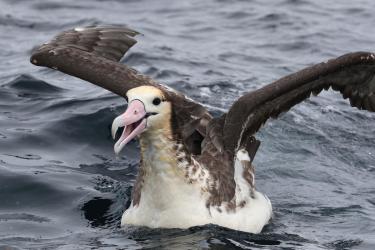 Short-tailed Albatross have an 11-foot wingspan making them one of the world's largest seabirds, they are listed as endangered under the Endangered Species Act. Credit: NOAA Fisheries
Feature Story 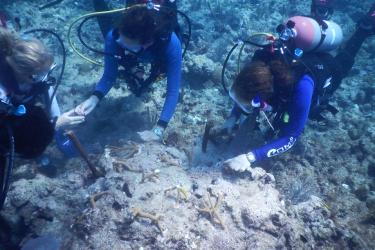 Outplanting, or planting coral fragments grown in nurseries back onto reefs, is a type of restoration activity.
Feature Story 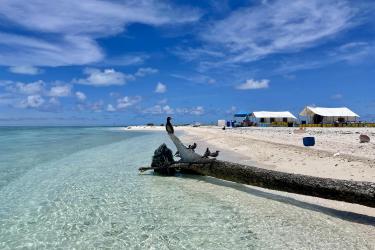 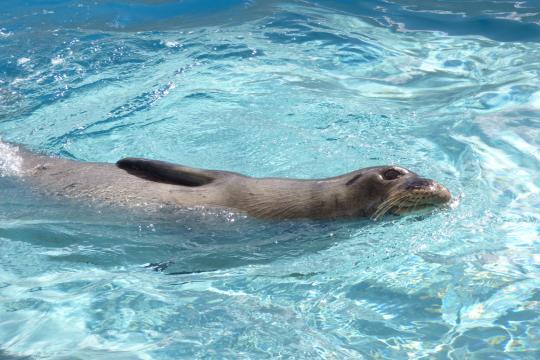 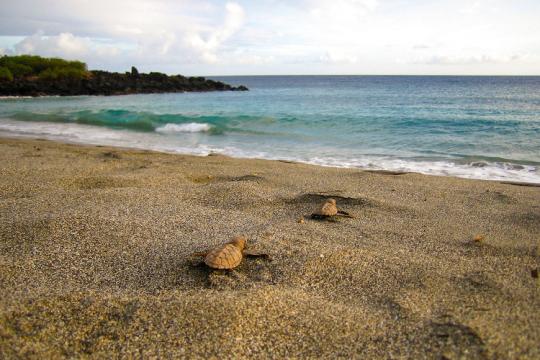 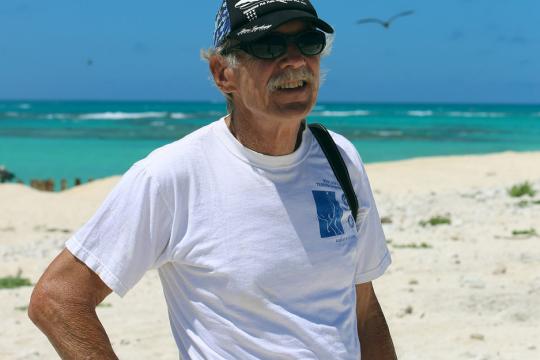