NOAA Fisheries scientists and colleagues are conducting health assessments and tagging gray seal pups on islands off Massachusetts and Maine.

It’s gray seal pupping season in New England! NOAA researchers are working with colleagues to gather data from pups on Muskeget and Monomoy islands off the southeastern Massachusetts coast. 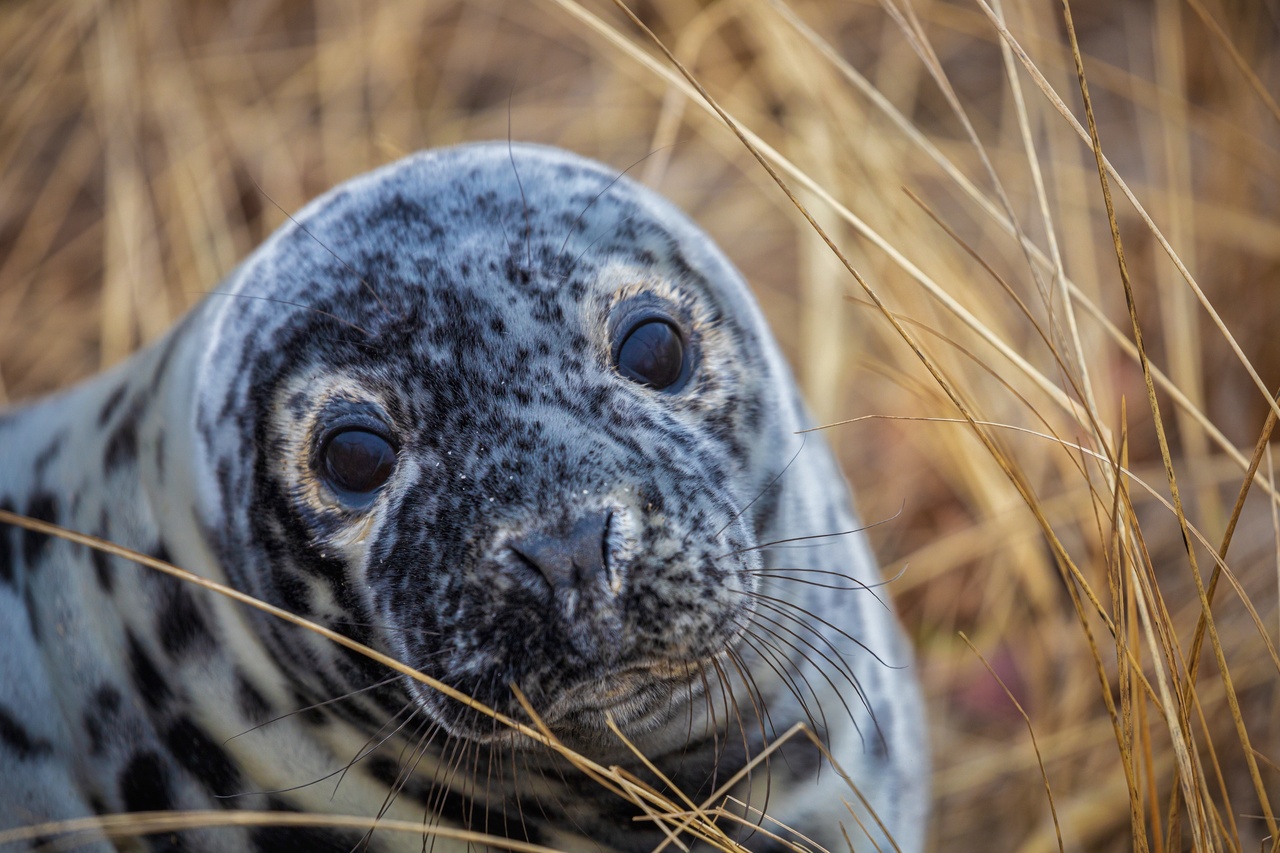 Pupping season generally runs from mid-December to early February, peaking in mid-January. Our researchers have conducted studies of animal abundance, distribution, and health on the islands in January for the past eight years. One research team is working on Muskeget Island off Nantucket, the largest gray seal breeding and pupping colony in the United States. Another team is on Monomoy, an island near Chatham on Cape Cod that is part of the Monomoy National Wildlife Refuge. 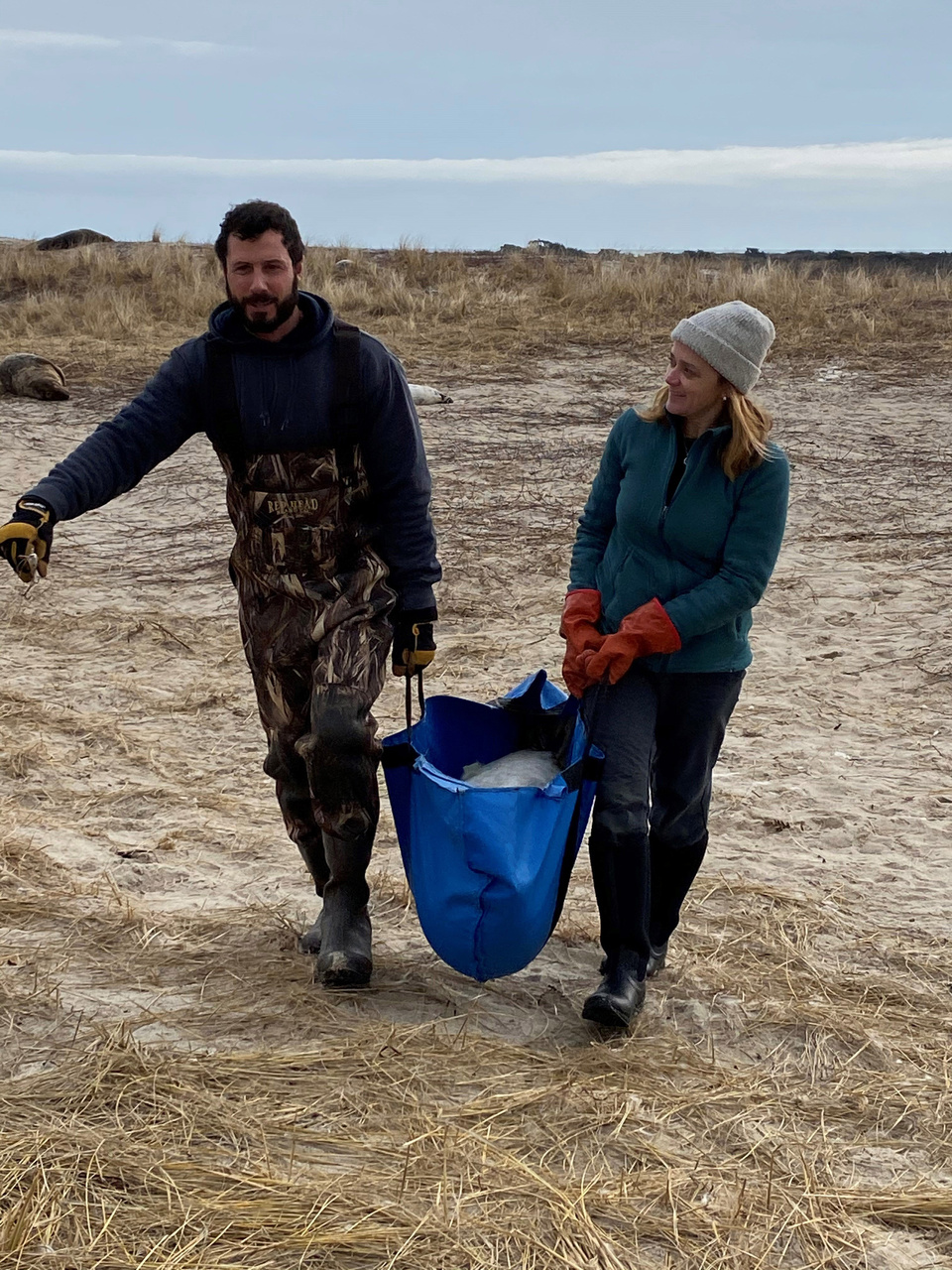 Kimberly Murray, who coordinates the seal research program at the Northeast Fisheries Science Center’s Woods Hole Laboratory and leads the team on Muskeget Island, outlined the teams’ goals. “We plan to place 20 satellite tags and nine acoustic tags on the weaned gray seal pups, and to collect as many health samples from pups as we can. Our goal is to sample 50 pups on Muskeget and 100 on Monomoy, but that depends on factors such as weather conditions, scheduling, and departure of weaned pups.”

The team also sampled 14 weaned gray seal pups on Seal Island in Maine. They placed five satellite tags and two acoustic tags on seal pups there to learn where those pups go. On January 30 researchers sampled and tagged 15 gray seal pups on the Coskata-Coatue Wildlife Refuge, which includes Great Point Light, on Nantucket and collected scat or seal poop for microbiome/microplastics/food habits work.

Satellite and Acoustic Tags in Use 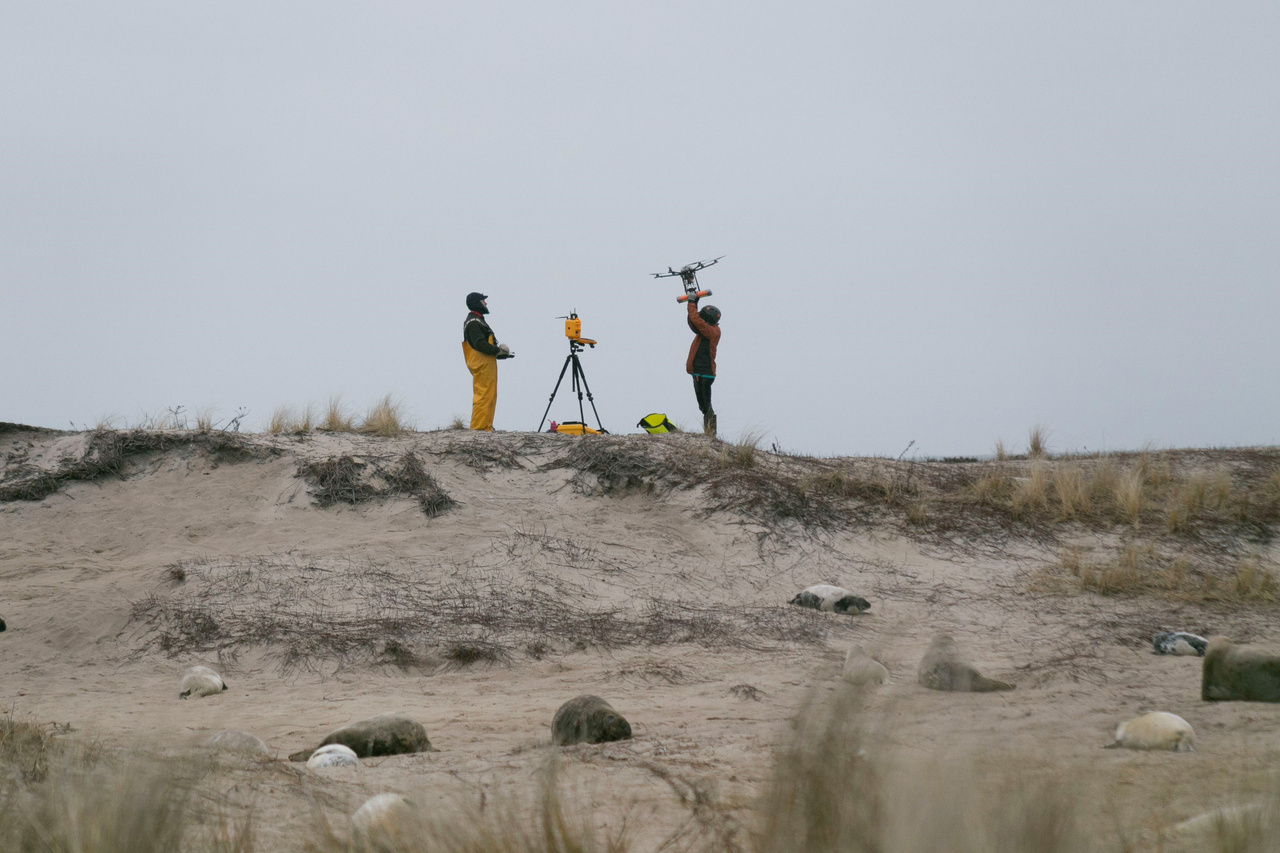 Photos from a drone help researchers understand the distribution and abundance of seals on Muskeget Island during pupping season. Photo: NOAA Fisheries

The satellite tags will stay on for several months to reveal how long the pups remain in the pupping colonies and where they go after leaving. Some tags also collect the animal’s dive behavior to disclose potential foraging areas.

Researchers are interested in the amount of time spent in particular areas of U.S. and Canadian waters. This will help them understand seasonal changes in abundance and evaluate risk of fisheries interactions.

The acoustic tags will stay on from 1 to 2 years. If receivers throughout the Gulf of Maine and the Mid-Atlantic detect the tags, scientists will get information on the seals’ seasonal presence and survival. Scientists from the Northeast Fisheries Science Center and the Massachusetts Division of Marine Fisheries placed the receivers to monitor fish, but they can be used to detect other tagged animals as well.

Sampling in the Largest Pupping Locations

Project researchers capture, measure, and weigh each weaned gray seal pup. They also take biological samples such as blood, mucous, hair, and skin to assess health  and for research purposes. 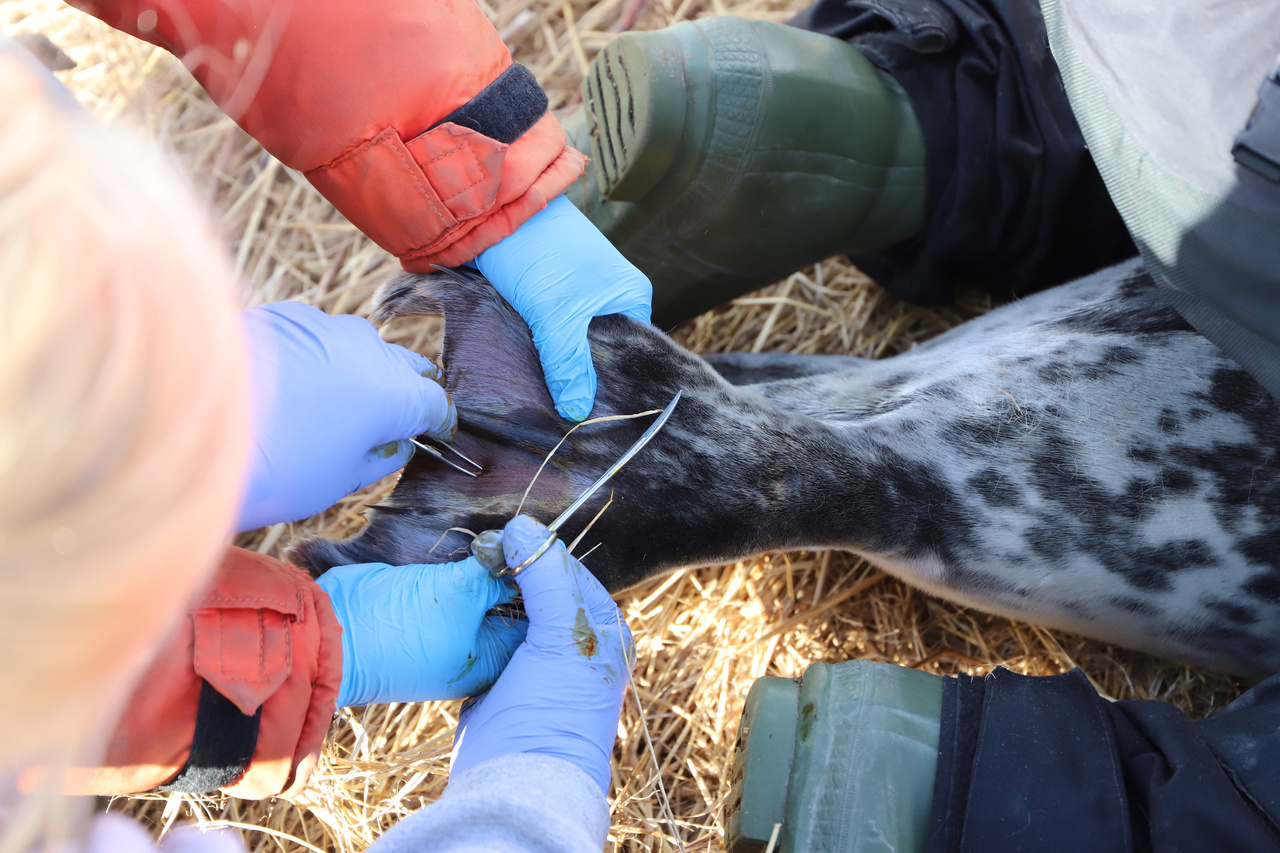 Pups are captured on land, not in the water. Scientists outfit each captured seal with a numbered flipper tag for identification. The entire process from capture to release usually takes less than 20 minutes.

Muskeget is a privately owned and uninhabited island six miles northwest of Nantucket. Monomoy National Wildlife Refuge is also a primary gray seal “haul-out” on the U.S. East Coast, although the number of pups born there is much lower than on Muskeget. Seal Island National Wildlife Refuge off the coast of Rockland, Maine is the largest gray seal pupping island in Maine. 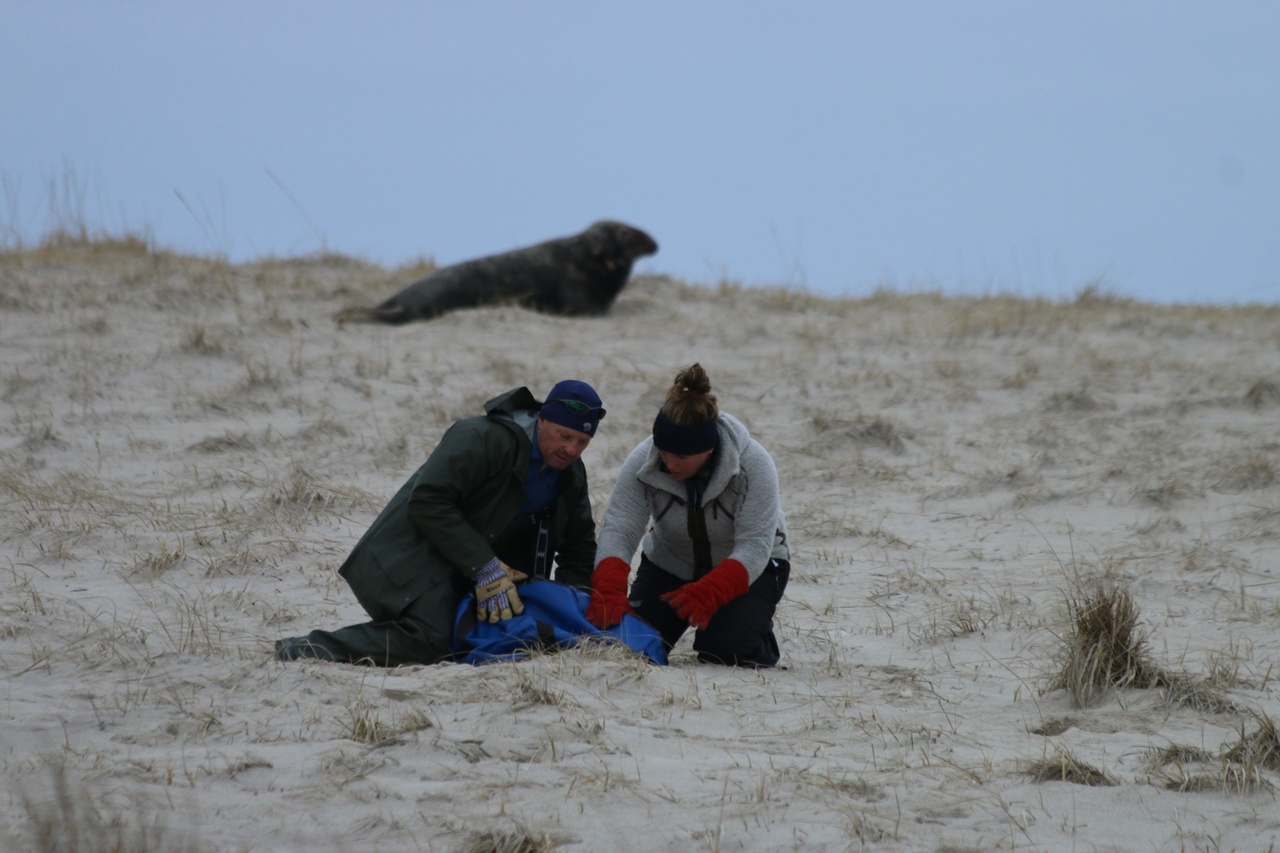 In 2013, Tufts University researchers began conducting long-term studies of the influenza A virus in gray seals. Their goal is to understand the prevalence of the virus in the population, how it transmits, and if it might affect other wildlife. Researchers expanded their health studies in 2015 to include seals at Monomoy, and in 2018 added Great Point on Nantucket. The team is also looking at morbillivirus, the primary cause of Northeast seal mortality in 2018.

Wendy Puryear is part of the Jonathan Runstadler Laboratory and is leading the project’s gray seal influenza work on Monomoy. “We want to understand what forms of virus circulate in the wild, why some animals are more susceptible to disease than others, and what factors impact disease spread and severity,” she said.

Each year the team has found that about 10 percent of the seal pups show evidence of influenza A. A higher percentage have antibodies for the virus. Preliminary results suggest that dominant forms of influenza exist within the population, but a broad range of subtypes can infect gray seals.

The scientific team for the 2020 gray seal pup studies at Muskeget comprised researchers from:

Monomoy National Wildlife Refuge is operated by the U.S. Fish and Wildlife Service. 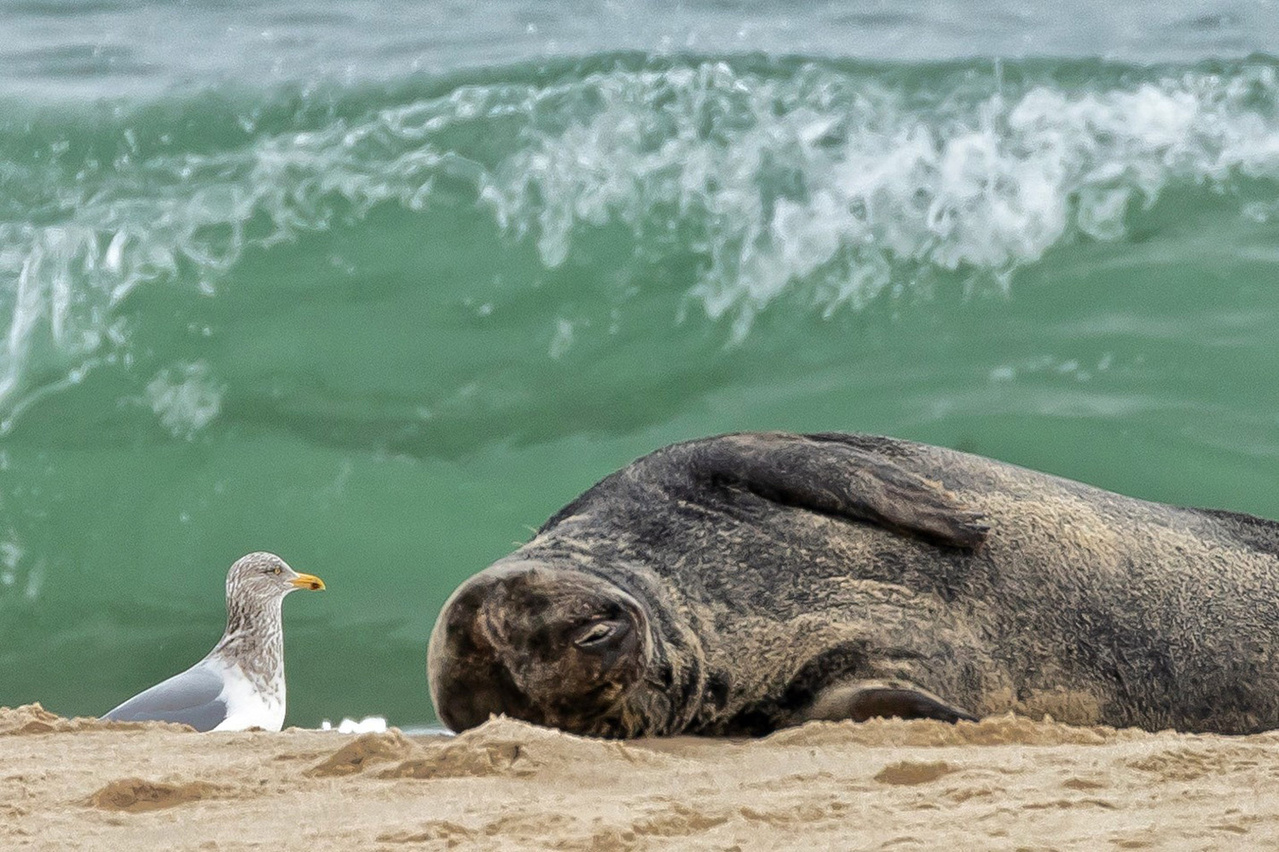