We use passive acoustic techniques to monitor Alaskan waters for marine mammals and the natural and manmade noise in their environment. Passive acoustics means we just listen and record sounds in the ocean, rather than sending sound into the water as in sonar or other active acoustic methods. 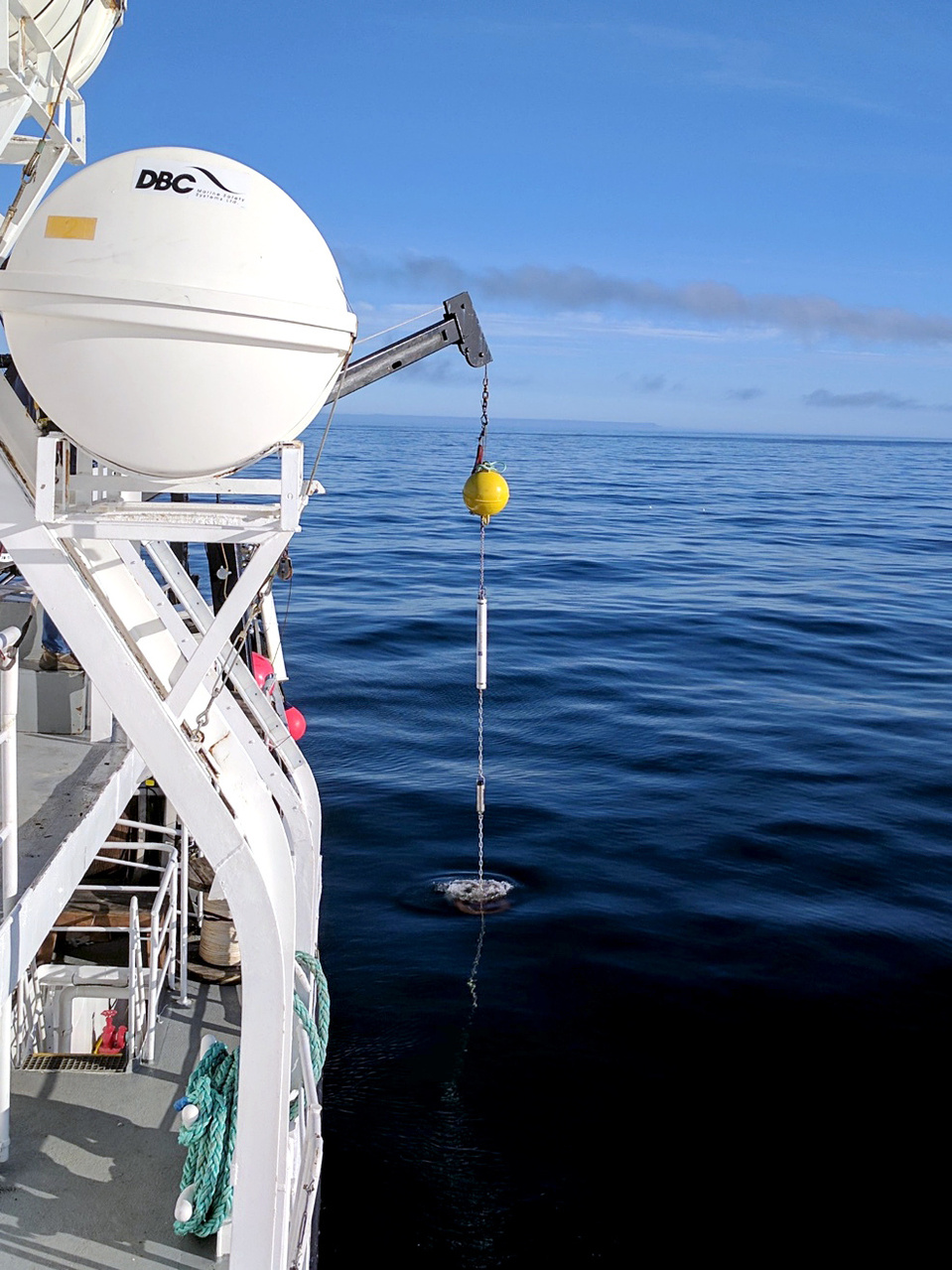 Long-term passive acoustic recorder moorings are deployed every year or half-year. Data are extracted after retrieval and processed back in Seattle.

Listen to Marine Mammals in Alaska

We listen for eleven different species of marine mammals including bowhead, gray, North Pacific right, humpback, minke, walrus, beluga, and killer whales; ribbon and bearded seals; and walrus. We also monitor for and measure environmental and manmade noises from sources such as ice, vessels, and seismic airguns. This allows us to monitor the persistence of these non-biological sources and their overlap with marine mammal presence.  We can then measure just how much noisier they make the environment for these animals that rely heavily on sound for communication, navigation, and finding food.

Passive acoustic monitoring remains the best tool for large-scale, year-round assessment of marine mammal locations and of ambient noise, especially in the harsh conditions of the enormous Alaska region.

The Marine Mammal Laboratory, with funding from the Bureau of Ocean Energy Management, has maintained an array of passive acoustic recorders throughout the Bering, Beaufort, and Chukchi Seas for nearly a decade.

The moorings are distributed throughout the main migratory pathways and wintering and summering grounds of many arctic and subarctic marine mammals, as well as in specific habitats of concern such as that of the endangered Cook Inlet beluga whales. This array provides long-term monitoring of migration and distribution patterns of arctic species as well as the potential expansion of subarctic marine mammal species (e.g., humpback, fin, killer, and minke whales) into the Arctic, and increased levels of manmade noise there.

Around half of the recorder moorings are co-located with biophysical moorings that collect crucial concurrent oceanographic and zooplankton data, allowing for integrative ecosystem-wide synthesis of the data.

Specialized long-term moorings have been adapted for the coastal high-current/silt/debris laden waters of Cook Inlet, Kotzebue Sound and Yakutat Bay.  These moorings are also equipped with echolocation loggers that can differentiate among whale species and document feeding behavior.

Sonobuoys are expendable short-term listening devices that allow us to monitor marine mammals and other sound sources while underway on research cruises.

A sonobuoy lasts from 1 to 8 hours. The sound signal is transmitted from sonobuoy to ship or aircraft via a VHF antenna. The data are analyzed in real-time.

Sonobuoy signals provide directional information that can be used to find a calling animal’s location.

Passive acoustics have proven invaluable for our work monitoring the critically endangered eastern population of North Pacific right whales. This remnant population, which endured a double whammy of legal whaling in the 18th and 19th centuries followed by illegal whaling in the 1960s, now numbers in the tens of animals.

The high cost of conducting dedicated shipboard surveys to study so few whales in a remote and vast area necessitates finding the whales quickly on surveys so no time is wasted looking for them. We also need ways to monitor for their presence when surveys cannot be conducted. Sonobuoys have been instrumental in improving our ability to find North Pacific right whales during both ship and aerial surveys, especially in the foggy/windy/rainy Bering Sea! In addition, the long term moorings we’ve deployed since 2006 along the Bering Sea shelf have allowed us to monitor the seasonality and spatial distribution of North Pacific right whales during this period of rapid climate change. Being able to expand our spatial coverage of the Bering Sea and Gulf of Alaska is something we are currently striving to achieve through our collaboration on the Saildrone project. 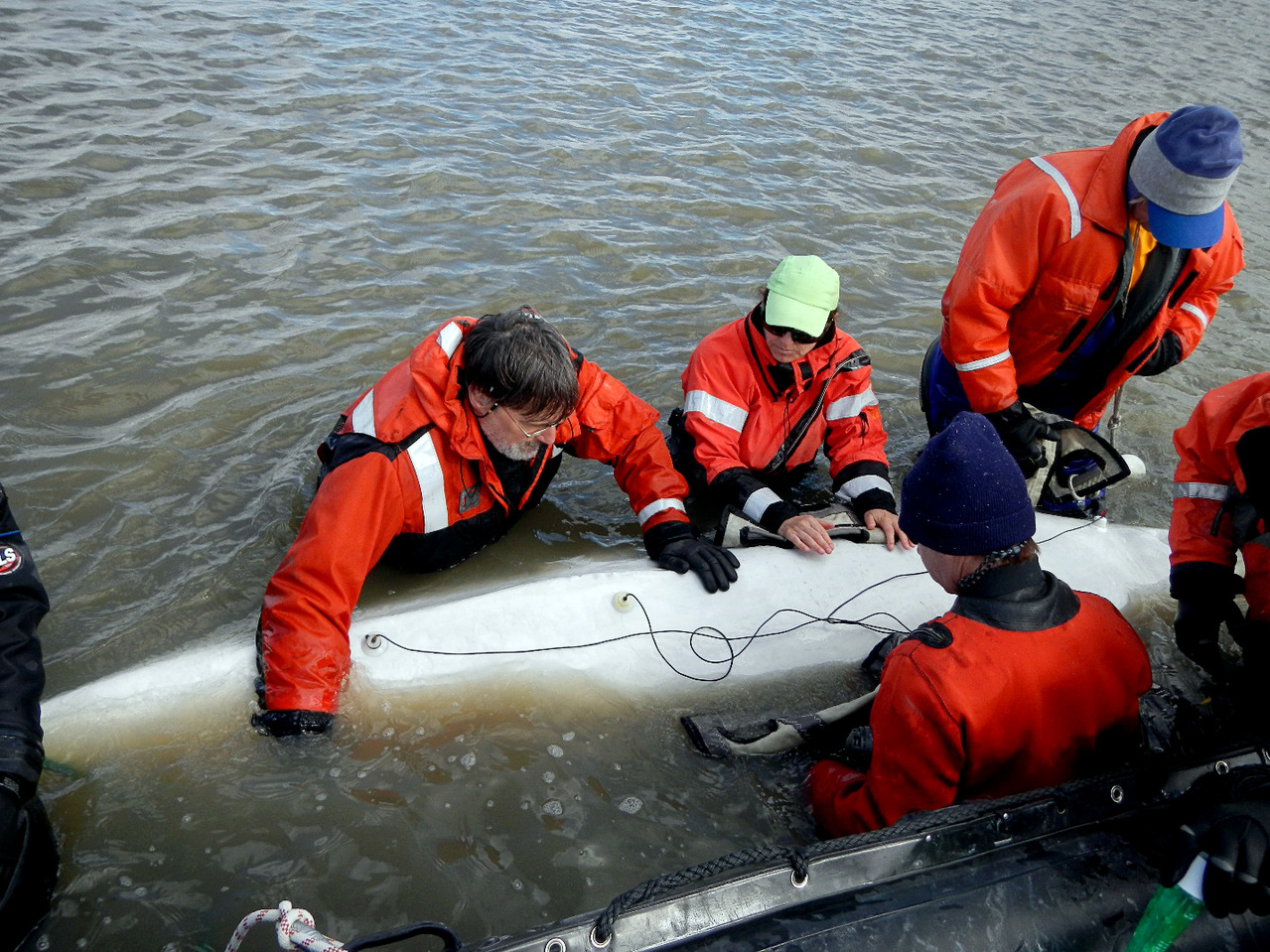 Tagging Whales to Study Foraging Behavior and Effect of Noise

We attach multisensor acoustic tags to dolphins and whales to record vocalizations from the tagged whale and other nearby animals, background noise the tagged animal is exposed to, the whale’s acceleration in three dimensions, and its depth. We use these tags to study beluga whale foraging behavior and to better understand how manmade noise might disturb them.

We test the hearing of Bristol Bay beluga whales using auditory evoked potentials—the same technique used with human babies in hospitals. We expose the whale to a subtle tone and measure its brain response with skin electrodes embedded in soft silicone suction cups. This research is providing the first description of hearing in wild whales—information critical to evaluate potential effects of manmade noise on this sentinel species of the Arctic ecosystem. This research is a collaboration with Woods Hole Oceanographic Institution. 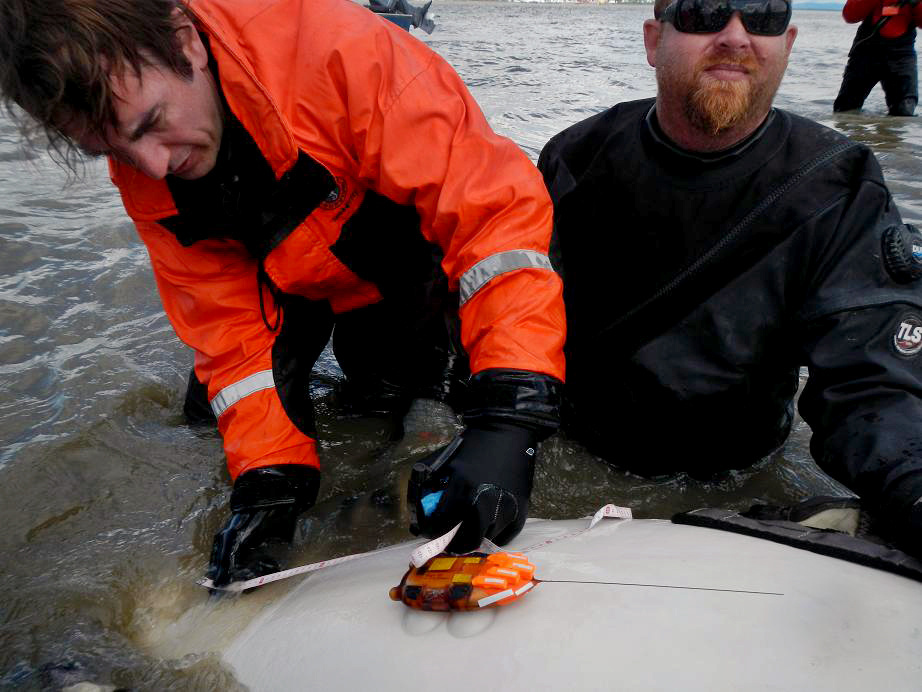