NOAA Fisheries has received a request from the Makah Indian Tribe for a limited waiver of the Marine Mammal Protection Act moratorium on take of gray whales. In response, NOAA Fisheries has announced a proposed waiver and regulations, as well as a hearing and how interested parties can participate. Can you please provide some context on this issue?

On February 14, 2005, NOAA Fisheries received a request from the Makah Indian Tribe for a limited waiver of the Marine Mammal Protection Act (MMPA) moratorium on take of Eastern North Pacific gray whales (Eschrichtius robustus). The Tribe requested that NOAA Fisheries authorize a tribal hunt in the coastal portion of the Tribe’s usual and accustomed fishing area for ceremonial and subsistence purposes and authorize the making and sale of handicrafts created from the harvested whales. The MMPA imposes a general moratorium on the taking of marine mammals but authorizes the Secretary of Commerce to waive the moratorium and issue regulations governing the take of marine mammals if certain statutory criteria are met.

On April 5, 2019, we published a proposed rule to issue a waiver under the MMPA and proposed regulations governing the hunting of eastern North Pacific gray whales by the Makah Tribe for a 10-year period and a related notice of hearing before an administrative law judge to consider the waiver and proposed regulations. NOAA Fisheries’ decision on whether to waive the moratorium and issue regulations involves “formal rulemaking” and must be made on the record after an opportunity for an agency hearing on both the proposed waiver and regulations. That hearing took place on November 14-21, 2019 before Administrative Law Judge George J. Jordan in Seattle, Washington. The hearing was publicly conducted and reported verbatim by an official reporter.

On September 23, 2021, the ALJ transmitted his recommended decision to the Assistant Administrator for NOAA Fisheries along with the hearing transcript and other required documentation. These documents—and public comments on them—will inform NOAA Fisheries’ final decision on the Makah Tribe’s waiver request.

To see a timeline, past documents, and past comments, please visit: Makah Tribal Whale Hunt

The 1855 Treaty of Neah Bay between the Makah Tribe and the U.S. expressly provides the Tribe the right to hunt whales. The Ninth Circuit Court of Appeals has specified the process the Tribe must follow to exercise that right, including seeking a waiver of the Marine Mammal Protection Act (MMPA) and obtaining the necessary permits from NOAA Fisheries. It would also be up to NOAA Fisheries to establish regulations for a hunt. Both NOAA Fisheries and the Tribe are following that process.

In 2005, the Tribe requested that NOAA Fisheries grant a limited waiver of the MMPA take moratorium to resume treaty-based hunting of ENP gray whales in the Tribe’s usual and accustomed fishing area for ceremonial and subsistence purposes. In the 2015 DEIS, we examined different options for conducting such a hunt, including how many whales could be killed, and during what time of the year. We have since considered the hundreds of public comments we received on the DEIS and continued our analysis of restrictions for any hunt. In addition, we have used the latest research on the population size and structure of the Eastern North Pacific stock of gray whales to assess the potential impacts of the proposed hunt on the stock, and – as required under the MMPA – concluded that the small number of animals that could be taken will not disadvantage the stock.

Does this decision grant the Makah Tribe’s request to hunt gray whales?

No. The ALJ’s recommended decision will be subject to a 20-day public comment period after which NOAA’s Assistant Administrator for Fisheries, who oversees NOAA Fisheries, will decide whether to go forward with the waiver and final regulations.

How soon could the Makah Tribe hunt whales, if granted permission?

It is too soon to say if or when the Tribe might resume such hunts. As described in the flowchart below (Figure 1), there are many additional steps and processes in our review of the Tribe’s request. 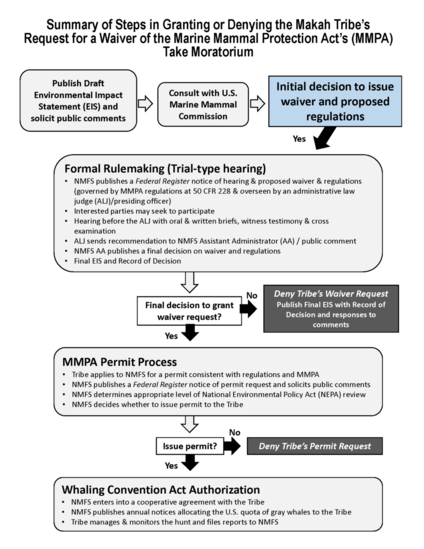 Will hunting jeopardize gray whales on the West Coast?

The proposed Makah hunt would remove at most 2-3 whales per year from the estimated population of more than 20,000 Eastern North Pacific gray whales that migrate along the West Coast. NOAA Fisheries scientists monitor the gray whale population closely through regular stock assessments and recently concluded that the stock has fully recovered from the days of commercial whaling and has been stable since the mid-1990s. Recent stock assessment reports for ENP gray whales estimated that 600-800 individuals could be removed annually from the population without affecting the stock’s optimum sustainable population size, which is the level that achieves maximum productivity of the population, keeping in mind the carrying capacity of the habitat and the health of the eastern Pacific Ocean ecosystem upon which the whales rely.

What rules would the Tribe have to follow in hunting whales?

The proposed regulations governing the Tribe’s hunt are detailed in the Federal Register notice, and include harvest limits on gray whales, time and area restrictions, use of gray whale parts (including tribal handicrafts), and hunt monitoring. The basis for the various provisions in these regulations stem from the 2015 DEIS in which NOAA Fisheries analyzed several hunt alternatives, including the Tribe’s proposal. The different alternatives consider a number of factors including impacts on other wildlife and public safety, and each one takes a different approach to protect a smaller group of Eastern North Pacific gray whales known as the “Pacific Coast Feeding Group” or that feeds in the Northwest throughout the summer. The proposed regulations also consider the need to provide protection for gray whales from the western North Pacific stock, which are far fewer in number (approximately 200 animals) than those from the Eastern North Pacific stock.

On September 29, 2021, NOAA Fisheries published a Federal Register notice announcing a 20-day public comment period on the ALJ’s recommended decision. Also, on February 27, 2020, we announced our intent to prepare a supplement to the 2015 Draft Environmental Impact Statement (to be published after the comment period noted above). That supplement will also invite public comment and take into account the administrative law judge’s recommendation and public comments on that recommendation. The Assistant Administrator for NOAA Fisheries will consider all of this information prior to making a final decision on the Makah Tribe’s waiver request.

Where can I get more information?