In our last update on the progress of the Hawaiian Islands Cetacean and Ecosystem Assessment Survey (HICEAS), the NOAA Ship Reuben Lasker had finished three of its four survey legs. In this, our final installment of the HICEAS 2017 blog series, I report on the fourth and final survey leg of the Lasker, which marks the end of HICEAS 2017. After a six-day in-port, the Lasker departed Honolulu with 14 members in the science team. Our goal for Leg 4 was to survey as many of the remaining transect lines in the eastern portion of the study area as possible, and then complete a 10-day transit back to the home port of the Lasker in San Diego, CA (from Hawaii to San Diego at the speed of a bicycle).

Although swells and winds were challenging, we successfully conducted visual line-transect and acoustic towed array surveys of cetaceans (whales and dolphins) along almost all of the remaining transect lines north of the main Hawaiian Islands. We also continued other operations, including conductivity, temperature, and depth (CTD) sampling, sonobuoy stations, and a strip transect survey for seabirds. However, our leg was unexpectedly cut short on November 30th when, only hours from completing our final study-area transect and beginning the long transit home, the ship was instructed to return to port in Honolulu instead of San Diego.

We found ourselves back in Honolulu on December 1st, where we packed up all our gear and ended the project nine days earlier than expected. Our shortened leg was nonetheless a success, finishing nearly 890 nautical miles of transect lines and yielding 32 sightings of at least 10 cetacean species. The acoustics team detected 98 cetaceans representing at least 13 species. Minke whales, with their infamous “boing” vocalizations, were heard most frequently and became a near-daily presence (minke whale soup). The acousticians also heard sei whales for the first time during HICEAS 2017 as a result of a sonobuoy deployment. The seabird observers saw 921 seabirds representing at least 27 species during their strip transect effort and counted 2,960 seabirds of at least 15 species in 22 feeding flocks. Three of the feeding flocks were associated with cetaceans, including false killer whales, spotted dolphins, and dolphins that were not identified to species. 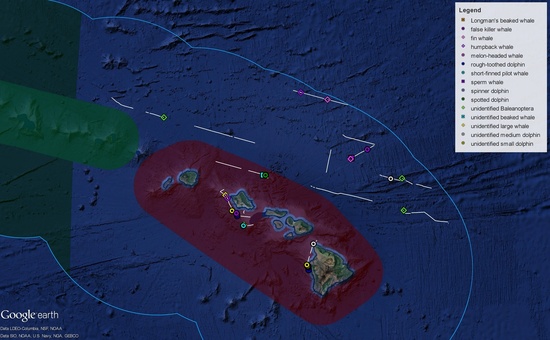 Daytime survey effort (white lines) and cetacean sightings (see legend) made within the Hawaiian EEZ (blue line) during HICEAS 2017 Leg 4 aboard the Reuben Lasker. The red shading is a focus area around the main Hawaiian Islands, and the green shading is the Papahānaumokuākea Marine National Monument, with darker shading where the Monument was expanded in 2016.

As during previous HICEAS legs, we had multiple false killer whale detections and implemented the two-phase Pseudorca Protocol. We had four successful passes in “Phase 1” (where we localized subgroups along the transect using acoustic and visual methods, which can stretch on for many, many miles!) and one successful “Phase 2” (where we turned back and approached as many subgroups as possible to get better estimates of subgroup sizes). We were able to launch the small boat on one of the false killer whale sightings and obtain many photos and three biopsy samples. 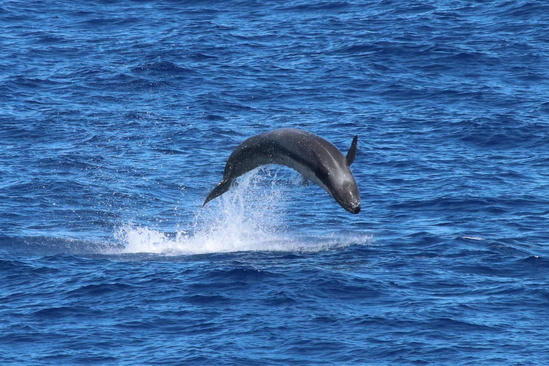 Another highlight of the leg was a group of two fin whales, which we initially detected visually. After deploying a sonobuoy near the sighting, we immediately started getting the classic 20 hertz pulses in the general direction of the whale. We dropped another sonobuoy when the visual team had a re-sighting, and were able to localize both whales­–this was the first time during HICEAS that we matched visual and acoustic detection angles in this way. The animals were traveling slowly, so we spent some time obtaining fabulous photos and making a few biopsy attempts from the Lasker.

Our final noteworthy event was just after we broke off our final transect on November 30th to return to Honolulu. Moments later, we suddenly found ourselves in a crazy burst of activity on both the flying bridge and in the acoustics lab–­a confusing mess of sperm whales, Longman’s beaked whales, and short-finned pilot whales, with a fin whale thrown in for good measure. The acoustics team furiously recorded all the vocalization details reflected on their busy computer screens, and the visual team scrambled to sort out what-species-was-where ahead of the ship. Unfortunately, none of the animals came close enough for great photos, but it was a memorable moment for sure, illustrating that things are often “boom-or-bust” out here in the marine realm, especially in the waters far offshore of the Hawaiian Islands.

Well, after 179 days at sea, 345 sightings and 766 acoustic detections of at least 23 cetacean species (21 inside the Hawaiʻi study area), and several thousand sightings of at least 45 species of seabirds, HICEAS 2017 is complete! Considered collectively, the cetacean sightings illustrate the boom-or-bust pattern in the study area quite nicely (see map below). Some survey transects had no sightings at all, and some had many groups of different species. This result underscores the­–often hidden–­features of our ocean ecosystems that determine species distribution and abundance.

Daytime survey effort (white lines) and cetacean sightings (see legend) made within the Hawaiian EEZ (blue line) during HICEAS 2017 aboard the Oscar Elton Sette (three legs) and Reuben Lasker (four legs). The red shading is a focus area around the main Hawaiian Islands, and the green shading is the Papahānaumokuākea Marine National Monument, with darker shading where the Monument was expanded in 2016.

Now, the analysis effort begins. Over the next several months, we’ll be working to derive new abundance estimates for the cetacean species we detected. There likely won’t be another HICEAS of this scale for several years. HICEAS 2017 was a gargantuan effort, and in the end, a huge success. We sincerely thank all the amazing scientists who collected high-quality visual, acoustic, and oceanographic data, as well the officers and crew of the NOAA Ships Oscar Elton Sette and Reuben Lasker­–we could not have done it without you!

The sun may have set on HICEAS 2017, but the invaluable data and memories will shine for years to come. Photo credit: NOAA Fisheries/Bernardo Alps.

All photos taken under research permit.