**Disclaimer: photos contained in this story feature dead sea turtles; all carcasses used in this study were sea turtles that died during cold-stunning events.

Sea turtle strandings are one of the few direct indicators of at-sea deaths. Data collected from stranded turtles provide critical information about cause of death, locations where threats occur, and more. The number of reported strandings only represents a minimum number of what is possibly occurring. The chances that a dead or injured sea turtle will drift ashore and be reported is influenced by many factors:

These factors, particularly those related to environmental conditions, are highly variable by location and time of year. Despite our awareness that these factors impact stranding numbers, there have been very few studies of this topic and none in the Gulf of Mexico.

Scientists deployed both sea turtle carcasses and wooden effigy drifters with satellite tags to study stranding probability and locations in the northern Gulf of Mexico. An effigy is an often life-size sculptural representation of something—usually a person, but in this case a turtle. Once the carcasses beached, scientists quickly removed the GPS tracking device. They left the carcass on the beach to see if it would be reported to the local stranding responders. This allowed scientists to track reporting rates. Many potential factors determine whether drifting sea turtles are deposited on shore, discovered by people, and reported to stranding networks resulting in successful documentation.

Season and distance from shore greatly influenced beaching results. During the spring, the period of greatest strandings in this region, the chances of a sea turtle carcass beaching is about 37–50 percent. During summer months when relatively few strandings are documented, the probability of a carcass beaching dropped to only 4–8 percent. Low summer stranding rates were likely due to:

Only 22 percent of beached carcasses were reported due to infrequent (11 percent) reporting on local barrier islands.

In May and June 2021, additional effigies were released in the waters off of the south Texas coast to study the potential drift patterns of sea turtle carcasses in this part of the Gulf of Mexico. This was a large collaborative effort involving assistance from:

All of this work helps us better understand potential at-sea mortality locations and threats so that mitigation measures can be developed to protect threatened and endangered sea turtle populations.

Watching for Migrating Right Whales is More Important Than Ever 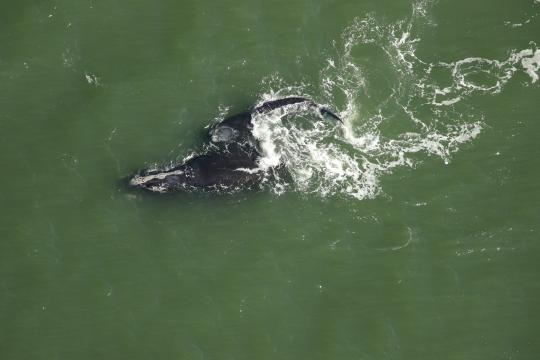