The endangered North Atlantic right whale population has been declining for the past decade. With fewer than 400 whales left, researchers closely monitor the southeastern United States for new offspring during the calving season.

The births this calving season are particularly important and encouraging because the species has suffered a serious Unusual Mortality Event since 2017, which has resulted in more than 10 percent of the population either dead or seriously injured. The primary causes of the Unusual Mortality Event are entanglements or vessel strikes. In addition, there are fewer breeding females producing fewer calves each year, which is also preventing the species from recovering. Researchers estimate there are fewer than 100 reproductively active North Atlantic right whale females remaining.

Meet the Mothers and Calves of the 2021 Season

Every identified North Atlantic right whale has an assigned four-digit number in the Right Whale Catalog. Researchers assign names to whales that have a unique physical feature or a strong story in connection to a community or habitat where they were seen.

Right whale #3593 was first sighted with her calf off Lea-Hutaff Island, North Carolina, on March 11, 2021. #3593 is approximately 16 years old and this is her first documented calf.

A right whale known as "Giza" and her calf were sighted east of the St. Johns River entrance, which is near Jacksonville, Florida, on March 4, 2021. Giza is at least 21 years old, and this is her third known calf.

A right whale known as “Monarch” was spotted with her calf off Vilano Beach, Florida, on February 12, 2021. Monarch is 27 years old, and this is her fourth known calf. It's been 11 years since she had her last calf.

Bocce was seen with her new calf off Amelia Island, Florida, on January 13, 2021. Bocce is 13 years old and survived a vessel strike in 2011 as a juvenile. She went on to have two known calves, including this year’s calf.

Right whale #2420 was seen with her new calf off the coast of Florida on January 11, 2021. She is at least 27 years old and this is her fifth known calf. #2420 has only been sighted in seven of the last 27 years, mostly in the calving areas. She was first sighted in 1994 with a calf, but wasn’t sighted again until 2002 when she was seen with another calf. Her 2011 calf (#4120) was sighted in the calving grounds this year and is at an age where she could calve herself.

A right whale known as “Binary” and her calf were sighted off Amelia Island, Florida, on January 9, 2021. Binary is at least 21 years old and this is her third known calf. She previously calved in 2005 and 2011. She was discovered entangled shortly after having her 2011 calf but was able to shed the gear.

“Minus One,” who is 27 years old, and her new calf were sighted just offshore of South Ponte Vedra Beach, Florida, on January 8, 2021. Minus One survived a vessel strike sometime before the fall of 2002, when several healed shallow lacerations along her right flank were discovered. She went on to have two female calves in 2007 and 2010 (#3730 and #4030) before halving her third calf this year.

"Magic" was seen with a calf off Little Cumberland Island, Georgia, on January 4, 2021. Magic is 39 years old, and this is her seventh known calf. Magic’s six previously known calves were all born every two to six years until 2011—her last known birth until now. Magic, #2420, #3130, and Binary were all 2011 moms that did not calve again, that we know of, until this year. Four of Magic's previous calves have been seen in recent years.

Right whale #3942 was sighted with her calf off Hilton Head, South Carolina on December 17, 2020. #3942 is 12 years old and this is her first known calf. #3942 is the daughter of Kleenex (#1142), who has had at least seven calves. In mid-April 2018, disentanglement experts attempted to free Kleenex from fishing rope. It had been wrapped around her jaw for at least three years, impacting her ability to eat. They were able to partially cut the line on Kleenex, but have not sighted her since July 2018.

On December 6, 2020, NOAA Fisheries partner Florida Fish & Wildlife Conservation Commission spotted a right whale calf swimming with a pod of bottlenose dolphins off Vilano Beach, Florida. Millipede is 16 years old and survived a vessel strike as a calf. She went on to have two known calves, including this season’s calf.

The first live North Atlantic right whale calf of the season was spotted by Clearwater Aquarium biologists off Cumberland Island, Georgia, on December 4, 2020. The mother, Chiminea, was born in 2008, and this is her first known calf. She was disentangled from U.S. trap pot gear in 2011 as a juvenile. Without those disentanglement efforts, she may not have survived and calved this year.

Chiminea's mom (#1308) calved again in 2011, but was struck and killed by a vessel that year. Her 2011 calf is assumed to have died as well. #1308 had two additional known calves, including Snow Cone (#3560), a 2020 mom who made headlines with her trip to the Gulf of Mexico with her calf. Sadly, that calf was killed after being struck by a vessel off the coast of New Jersey a few months later. Snow Cone (#3560) is currently entangled despite disentanglement responders' attempts to free her.

A dead North Atlantic right whale calf was reported stranded on February 13, 2021, along the Florida coast. This is the first observed right whale death in U.S. waters in 2021. NOAA’s Office of Law Enforcement is investigating the incident. The animal is likely the 2021 calf of "Infinity" (#3230). The pair were first sighted off Amelia Island, Florida, on January 17, 2021. Infinity is 19 years old and this was her first known calf.

On December 22, 2020, a newborn calf was sighted off El Hierro, an island in the Canary Islands, which is a historic North Atlantic right whale habitat. The calf was not seen with a mother, and has not been seen since.

The right whale calving season begins in mid-November and runs through mid-April. Female right whales become sexually mature at about age 10. They give birth to a single calf after a year-long pregnancy. Three years is considered a normal or healthy interval between right whale births. But now, females are having calves every 6 to 10 years, on average. Biologists believe that the additional stress caused by entanglement in fishing gear is one of the reasons that females are calving less often.

Each fall, some right whales travel more than 1,000 miles from their feeding areas in the waters off New England and Canada to the shallow, coastal waters of North Carolina, South Carolina, Georgia, and northeastern Florida. The southeastern United States is the only known area where right whale females regularly give birth and nurse their young.

NOAA and partners conduct aerial and vessel surveys from North Carolina to northeast Florida throughout the calving season. Aerial and boat-based teams:

Stay Alert for Right Whales: How You Can Help

Calving season is an especially vulnerable period for these whales. This makes it extremely important for people to be aware of the whales' movement and migratory patterns. According to biologists, any disturbance could affect behaviors critical to the health and survival of the species.

To protect right whales, mariners should stay alert and keep their distance. We caution all boaters to be vigilant, slow down, and give these endangered whales plenty of room. Federal law requires vessels, paddle boarders, and aircraft (including drones) to stay at least 500 yards (five football fields) away from right whales. These restrictions are in place to prevent accidental collisions between right whales and boats and disturbing the whales.

To report a right whale sighting from North Carolina to Florida, especially a dead, injured, or entangled whale, contact NOAA Fisheries at (877) WHALE-HELP (877-942-5343) or the Coast Guard on marine VHF channel 16. Please report sightings from Virginia to Maine by calling (866) 755-6622. If safe, and from the legally required 500-yard distance, please take a photo and note the GPS coordinates to share with biologists. 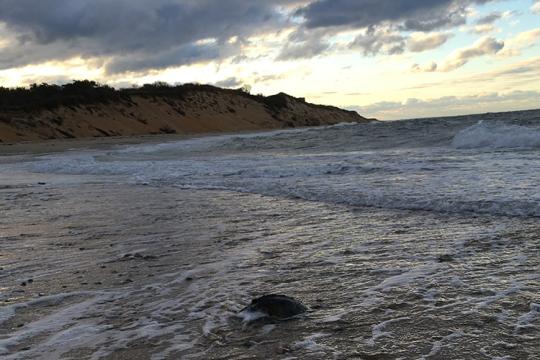