When there is a large die-off of marine mammals, experts from NOAA Fisheries and our partners try to identify the reasons for what's known as an Unusual Mortality Event, or UME. Unfortunately, in about half of UMEs, a cause is never determined. When there is a large die-off of marine mammals, experts from NOAA Fisheries and our partners try to identify the reasons for what's known as an Unusual Mortality Event, or UME. Unfortunately, in about half of UMEs, a cause is never determined.

That’s the case with the Large Whale UME declared in 2015 for large whales in British Columbia and the Gulf of Alaska, as well as the 2011 Alaska Northern Pinniped UME, which impacted four species of ice-associated seals, and walruses. The Working Group on Marine Mammal Unusual Mortality Events has closed both UMEs, although what caused those events remains a mystery.

What is an Unusual Mortality Event?

An Unusual Mortality Event (UME) is defined under the Marine Mammal Protection Act as “a stranding that is unexpected; involves a significant die-off of any marine mammal population; and demands an immediate response.”

In recent years, increased efforts to examine carcasses and live-stranded animals have improved the knowledge of mortality rates and causes, allowing a better understanding of population threats and stressors, and the ability to determine when a situation is “unusual.”

Understanding and investigating marine mammal UMEs is important because they can serve as indicators of ocean health, giving insight into larger environmental issues that may also have implications for human health and welfare.

Declaration of a UME brings more focus and resources to help the investigation, and enables NOAA Fisheries to form an investigative team.

Since the marine mammal UME program was established in 1991, there have been 65 formally recognized UMEs in the U.S., involving a variety of species and dozens to hundreds of individual marine mammals per event.

Causes have been determined for 32 of the 65 UMEs, and have included infections, malnutrition, human interactions, and biotoxins — such as those from harmful algal blooms.

With the closure of the 2015-2016 Large Whales in Alaska UME in December 2017, and the 2011-2016 Northern Alaska Pinnipeds UME in June 2018, there remain seven active UME investigations in the United States.

In the early summer of 2015, 12 fin whales were observed dead within a 27 day period around Kodiak Island and the western Gulf of Alaska. Due to the atypical nature of these strandings — the high number of mortalities, and short time and distance between strandings — NOAA declared an Unusual Mortality Event.

The number of fin whale strandings for the region that year was over 12 times the historical average. There was also a spike in large whale deaths off the coast of British Columbia at about the same time. The number of dead fin and humpback whales in the UME totaled 46 (34 in Alaska and 12 in British Columbia) from April 2015 to April 2016.

An international team of scientists have investigated possible causes of the mortalities including sonar and seismic testing, radiation, ship strike, infectious diseases, predation, algal toxin exposure, and starvation due to oceanographic changes.

A definitive cause of the UME was not determined, but scientists point to unusual ocean conditions as a likely factor.

“The strandings were concurrent with other anomalous physical and biological shifts in the 2015 Alaskan marine environment," said Dr. Teri Rowles, NOAA Fisheries' Marine Mammal Health and Stranding Response Program Coordinator. "The UME was likely one of a series of indices signifying broader, complex oceanographic change."

Unusual ocean conditions in 2015 included the presence of an ocean surface heat anomaly dubbed “The Blob,” one of the strongest El Niño weather patterns on record, and an extensive harmful algal bloom along the West Coast.

The Unusual Mortality Event was not repeated in 2016. Scientists are no longer documenting a marked increase in strandings, or a temporal shift in strandings of large whales in the Gulf of Alaska.

In the summer of 2011, researchers with the North Slope Borough Department of Wildlife Management in Utqiaġvik as well as coastal community members in the Bering Strait region began seeing an unusual number of stranded ringed and spotted seals exhibiting symptoms such as skin lesions, hair loss, and abnormal behavior.

Many of the more than 100 animals were dead when found, or died shortly after. There were also reports of similar cases in Russia, Japan, and Canada involving ringed seals, spotted seals, bearded seals, ribbon seals, and walruses. 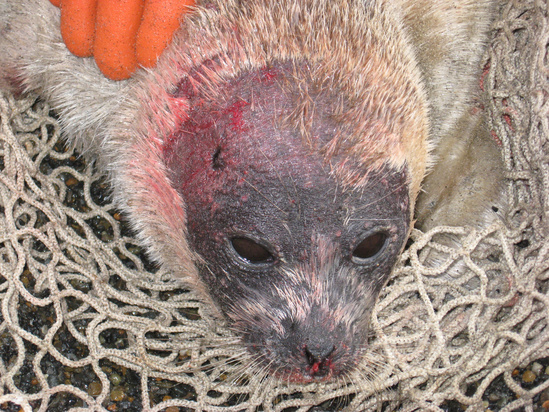 NOAA Fisheries declared the unusual marine mammal deaths a UME in December 2011. The agency gathered an international investigative team for the 2011 Alaska Northern Pinniped UME in an effort to determine the cause of the illness. Earlier, the UME had included Pacific walruses, but the tusked marine mammal was removed from the UME in May 2015 due to lack of cases.

The disease caused widespread public health and food security concerns in over 50 Alaska and Russian coastal communities along the coast of the Beaufort, Chukchi, and Bering seas where ice seals are essential to their nutritional, cultural, and economic well-being.

The minimum estimate of the total number of impacted seals was 657 seals, which included 179 subsistence hunted seals, 233 dead stranded seals, and 245 live seals that stranded or were sampled during permitted health assessments studies. The total number of affected ice seals from 2011-2016 remains unknown due to the remote nature and large geographic area that ice seals inhabit.

Although some seals are still being observed with some of the symptoms (e.g., hair loss), the high levels of mortality, which was a primary consideration under which the UME was declared, are not occurring like they were in 2011, and the other symptoms are seen at lesser rates than at the peak of the UME. As such, the conditions under which the UME was declared are no longer applicable, and the Working Group made the decision to close the UME in June 2018.

Post-UME monitoring will include ongoing collection of reports of any affected ice seals. Agencies and institutions will continue to collect blood, skin, and other tissue samples from healthy seals in captivity and from seals handled for research in the wild.

In Alaska, there have been three UME designations since the start of the official UME program in 1991: the sea otter UME in 2006, the northern pinniped UME initiated in 2011 affecting ice seals, and the large whale UME initiated in 2015. These UMEs have all been officially declared closed without a determination in what caused the events, though the sea otter event was found to be due to infection with Streptococcal organisms causing valvular endocarditis and encephalitis. In these two recent UMEs scientists will implement post-event activities to continue monitoring these populations of marine mammals in Alaska.

How to Report a Marine Mammal Stranding

Members of the public should immediately contact the Alaska Marine Mammal Stranding Network hotline at (877)925-7773 if they see a stranded or dead marine mammal.

In Canada members of the public should immediately contact the BC Marine Mammal Incident Hotline at (800)465-4336 if they see an injured, entangled or dead marine mammal.