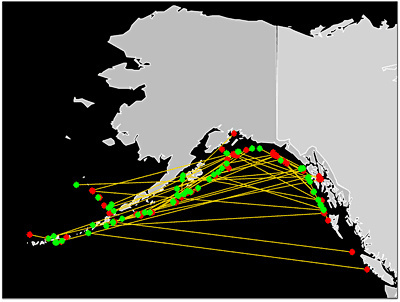 Several marine species have been extensively tagged using a variety of methods over the years in order to determine or estimate spatial distribution within a geographic range, migratory patterns, abundance, and growth. One such species with a lengthy history of tagging data is sablefish, Anoplopoma fimbria, in the northeast Pacific Ocean. Sablefish is a long-lived, highly mobile demersal species which inhabits the northeastern Pacific Ocean from Baja Mexico to the Gulf of Alaska, westward to the Aleutian Islands, and into the eastern Bering Sea.

Sablefish is one of the deepest dwelling commercially valuable species, with an ex-vessel value of over $100 million in 2010. Adult sablefish are generally found along the continental slope, shelf gullies, and in deep fjords. In contrast, juvenile sablefish (< 40 cm) spend their first 2-3 years on the continental shelf and in interior bays, moving into deeper waters along the slope as they age. Based on evidence from tagging studies and differences in growth rate and size at maturity, it is thought that there are two populations of sablefish: the Alaska population, found in Alaska and northern British Columbia waters, and the West Coast population, found in southern British Columbia, Washington, Oregon, and California waters.

The Alaska Fisheries Science Center's Alaska Sablefish Tag Program has released over 360,000 tagged sablefish in Alaska waters since 1972 and over 33,500 of those fish have been recovered by members of the fishing industry. Data from the releases and recoveries are maintained in the Sablefish Tag Database. These data have been used to examine movement patterns, evaluate areal apportionment strategies of annual catch quota, validate ageing methods, and examine growth. Many individuals have contributed to the success of the Sablefish Tag Program, from the biologists and crews of chartered vessels who have spent endless hours tagging sablefish, to the many fishermen, observers, and processors who have taken the time to take measurements and return recovered tags.

The following article summarizes release and recovery data within the tag database and describes the results of studies utilizing these tag data by the National Marine Fisheries Service and others on sablefish age, growth, and migration.