Learn what can be done to deter nuisance Steller sea lions in Alaska. 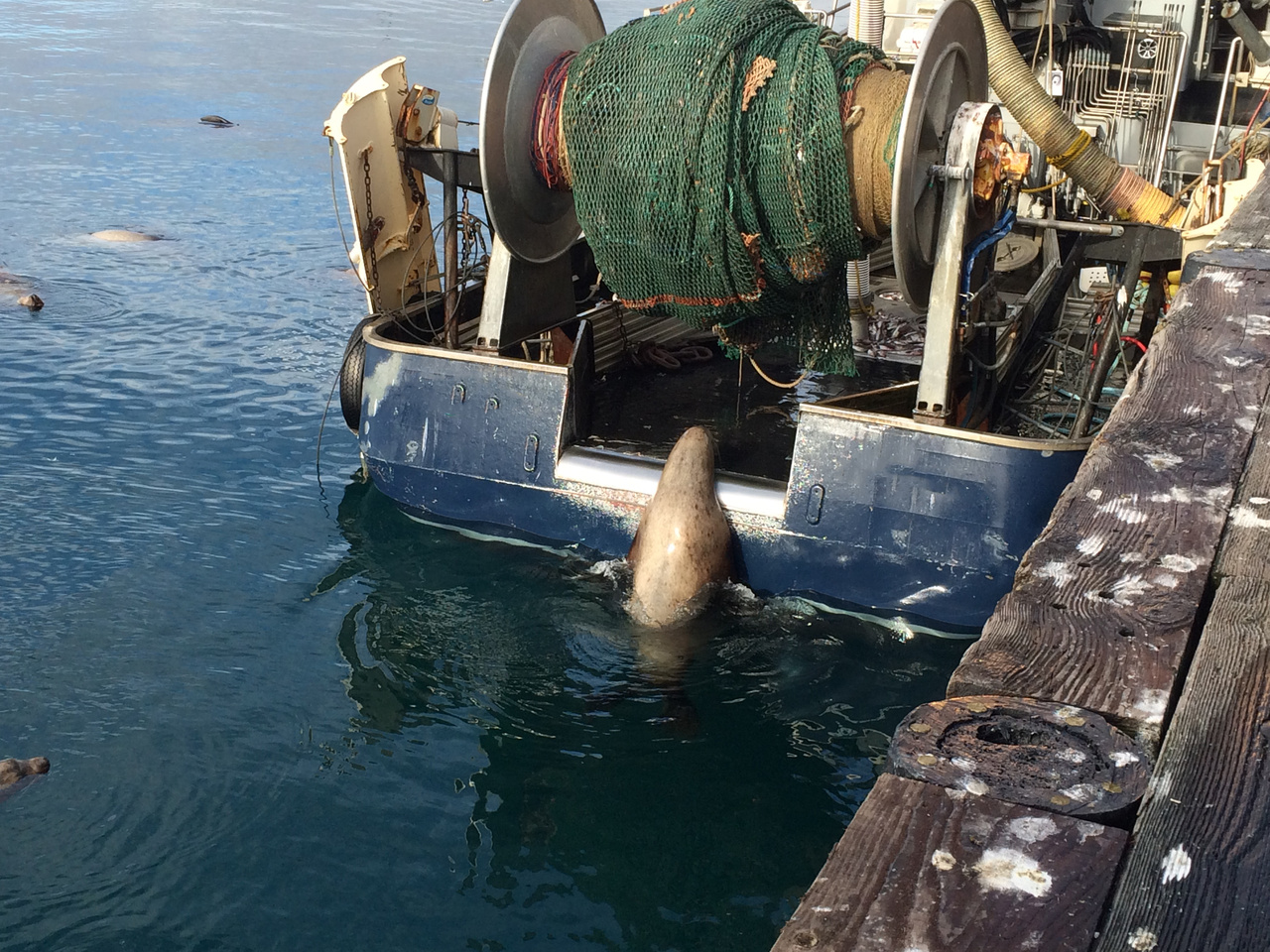 Steller sea lion getting on the stern of a trawler. Credit: Noah Meisenheimer.

What do I need to know about Steller sea lion protection?

What are the distinct population segments of Steller sea lions in Alaska? 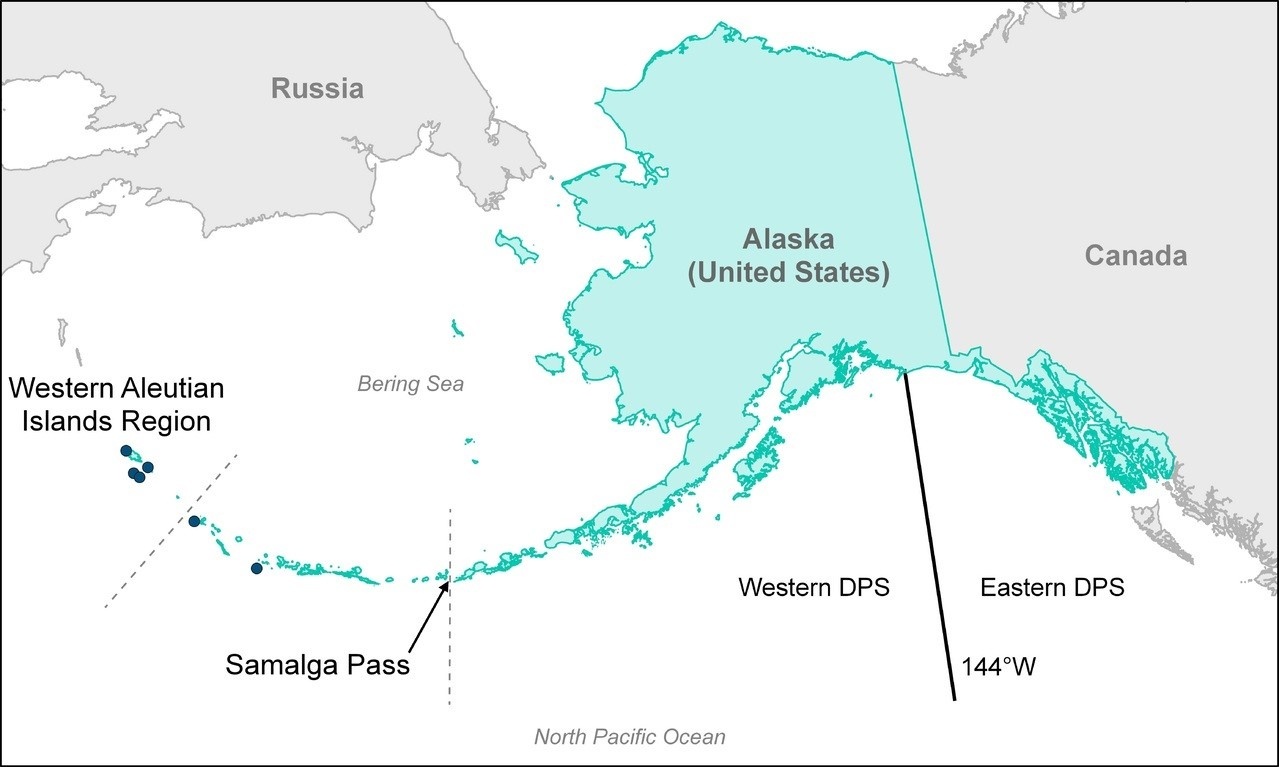 What can be done to deter nuisance Steller sea lions in Alaska?

Under the ESA, no person may haze or harass a Steller sea lion west of 144° W longitude.

The MMPA allows fishermen and public/private property owners to deter Steller sea lions east of 144° W longitude to protect private property, including gear and catch, so long as the deterrence does not result in serious injury or death.

East of 144° W longitude provided that the deterrence described below does not result in serious injury or death of Steller sea lions in the eastern distinct population segment:

I am a member of the general public. What can I do to deter Steller sea lions?

It depends on whether you are west or east of 144° W longitude (Cape Suckling):

What other important information do I need to know?

Personal safety: Even where property owners and/or fishermen are permitted to deter nuisance animals, using non-lethal means is a personal choice and can pose safety and legal risks to the person deterring the nuisance animal(s) and anyone around them. Sea lions are wild animals that may react unpredictably to deterrence attempts, resulting in personal injury or additional damage to property. Steller sea lions are large and powerful animals that can be aggressive and move as quickly as a person on land. As noted above, if a person ends up seriously injuring or killing the marine mammal, the person may be subject to prosecution under the MMPA and/or ESA.

Individuals attempting to deter nuisance sea lions do so at their own risk.

I am a commercial fisherman, what can I do to deter Steller sea lions? 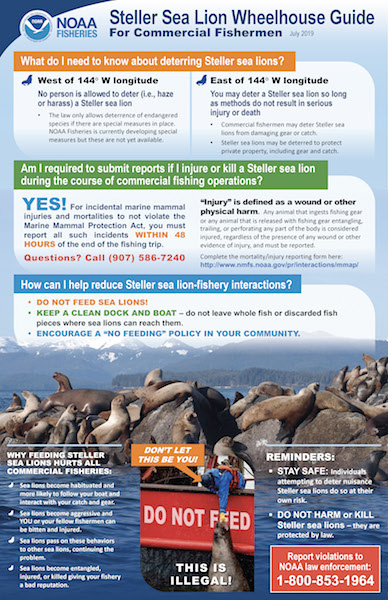 It depends on whether you are fishing west or east of 144° W longitude.

Am I required to submit reports if I injure or kill a Steller sea lion during the course of commercial fishing operations?

Yes! Under the MMPA, any vessel owner or operator, or gear owner or operator (in the case of non-vessel fisheries), participating in a fishery listed on the MMPA List of Fisheries must report to NOAA Fisheries all incidental mortalities and injuries of marine mammals that occur during commercial fishing operations, regardless of the fishery, within 48 hours of the end of the fishing trip or, in the case of non-vessel fisheries, fishing activity.

I am a harbor master, what can I do to deter Steller sea lions in the eastern distinct population segment?

Steller sea lions occasionally become habituated to human activity in harbors, and can become a nuisance or even a danger to people. Regulations under the MMPA allow government officials to deter marine mammals from areas frequented by humans, but currently government officials are not authorized to deter marine mammal species that are listed as threatened or endangered under the ESA. There is a national effort underway to develop guidelines for safely deterring marine mammals, including specific measures for deterring ESA-listed marine mammals, but these are not yet available.

In the interim, NOAA Fisheries recommends the following steps to discourage Steller sea lions from becoming a nuisance, or to deal with animals that pose a potential threat to human safety.

The most important factor in preventing negative sea lion behavior in harbors is to ensure that fish waste is disposed of properly and to eliminate any sources of food.

NOAA encourages all harbor masters to adopt the above measures, regardless of whether your harbor lies west or east of 144° W longitude.

If the above measures do not work and there is an aggressive sea lion in your harbor, contact NOAA Fisheries Protected Resources Division at (907) 586-7424 or (907) 586-7236. We may authorize additional specific deterrence methods on a case-by-case basis, with the understanding that whatever method is used must be conducted in a humane manner and cannot cause injury or mortality. If specific authorized measures are taken, records must be kept and sent to NOAA Fisheries explaining the animal’s behavior, deterrence measures taken, and the animal’s response to the deterrent.

NOAA Fisheries is not responsible for the removal of nuisance animals.

Any instances of sea lions injuring people or placing the public at physical risk should be reported immediately to the NOAA Fisheries Office of Law Enforcement at (800) 853-1964.